Samsung announced the Exynos 980 mid-range chip two months ago. It’s the first mobile processor from the company to feature an integrated 5G modem. This solution will enable 5G connectivity to trickle down to more affordable devices.

Chinese smartphone manufacturer Vivo had confirmed that it was working on a smartphone that will be powered by the Exynos 980. Samsung and Vivo have scheduled a press conference in Beijing tomorrow where this device is likely going to be unveiled.

Samsung and Vivo to conduct a joint press conference tomorrow

It appears that the first smartphone to use Samsung’s integrated 5G modem is not going to be one from the Korean giant itself. The “vivo X Samsung 5G AI chip press conference” has been scheduled for tomorrow in Beijing where the handset, believed to be the Vivo X30, might become official. Even if Vivo doesn’t actually unveil the device tomorrow, we’ll certainly get to hear more details about their partnership with Samsung.

Samsung has based the Exynos 980 on its 8nm FinFET process technology. It features an octacore processor with two 2.2Ghz Cortex-A77 cores and six 1.80GHz Cortex-A55 cores. The chipset also features a Mali-G76 MP5 GPU. There’s support for UFS 2.1 storage and WQHD+ (3360×1440) display, in addition, to support for a single 108MP camera system or a 20MP + 20MP dual camera system.

The chip features an onboard neural processing unit for AI tasks. It should allow for enhanced AI-based camera features, content filtering, user authentication and more. What stands out about this chip is its integrated 5G modem. It supports everything from 5G down to 2G and is also compatible with the new Wi-Fi 6 standard.

Samsung previously said that it will begin the mass production of the 5G Exynos 980 by the end of this year. So it’s possible that the Vivo device it will debut in may not hit the market for several weeks. Samsung’s own devices may start featuring this chip from early next year. 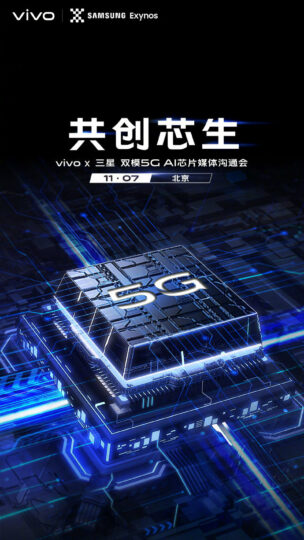