Samsung’s next foldable phone, the Galaxy Z Flip, is set to go official in less than three weeks. Unlike the Galaxy Fold, which has a book-like form factor that opens into a tablet-sized screen, the Galaxy Z Flip will have the old-school flip phone form factor. The folding and unfolding action will still be handled by Samsung’s complex and advanced hinge mechanism, though, and it seems the hinge will allow users to open and fix the Galaxy Z Flip’s screen at any angle.

This has an important benefit, for those wondering. By opening the Galaxy Z Flip’s display at a 90 degree angle, you could place the phone down on a surface and take a photo or video from afar by having the upper half of the display pointing towards you. Samsung actually teased this ability of the Galaxy Z Flip to open halfway and stay that way back at its developer conference last year (see the picture below), and it could very well be the feature that distinguishes the Galaxy Z Flip from the Galaxy Fold and Motorola’s new Razr phone.

The fact that the Galaxy Z Flip will be able to stay open at an angle makes Samsung’s use of a glass layer on the phone’s inner display even more impressive. Yes, unlike the Galaxy Fold, the folding display on Samsung’s upcoming foldable phone won’t be as fragile as it will have a layer of ultra-thin glass on top, although it remains how the integrity of that glass will hold up over time if the device is often opened at an angle and kept that way. 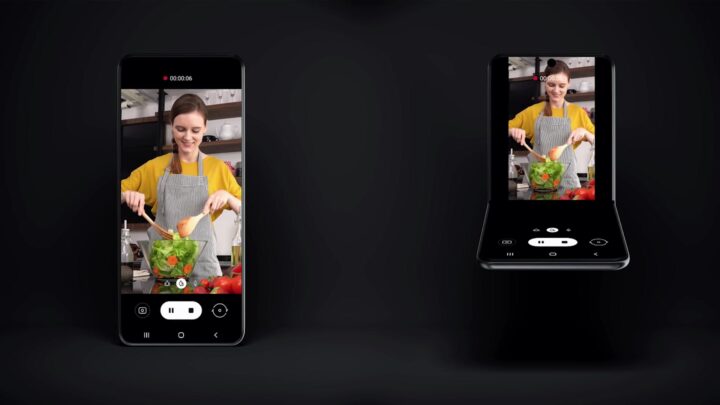