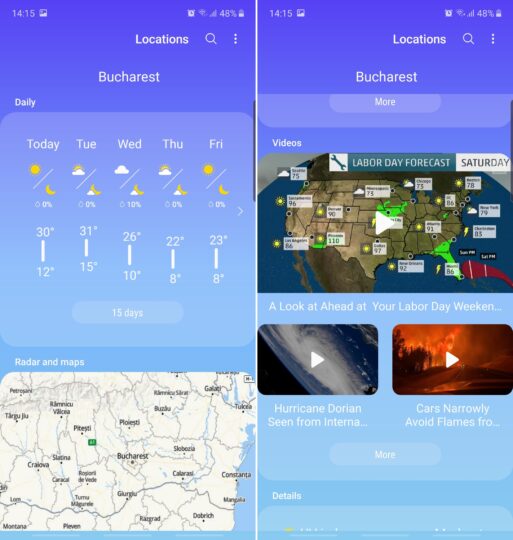 Samsung’s press release on the matter states that the latest additions are currently available only for the Galaxy Note 10 series, but this is not entirely true. The features did ship with the Note 10 series (or at the very least they were enabled shortly after the Note 10 debuted) but it now looks like they’re making their way onto other devices. The same Weather widget features are also available on the Galaxy A50s as well as the Galaxy Tab S6, although the latter lacks the video section. Either way, the latest additions seem to be targeting One UI 1.5 rather than the Galaxy Note 10 lineup, so if you own a Galaxy device running One UI 1.5 then you might want to check and see if these new Weather features are already available for you.

Do keep in mind that the new features have not been released worldwide. Samsung claims that they have not yet launched in China, Japan, and Korea. Another caveat is that the videos shared by The Weather Channel’s editorial team are available only in English and Spanish. Furthermore, weather alerts are supported in a few dozen countries. You can check Samsung’s official announcement and see if your country is listed.

More news »
New Good Lock module customizes your home screen and app drawer By Mihai M.|1 month ago
Galaxy S20, S20+, and S20 Ultra Wireless PowerShare guide By Dominik B.|2 months ago
Samsung reportedly developing One UI 2.5 for its smartphones By Asif S.|2 months ago
Samsung will bring One UI 2.1 update to Galaxy S9, S10, Note 9/10 series By Mihai M.|3 months ago
SamMobile Shop
Opinions More »
Samsung’s in trouble with its diehard fans and they’re running out of patience
9 hours ago