Samsung Pay Card is coming to the UK, powered by Curve 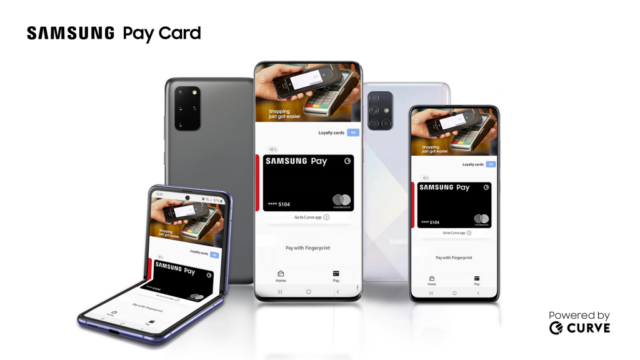 After launching the Samsung Money debit card in the US, the South Korean tech giant has announced that it is bringing Samsung Pay Card to customers in the UK. The company has tied up with Curve and MasterCard for the launch of Samsung Pay Card. Apart from offering a secure and simple way to pay, Samsung’s new card will also allow users to view all their spending in one place.

Samsung Pay Card offers the ability to sync multiple bank cards and loyalty cards in one place, offering users a true digital wallet experience. Since it is integrated with Samsung Pay, users can make all transactions through their compatible smartphone. Samsung has announced that it will launch Samsung Pay Card officially in the UK later this year.

Curve is one of Europe’s leading fintech firms, and it is re-bundling various financial products by letting users consolidate all their bank cards and loyalty cards in a single card. Samsung Pay’s partnership with Curve is the first of its kind. Once a user signs up for Samsung Pay Card and adds it to their Samsung Pay wallet, they’re reportedly directed towards Curve’s app, where they can use the full set of features.

Conor Pierce, Corporate VP of Samsung UK & Ireland, said, “We are delighted to announce this new partnership with Curve, coming together to provide a new payment solution for Samsung customers which will be available via Samsung Pay later this year.” In the US, Samsung had tied up with SoFi to launch its debit card.

Last year, Samsung had tied up with Curve to let users add their Curve card to the Samsung Pay app. This allowed users to make payments through Samsung Pay, no matter which bank account they use. Even if a user’s bank doesn’t support Samsung Pay, they could make payments via Samsung’s mobile payment solution, thanks to Curve.