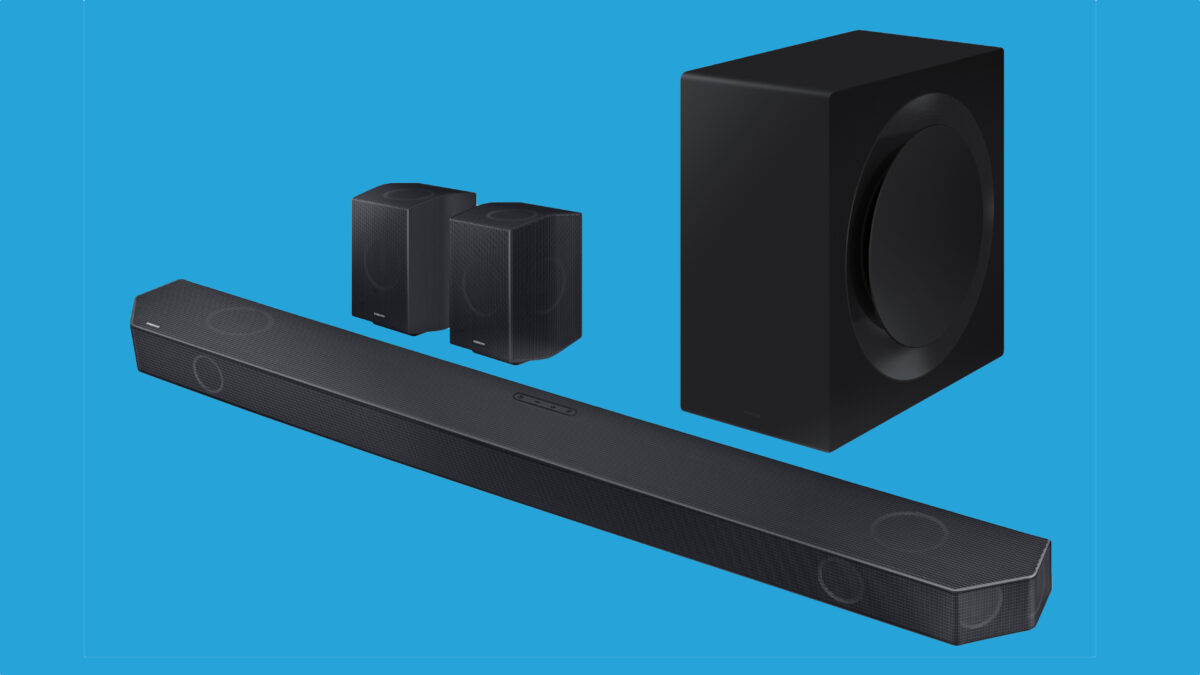 Although Samsung hasn’t revealed the complete specifications of these products, let’s look at all the information we have so far.

Starting with the HW-Q990C, it features 11.1.4-channel audio, similar to the last year’s model. But since this is a refreshed version, we expect it to have new and improved sound drivers for better audio quality. The soundbar itself has nine audio channels: three front-firing, four side-firing, and two top-firing. Then you get two more speakers with the soundbar, and they have two front-firing, two side-firing, and two top-firing channels for a total of 6 audio channels.

The soundbar comes with Q-Symphony 3.0, which, according to Samsung, should provide “vastly evolved sound for which the soundbar taps into the TV’s Neural Processing Unit to analyze audio signals and process each sound for more detail than ever before.” There’s also AI Sound Remastering onboard, which “utilizes AI to remaster each sound object to help ensure voices are clear, environmental sounds are enveloping and that each component is just the right volume.“

According to Samsung’s press release, one of the three new soundbars it announced today includes HW-Q800B. However, this model was released last year and is currently on sale in many countries. So, we are assuming that the press release has a typographical error. Most likely, the new model is called HW-Q800C (A for 2021, B for 2022, and C for 2023). Or maybe Samsung is calling it the HW-Q800B for 2023. For now, let’s just call it HW-Q800B.

The HW-Q800B carries over the same 3.1.2-channel audio setup from the last year’s model. It would have been amazing if Samsung had updated it to a 5.1.2-channel similar to other soundbars from the company, such as Q800B, for a better surround sound experience. According to Samsung, this ultra-slim soundbar is just 40mm tall and 38mm deep. Like the flagship model, the HW-Q800B comes with Q-Symphony 3.0 and AI Sound Remastering.

While Samsung has been offering soundbars for many years, at CES 2023, the company announced its first-ever gaming-focused soundbar, the HW-G60C. According to CNET, it is based on the HW-S60B soundbar that the company launched last year. Since the HW-G60C is focused on gaming, it has been designed to use with a PC, but it can also be used with TVs, thanks to HDMI/ARC, USB, and AirPlay 2 connectivity.

The soundbar has microphones with echo-canceling ability. Apparently, it helps in clear in-game chat and isolates the user’s voice for virtual voice assistant. Lastly, it comes with LED lighting because, of course, gamers need that. Currently, there’s no info about the audio channels on this soundbar. But considering that it is based on HW-S60B, expect it to feature a 5.0-channel audio setup and most likely miss out on the subwoofer.

Samsung hasn’t announced the prices of any soundbars that it revealed today. According to the company, the HW-Q990C will be available in Australia in Q1 2023, and the HW-Q800B is already on sale in the country. The available details of these models for other countries and that for the HW-G60C are still under wraps.