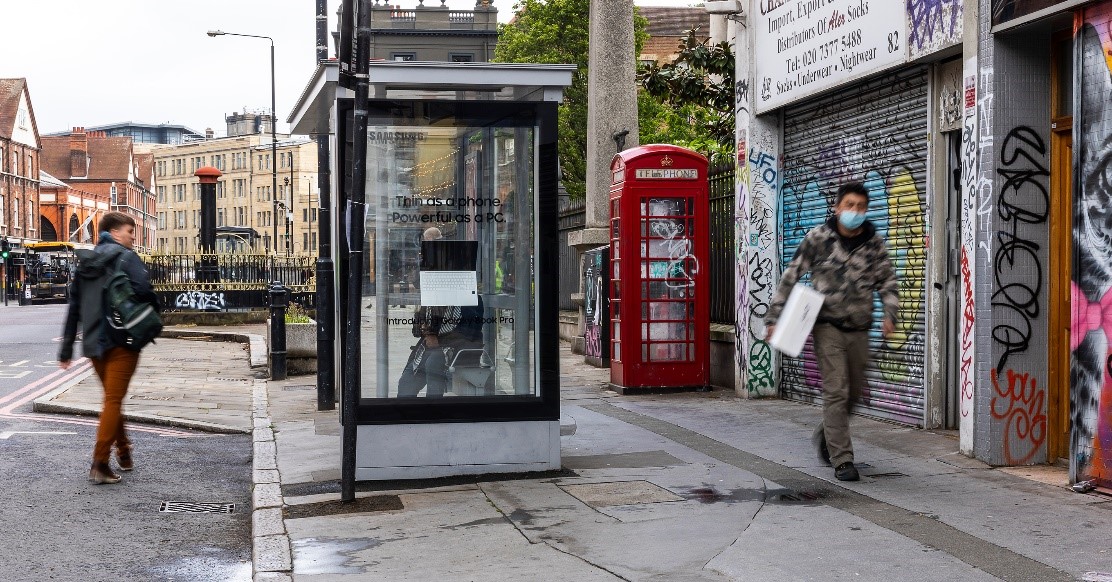 If you happened to have crossed Fashion Street by London’s Spitalfields Market earlier this week, you might have witnessed one of Samsung’s most unique out-of-home advertisements yet. Monday morning, using thin wire, Samsung suspended the Galaxy Book Pro between two sheets of glass at a bus station for everyone to see. And for anyone who didn’t know what they were looking at, the ad explained that it’s the Galaxy Book Pro. A laptop that’s ‘Thin as a phone’ and ‘Powerful as a PC.’

The idea was to showcase just how thin the new Galaxy Book lineup is. Samsung’s new Galaxy Book Pro — the model that was used for the ad — measures 8.5mm in thickness when fully open, and indeed, it looks very slim inside the glass enclosure that’s usually reserved for flat posters.

Technically speaking, Samsung, in partnership with Clear Channel Advertising, made a 3D poster using an actual Galaxy Book Pro in an attempt to ‘challenge perceptions’ and demonstrate that an advertising space can be a product showcase.

Samsung’s initiative was unique and creative, but sadly, the Galaxy Book Pro wasn’t kept behind glass for very long. This one-of-a-kind showcase, as Samsung describes it, was taken down at lunchtime on the same day it was put up. The thin Galaxy Book Pro was replaced by an even thinner poster, mere hours after it made it in the spotlight.

Samsung didn’t explain why this creative ad — which came in as a surprise, to begin with — was taken down so shortly, but the company hopes that it brought a smile to people’s faces.

And in a way, it feels like bringing the ad down this early defeated the original purpose of challenging perceptions and turning an advertising space into a product showcase.