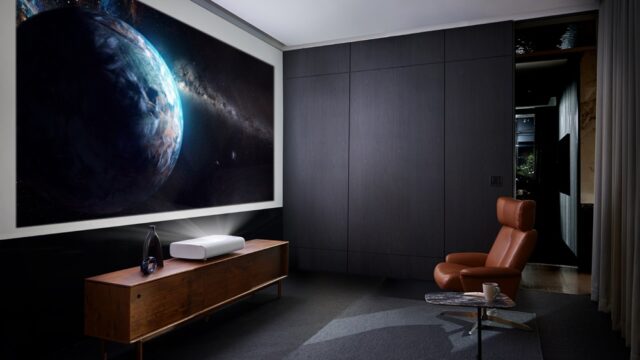 Samsung unveiled its high-end ‘The Premier’ projector about a year ago, and it hit shelves in the United States shortly after. It boasts of several high-end features, such as the ability to play 4K HDR10+ content, something that no other product on the market can do. Hence, it comes as no surprise that it ranked first in the ‘premium’ projector category in the United States

The information comes from a blog post on Samsung’s website, which states that Samsung has a 27.4% market share in the United States. It is miles ahead of the competition and represents a 44% growth over the last year, indicating that more people are buying up Samsung’s ultra-short-throw projectors, despite their prohibitively high prices, which start at $3,500.

Furthermore, ‘The Premier’ has also been a massive hit among film industry professionals who lauded it for its feature set. Then again, the ultra-short-throw projector market is relatively niche and consists of enthusiast-grade products, so the competition isn’t as tight compared to more affordable segments.

Sung Il-Kyung, the vice president of Samsung Electronics’ video display division says that the company has more projectors in the pipeline following The Premier’s success, but neglected to divulge any specifics.