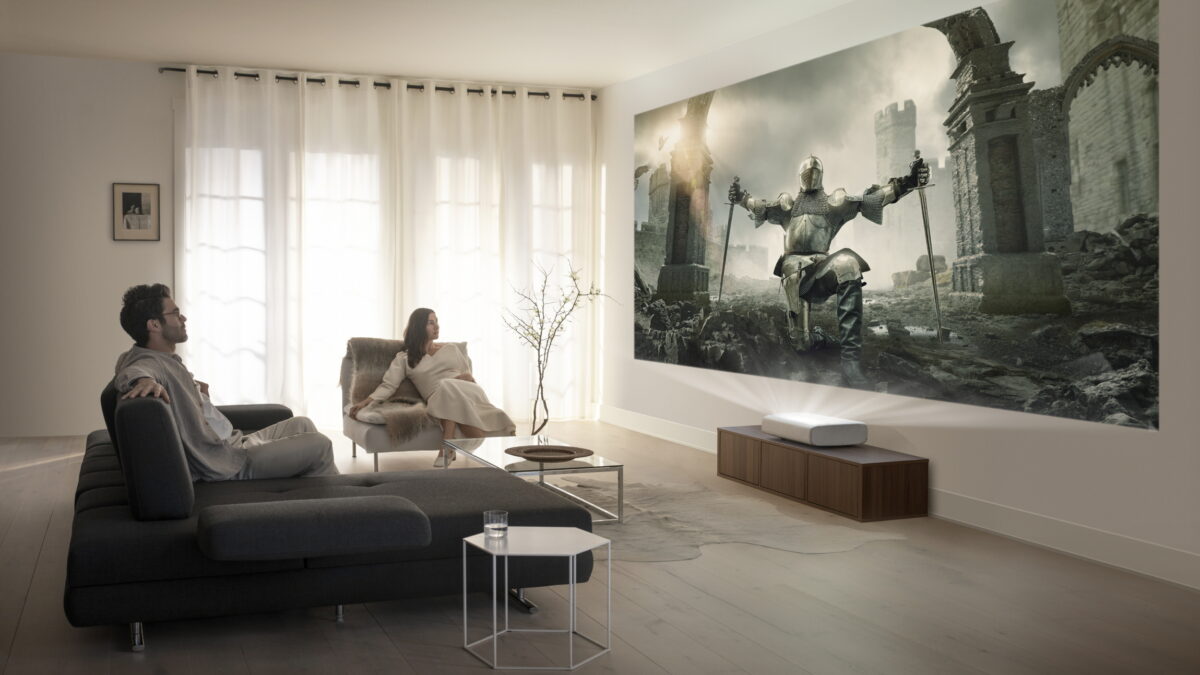 Samsung today launched The Premiere, a series of 4K Ultra Short Throw (UST) laser projectors and the world’s first such devices with HDR10+ certification. The series consists of the 130-inch LSP9T and the 120-inch LSP7T, both of which offer 4K resolution support, albeit only the former comes with HDR10+. What such a high-definition dynamic range means in the context of projectors is that you’re looking at one quite literally shining beacon of excellence that can deliver up to 2,800 ANSI lumens of brightness.

Further adding to the cinemaphile appeal is The Premiere’s Filmmaker Mode meant to enable a full-fledged home cinema experience. Samsung’s own Smart TV platform is part of the package, meaning you can install a wide range of video streaming and other apps to the newly introduced devices. Naturally, users will also be able to connect The Premiere to their smartphones and tablets.

Today’s launch marks another important milestone in Samsung’s efforts to drive HDR10+ adoption as projectors are a pretty tricky thing to optimize for premium viewing experiences, at least in the consumer electronics space. The lineup itself is part of Samsung’s Lifestyle portfolio whose main goal is delivering a high-end blend of form and function, which is something it’s been doing for over four years now.

Speaking of high-end, the series’ international prices are yet to be determined but we can confirm Dutch MSRPs which, by themselves, are a pretty good indicator of what to expect in Europe. The LSP9T has a suggested price of €6,499, whereas the LSP7T is intended to go for €3,499. For added context, that amounts to about $7,700 and $4,150, respectively. So far the only official word regarding availability is that The Premiere is scheduled to be released this fall in Europe, South Korea, and the United States. Other regions will follow by this year’s holiday season.

Samsung co-developed the open and royalty-free HDR10+ standard with Amazon in 2017. Since then, the standard has expanded its presence across various device categories, including smartphones, tablets, laptops, TVs, and gaming consoles. Now, the high dynamic range standard is expanding its presence even further with the addition of gaming and set-top boxes. In collaboration with […]

As we all know, Samsung doesn’t support the Dolby Vision format for HDR videos on its TVs. Instead, the company uses the HDR10+ format that it co-developed with Amazon and a few other brands. Last month, Apple added support for HDR10+ videos to Apple TV video streaming boxes with the tvOS 16 update. Now, the company is […]