Samsung today introduced the latest version of its Samsung Internet Beta app that brings a couple of changes including Protected Browsing which aims to keep you safe online. Samsung Internet Beta version 7.2 gets an upgraded engine as well as new user interface features and improved performance on devices with low memory.

Samsung has upgraded the beta version’s engine to Chromium M59 which brings improved Web Platform features such as Intersection Observer, WebGL2 and Web Assembly. They will go a long way in improving graphics in online games and speeding up websites. 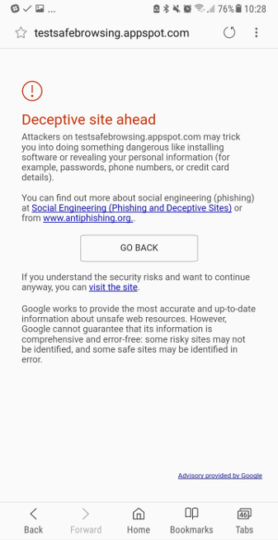 One of the main features included in the new Samsung Internet Beta is Protected Browsing. This feature is going to prevent users from going to websites that might be using deceptive methods to steal their information or to install malware on their device. The feature will display a warning message when a user is about to be directed to such a site.

It knows when to display the warning message as the Protected Browsing feature works by checking a hash of the URL with a database of websites that are known to be dangerous. If the feature detects an unsafe website it will suggest the user go back to the previous page but if they think that there has been a mistake, they can just tap on “visit the site” to go ahead and visit it anyway. 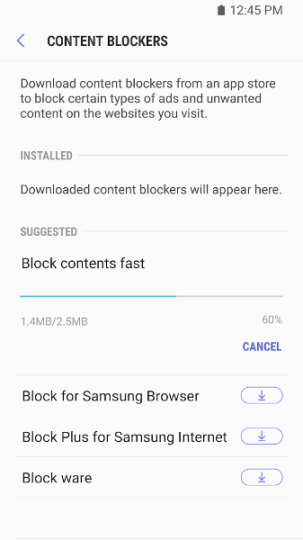 Additional privacy-focused updates include content blocker improvements. Users can install content blockers directly within the new Samsung Internet Beta. However, since this one-tap feature uses the Samsung Galaxy Apps store, it’s only available on Samsung smartphones and tablets. The Samsung Internet Browser has been available for non-Samsung devices since last year. On non-Samsung devices, the browser will provide a direct link to the Google Play Store from where the content blocker can be installed.

Some user interface improvements have been made in the latest version of Samsung Internet Beta as well. The URL bar has been revamped to free up more space for website-specific ambient badges. When the browser detects a web app it will automatically show the “Add to homescreen” button which will let users instantly install the Web App with one tap. The “Reader mode” badge will be displayed on news articles to reformat the article for easy reading.

The new Samsung Internet Beta is now available for download from the Google Play Store and our APK page.