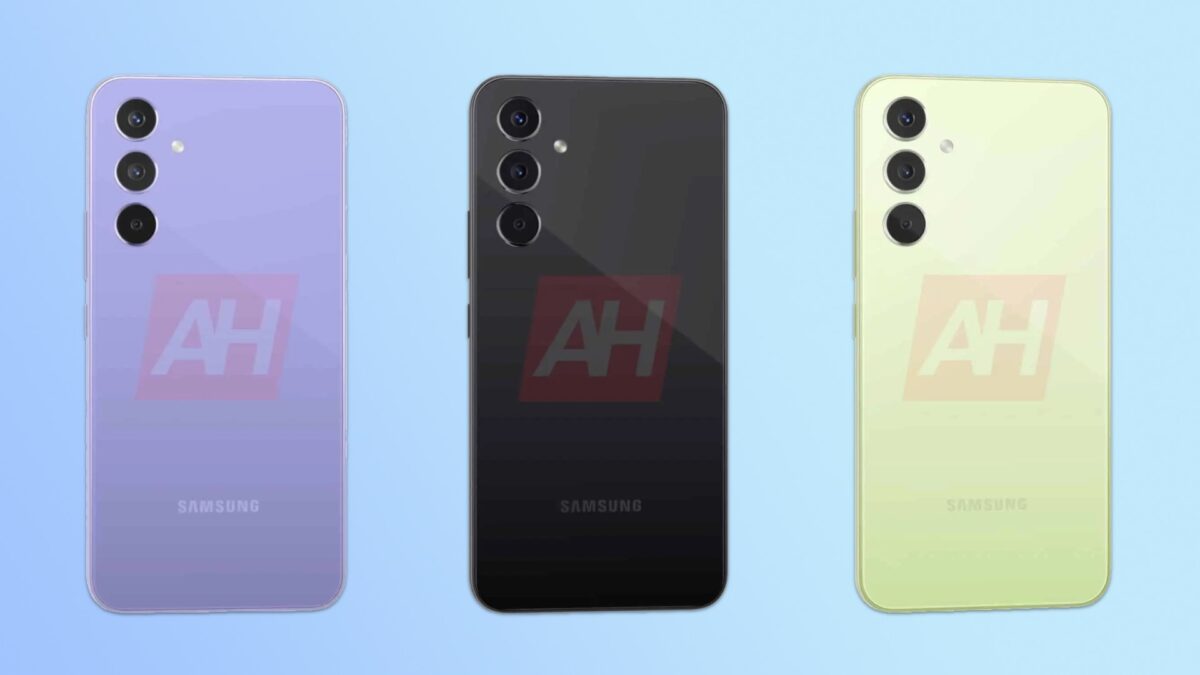 Multiple upcoming Samsung devices have leaked today. A few hours ago, the Galaxy A34 images were revealed, and then the Galaxy Book 3 series leaked in the first set of press renders. Now, the official photos of the Galaxy A54 have leaked, revealing the design of the premium mid-range smartphone in four colors.

AndroidHeadlines leaked the images of the Galaxy A54. The smartphone is expected to go official in Q1 2023 alongside the Galaxy A14, Galaxy A24, and Galaxy A34. Samsung will not launch the Galaxy A74 this year. The Galaxy A54 will launch in at least four color variants: Black, Lime, Purple, and White.

Galaxy A54 has a Galaxy S23-like design

Galaxy A54 has a straightforward design, similar to the Galaxy S23 and the Galaxy S23+. It has separate camera rings for all rear cameras and a flat display with curved corners. Samsung is removing depth cameras from its 2023 smartphones, so the Galaxy A54 will have three rear cameras. The selfie camera is embedded into the display’s punch-hole-shaped cutout.

Previous reports indicate that the Galaxy A54 has a 6.5-inch Full HD+ Super AMOLED display with a 120Hz refresh rate and stereo speakers. It will be powered by the Exynos 1380 chipset, featuring four high-performance cores and the Mali-G68 GPU. It is powered by a 5,100mAh battery. It could come with Android 13 onboard and get four major Android OS updates.

The phone is expected to feature a 32MP selfie camera on the front. On the rear, it might have a 50MP primary camera with OIS, a 12MP ultrawide camera, and a 5MP macro camera. Other features of the phone could include an IP67 rating for dust and water resistance, 5G, Wi-Fi 6, GPS, Bluetooth 5.3, NFC, and a USB Type-C port.

Leaks showing us renders of some of Samsung’s 2023 phones have revealed that the company might be going for a more consistent design across its mid-range and flagship smartphones. The back is where the similarities are expected to be most noticeable. The flagship Galaxy S23 series and mid-rangers like the Galaxy A54 and the Galaxy […]