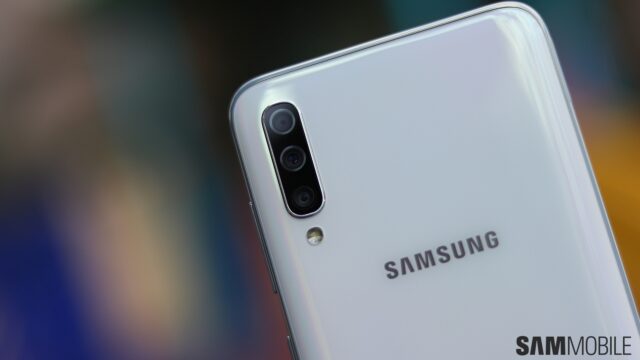 The latest Galaxy A70 software update introduces the Super steady camera feature to the mid-range device. Out of all the 2019 Galaxy A series phones, the Galaxy A70 was the most feature-packed and high-end option until the Galaxy A80 came along, with specs like super fast (25W) charging and a triple-rear camera setup with a 32MP primary sensor.

The A70’s camera came equipped with features like Super Slow-mo video recording and AR Emoji, which were first introduced on Samsung’s flagship phones, and the Super steady feature is yet another flagship camera feature that has arrived on the A70.

Introduced on the Galaxy S10, Super steady is a software-based stabilization feature for when you’re recording videos and uses the ultra-wide rear camera to shoot videos when enabled. It’s unclear exactly how it works, but you do get considerably smoother videos with less shake, although you also need brighter lighting as the ultra-wide camera has a lower aperture than the primary camera.

It’s also worth noting that Super steady videos don’t give you the full 123-degree field of view of the ultra-wide camera and the maximum recording resolution is limited to Full HD at 30 frames per second. Super steady can be enabled by tapping the icon that shows a vibrating hand (see here) on the top of the camera app.

Latest security patch not included in the update

The update that includes Super steady was released last week and also improves touch screen performance and camera stability in general. It doesn’t, however, get you the latest security patch, or even the patch from last month (yes, it has the May security patch, which is what the phone launched with in most markets).

The update is available in the Netherlands and a few other European countries and can be downloaded over the air from the phone’s Settings » Software update menu using the Download and install option. It comes with software version A705FNXXU2ASF5 and is also available in our firmware database.

Via FirmwarePhone Galaxy A70 Load 13 comments