Samsung is rolling out a second software update of the month for the Galaxy A70 in India. The new update brings a Night mode for the camera and also adds the July 2019 security patch. The previous update added the Super steady camera feature to the device but came with the May security patch.

Galaxy A70 gets better at low-light photography

The Galaxy A70 is arguably the best 2019 Galaxy A phone right now. The Galaxy A80 may have a faster processor, a no-notch screen, and a cool camera system, yet it leaves a lot to be desired. The A70, meanwhile, is only getting better. As we pointed out in our review, it is a powerhouse of a phone with just a few limitations, like its low-light photography skills. Samsung is now addressing that limitation by adding the Night mode feature with the latest software update.

The update, which is now available over the air in India, also adds the QR scanner to the Galaxy A70’s camera. Complete with the July 2019 security patch, the update weighs in at 367 MB and comes with the firmware version A705GMDDU3ASG6. It should make its way to other countries soon.

To upgrade your Galaxy A70 to the latest firmware, head over to the phone’s Settings » Software update menu and hit the Download and install option. You might want to try this a couple of times if the update doesn’t immediately show up, or wait a day or two. Alternatively, you can download the firmware for the latest update from our database and manually upgrade the device using a Windows PC. 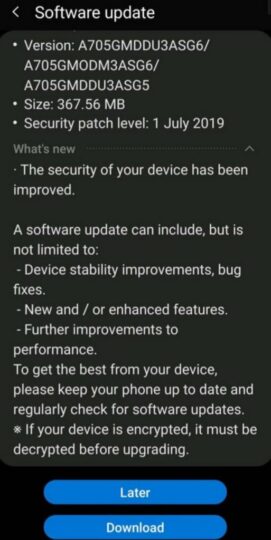