The first of Samsung’s 2020 Galaxy A series phones may be around the corner. The Galaxy A51 had popped up in an online benchmark a couple of weeks ago, and earlier this month, what was supposedly an image of the phone’s internals revealed a cutout that would hold a new L-shaped quad camera setup. Now, we can see what that camera setup — and the phone itself — could look like thanks to leaked renders of the Galaxy A51 that are said to be based on the final design.

If these renders are accurate, then the Galaxy A51 could be the first Galaxy phone after the Galaxy Note 10 to have a centered punch-hole display. Until now, we’ve only seen Samsung use waterdrop notches for its mid-range and budget phones, with some exceptions like the Galaxy A60 and Galaxy A8s that have the front camera cutout placed in the top-left corner of the display, similar to the Galaxy S10. 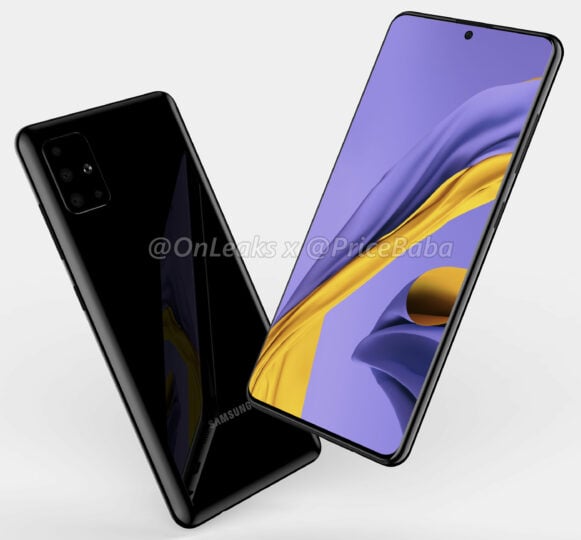 The A51 also seems to have smaller bezels at the top and bottom, which could actually be true as the A51’s dimensions are reportedly not any bigger than the A50/A50s despite it having a display that’s 0.1 inches larger (6.5 inches). As for the quad camera setup at the back, the way the sensors are placed on the A51 should address complaints that some folks have had about Samsung’s new phones looking too much like iPhones from the back. Rumor has it that the A51’s 48MP primary rear shooter will be accompanied by a 12MP ultra-wide camera, a 12MP telephoto camera with 2x optical zoom, and a 5MP depth-sensing camera. The ultra-wide camera has not been seen at that resolution on mid-range Galaxies before, nor are quad camera setups common on non-flagship Galaxy phones. The Galaxy A9 (2018) is the only existing device to have one.

The rest of the Galaxy A51’s design seems to be unchanged from the Galaxy A50/A50s. The power and volume buttons are on the right side, the headphone jack, USB Type-C port, and loudspeaker are placed at the bottom, and the SIM and microSD slot is on the left side. Even most of the specs are expected to be unchanged. The A51 should feature an Exynos 9611 octa-core chipset, 4/6GB of RAM, 64/128GB of storage, a 32MP front camera, a 4,000 mAh battery with 15W fast charging.

At this time, it’s unclear exactly when Samsung plans to make the Galaxy A51 official. The announcement may not be far off now, as production of the device reportedly began in late October in India. We’ll let you know once more information about the A51’s release becomes available.