After rolling out the Expert RAW application for the Galaxy S21 Ultra back in November 2021, Samsung is planning to bring the app to more of its devices.

If you have missed the bus, Samsung’s Expert RAW app gives granular controls to users over the camera on their Samsung devices. Well, this feature is only available on the Galaxy S22 Ultra and the Galaxy S21 Ultra, as of now.

Only high-end flagship models to get the Expert RAW app

According to a post on Samsung’s official forums in South Korea, the Expert RAW app will be made available to more Galaxy devices starting February 25. That’s also when the app will move from beta to a stable version.

This would excite photography lovers, as they can now tweak the camera settings as per their requirements and capture the best shots possible. The forum post did not mention anything specific about which Samsung phones will get this Expert RAW application but it was clarified that only high-end flagship models will receive it.

So, taking a cue from this, it might be released only for premium phones such as the Galaxy Z Fold 3, Flip 3, Galaxy S20 Ultra, and the Galaxy Note 20 Ultra. The company may also look at other flagship devices from the last two years and evaluate if they can support the Expert RAW app or not. This is not the final list, and we are still waiting for the official list.

There are also low chances for the Galaxy A series phones to pick up the Expert RAW app. Not even the Galaxy A72. Samsung has promised to announce the list of supported devices by February 25. So stay tuned for that. 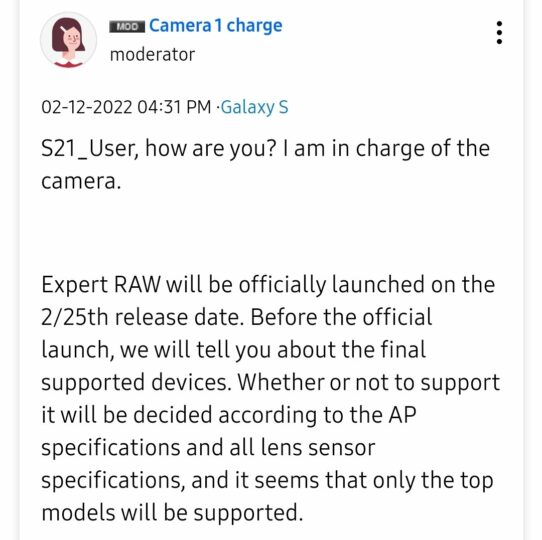 It’s been a few months since Samsung released the Expert RAW app. It’s an official app from the co …

All the Galaxy S22 camera features coming to you with One UI 4.1!

Last year, Samsung had released the Expert RAW camera app for the Galaxy S21 Ultra. Since then, users have req …

Samsung had released the Expert RAW camera app for the Galaxy S21 Ultra two months ago. The app had a few issu …

Last month, Samsung had the ingenious idea of partnering with Discovery to demonstrate the Galaxy S21 Ultra …