The global smartphone market grew 20% year-on-year in the first quarter of 2021, and Samsung was able to regain the top spot from Apple after losing it in Q4 2020. These results were helped by poor iPhone shipments in North America and Europe, reveals a new infographic by market research firm Counterpoint Research.

Samsung is leading its rivals in Europe, LATAM, MEA

Apple led the market in North America despite it losing ground. It captured 55% of the market and was followed by Samsung with 28% market share.

Apple and Samsung were on equal footing in Asia, where they each have a market share of 12% and fall behind Xiaomi, Oppo, and Vivo.

However, Samsung led its rivals in Europe, LATAM, and MEA. The company captured 37% of the European smartphone market in terms of Q1 shipments, while Apple and Xiaomi had 24% and 19% market share, respectively. 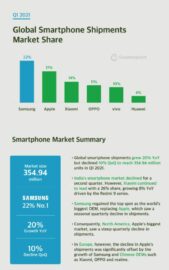 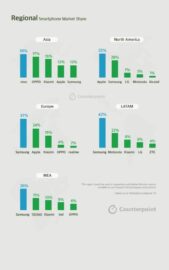 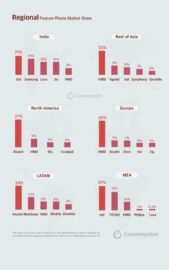