We exclusively reported not too long ago that Samsung has a new Galaxy M series in the pipeline. It’s believed that this series will replace the Galaxy J, On and C handsets to consolidate Samsung’s affordable offerings. Samsung is yet to confirm the new series but it appears that the launch may not be that far off now.

The Galaxy M10 and M20 will likely be the first two handsets in this series. The former was recently spotted on Geekbench as well which provided a glimpse of its specs. It has now received its Wi-Fi certification.

Galaxy M series launch possible in the near future

These certifications are normally viewed as an indication of an impending launch. It’s possible that Samsung may be planning to launch the new Galaxy M series in the near future. Some reports even predict a January launch for the Galaxy M10 and M20.

The Galaxy M10 (SM-M105F) benchmark revealed an Exynos 7870 processor with 3GB of RAM. It’s the same chip that Samsung uses in most of its budget devices. The device may also come with up to 32GB of storage and Android 8.1 Oreo. That possibility is reiterated in the Wi-Fi certification as well. Since it’s a budget smartphone, it could feature an LCD display.

Our sources have also revealed to us that the Galaxy M lineup will initially be released in countries across the Middle East, Asia and Africa. Samsung will be focusing on price sensitive markets initially which would make sense given what it wants to achieve with the new Galaxy M series.

There’s no official word as yet from Samsung about the Galaxy M10 or M20. It may be a few weeks before the company reveals something about them officially. It goes without saying that these entry-level devices will be affordably priced when they’re launched. 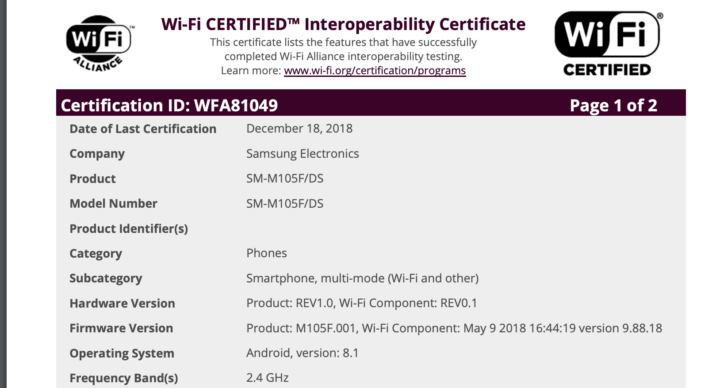