Video calls require a lot of bandwidth to offer a smooth and jitter-free experience to the two parties involved, even in this day and age where LTE connectivity has become quite widespread. Even if the internet speed on one end of the call becomes unstable, the person at the other end has to suffer the consequences, which can range from low-quality video to the video stream pausing completely. Samsung seems to have foreseen back in 2013 that bandwidth issues with video chatting may never go away, according to a patent the company was granted by the U.S. Patent and Trademark Office (USPTO) earlier this month.

What’s the patent about? Well, since Samsung applied for the patent almost five years ago, the company most likely didn’t have anything like AR Emoji in mind. The patent does, however, talk about a system that would allow users to video chat with each other using a “3D mesh model” of their face. This 3D model would then be transferred to the other device, but instead of regular video where each frame is a completely different image that needs to be transmitted, the 3D model would simply react to the user’s facial expressions and only these changes in expressions would be transmitted. That, according to Samsung, requires less bandwidth as only particular aspects of the face’s 3D model (the changes in expressions, mostly) would have to be sent over the internet instead of an actual image of the user, as is the case in video calling right now. 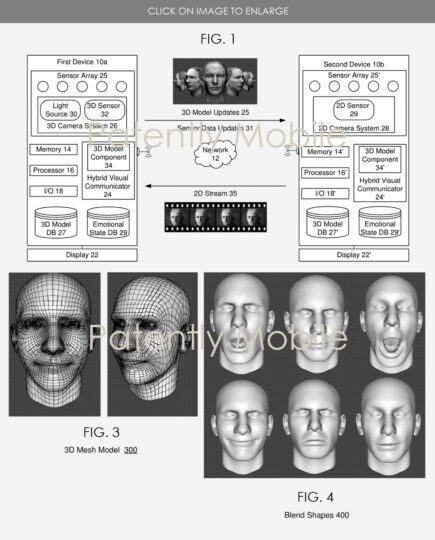 In simpler terms, such video calls would transmit a computerized likeness of the users, and while that means you won’t actually see your friends and loved ones as you would in a regular video call, internet bandwidth and speed will be less of a limiting factor. And, well, a computerized likeness is exactly what AR Emoji creates, and while in its current form it’s not too great, things would change with a 3D camera, something that is reportedly a part of the Galaxy S10. The second device wouldn’t have to be a Galaxy S10 with a 3D camera for this to work as any device could display the 3D model, though it would mean that one of the parties involved would have to transmit regular video.

Now, it may be just a coincidence that Samsung’s patent was granted a few months ahead of the Galaxy S10’s launch, but it certainly suggests that AR Emoji is only a starting point for what could be a fun and faster way of interacting with people through a smartphone. Or the system described in this patent could just turn out to be one of many that never see the light of day as a finished product, but the idea is neat and one that Samsung may be seriously exploring at the moment.

Head to the source link for more details on the patent.