Intel has been the world’s top chipmaker since 1993 when it came out with its Pentium processors. However, Samsung has been catching up fast recently due to rising prices and demand for memory chips.

“If memory market prices continue to hold or increase through the second quarter and the balance of this year, Samsung could charge into the top spot and displace Intel, which has held the No. 1 ranking since 1993,” predict Bill McClean, president of the market research firm IC Insights.

Intel is expected to post chip sales of $14.4 billion in the second quarter of this year while Samsung’s chip sales are expected to account for $14.6 billion in revenue and registering a 4.1 percent year-over-year growth.

If this does end up happening, it would be a big achievement for Samsung as it will become the only competing chipmaker to dethrone Intel from its position of dominance. 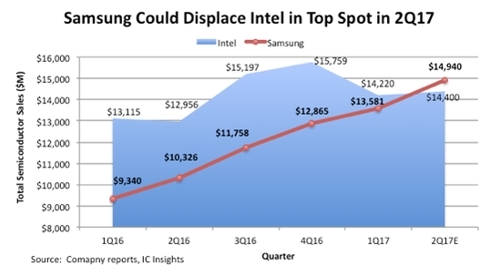 After ten years of working with Intel, supercomputer expert Robert Wisniewski has joined Samsung Electronics A …

Samsung beats Intel in semiconductor sales with massive growth in 2021

Samsung’s mobile division held on to its crown as the company with the most smartphones shipped in 2021. …