Samsung has been pushing towards a wire-free future. The company has been integrating more and more wireless technologies in its products. Wireless charging, NFC and MST payments, Wi-Fi speakers, you name it. The company recently unveiled its first pair of completely wireless headphones, the Gear IconX. It’s not the first in the world to offer a product in this category, but the expectations have been quite high due to the company’s reputation among consumers.

After Bragi introduced its Dash wireless headphones, big brands like Apple, Motorola, and Samsung jumped in. As opposed to offerings from Apple and Motorola, the Gear IconX earphones take a slightly different route. Samsung is leaning more towards fitness enthusiasts with the IconX. Apart from streaming audio completely wirelessly, they can also track physical activity and fitness, thanks to built-in sensors. Moreover, they can also store music so that you can leave your smartphone at your home while working out.

Due to the added features, the Gear IconX cost slightly higher than the Apple Earpods and the Motorola Verve Ones at $199.99, and Samsung India sent us a review unit a couple of weeks ago. Let’s see how good Samsung’s first completely wireless earphones are in terms of audio quality and fitness tracking.

The package comes with a pair of Gear IconX earbuds, three sizes of ear tips and wingtips each, the charging case, a microUSB cable, and a microUSB to USB adapter. You need to place the earbuds in the case to charge them. The earphones are compatible with smartphones running Android 4.4 (or above) and at least 1.5GB RAM. You need to install Samsung’s Gear app, which in turn will install the Gear IconX Plugin app. You can then start setting up the IconX earphones.

The app is fairly easy and intuitive to use. You can use the app to see device status, battery level, adjust volume, transfer music, adjust notification settings, and to activate or deactivate the Ambient Sound mode. Once the earphones are set up, you can just wear them and they will power on automatically and connect to each other. You can either use the smartphone or desktop app to transfer music files to the earbuds (there is 3.5GB of internal storage) or stream music from the connected phone.

If you plan to use them for fitness tracking (of course you do), you also need to install the S Health app. All the activity-related data would be visible in the S Health app. Samsung claims that the Gear IconX can be used with third-party fitness apps like Strava and Map My Run which support BLE heart rate profile.

A firmware update arrived for the Gear IconX two days after I received the review unit, and I had to use the desktop app for macOS to update the firmware. It’s strange that you need a desktop app even though Samsung could’ve achieved that using the smartphone app. The IconX work with iOS devices, but you can use them only to listen to music since the S Health and Samsung Gear apps haven’t been released for iOS yet. 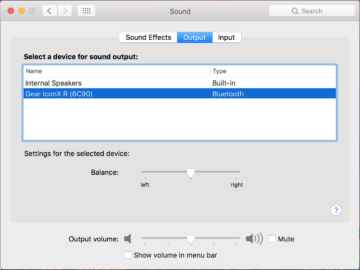 The Gear IconX are offered in black, blue, and white. Samsung’s design team has been killing it lately. The Galaxy S7 duo and the Galaxy Note 7 are three of the sexiest smartphones in the market right now, and the Gear IconX are no exception. They look futuristic and feel solidly built even though Samsung decided to used a plastic material for the IconX. There are three LED indicators on the case to indicate the charging status of each of the earbuds and the case. They’re orange while charging and green when the battery is fully charged.

The earbuds are not too big, and fit comfortably in most ears. However, you would need to make sure that you try every pair of eartips and wings (three pairs are provided in the box) to make sure which ones fit your ears best. Otherwise, they’ll not fit snugly, and that will turn out to be a problem while working out. Once you’ve found the perfectly fitting pair of eartips and wings, you’ll love how well the IconX feel in your ears.

There’s a flat touch sensitive area on each of these earbuds which can be used to control music playback, volume, and to start activity logging. One taps plays or pauses the music, two quick consecutive taps skip the track, and three quick consecutive taps will play the previous track. You can also swipe the touchpad up or down to increase or decrease the volume. Holding the touchpad for three seconds will begin or finish a workout.

I found the touchpad placement to be iffy. Since the touch area is almost as wide as the outer side of the earbuds, it is easy to accidentally touch the touchpad while working out, skipping or pausing the music. Also, you’ll need to get accustomed to the pressure that you have to apply for all those music touch gestures and taps.

You can designate which earbud is the primary one since that will be used to take calls. I compared the audio quality of the IconX with my Jaybird X2. The volume was more than enough, but the IconX sounded quite average in comparison. The soundstage isn’t as wide as some of the good Bluetooth earphones out there, and I could notice bass cut off and slightly crackling sound at the highest volume level. Moreover, taking calls wasn’t a great experience either. The voice of the caller comes only through the primary earbud, and the quality is strictly average. The audio quality of the IconX could have definitely been better. 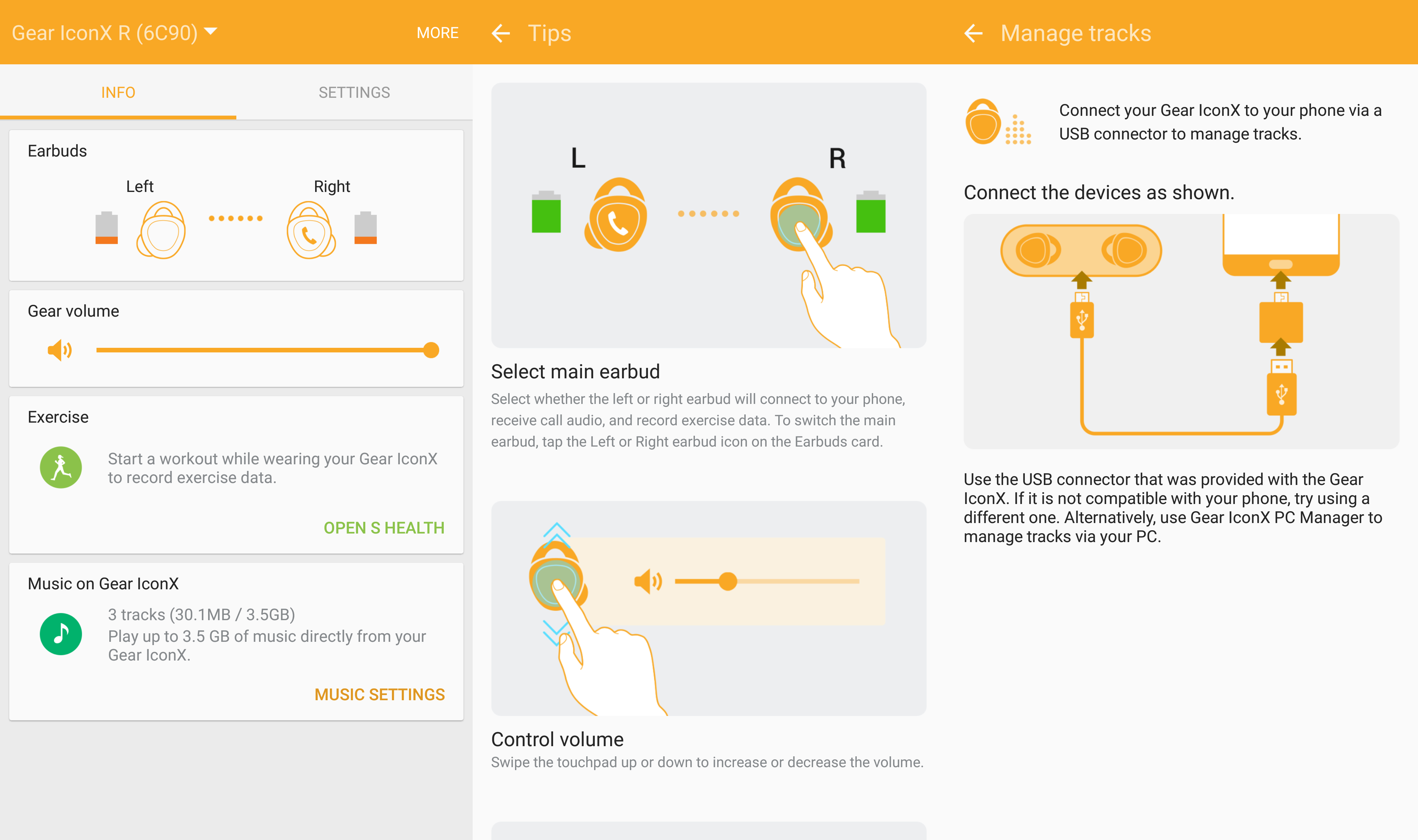 Most consumers won’t notice these shortcomings, but audiophiles would definitely be able to point them out. Granted, these earphones offer more features than the Jaybird X2 with a smaller footprint, but it doesn’t mean you have to sacrifice audio quality. Audio quality should be the focus of every hearable device. Coming to the wireless range of the IconX, I didn’t face any problem listening to music when my smartphone was lying around 30 feet away from me. As long as you’re in the same room as your smartphone, you won’t have any problem.

The Ambient Sound mode is a well thought out feature. It amplifies and relays outside sound so that you are aware of your surroundings. It is extremely useful in those situations when you want to listen to music but also want to know if anyone is trying to have a conversation with you. They are also useful for being aware of vehicles passing by when you’re taking a run. However, the ambient audio sounds quite artificial and tinny, and you could sense a bit of delay. While talking to my brother with the ambient mode activated and the music being played, it felt as if watching a movie with lip sync issues.

The best thing about the IconX is that it doubles up as a fitness and activity tracking device even when you don’t have your smartphone handy. Touch and hold the touchpad of the Icon X for three seconds, and you’re good to go. A female voice gently notifies you that the exercise mode has been activated. You can stop the workout using the same gesture. You can receive audio guides at selected intervals during workouts.

I used the S Health app to track fitness during the course of the review. The IconX does a decent job of tracking heart rate using the built-in heart rate monitor. However, it is only slightly more accurate than the Gear Fit 2 that I reviewed a few weeks back. You need to understand that these earphones use an optical heart rate monitor, so they will never be as accurate as some dedicated chest strap heart rate monitors available in the market.

You can see neat graphs of information such as distance, heart rate, calories burnt, and other metrics in the S Health app. If you have your smartphone in your pocket, the S Health app can also show your location and trail of your runs or cycle rides. Since the IconX lacks GPS or an altimeter, metrics such as distance and elevation will be far off from reality when not connected to a smartphone.

Samsung mentions that these earphones are splash and sweat proof, but you should remember that they’re not water-resistant, so you can’t take them for a swim.

Samsung has packed the Gear IconX with a 47mAh battery in each of its earbuds. They can be charged by being placed inside the charging case. The charging case also comes with a built-in battery with enough capacity to charge the IconX once. In our testing, the Gear IconX never lasted more than 1.5 hours when streaming music through Bluetooth at 80 percent volume and activity tracking. If you switch to offline music playback, you’ll be able to eke out more battery life. If you decide to turn off activity tracking, you can get up to 3-4 hours of music playback depending on the volume level. It takes a little more than an hour to charge the IconX.

If you’re a fitness enthusiast, you would want to track your activities and workouts throughout the day. Unfortunately, you can’t do that with the IconX, and you would be better off with something like the Gear Fit 2, which we reviewed recently. Apart from the battery life being extremely short, we found that the primary earbud almost always ate through battery faster than the secondary earbud. Also, the charging case didn’t charge the earbuds fully. Moreover, the case loses its charge when left for a few hours, which makes it even harder to achieve an extra charge for the earbuds.

The Gear IconX offers us a glimpse of a future where everything is wire-free. The earbuds fit quite well, but they aren’t the most nice sounding earphones, nor do they offer a way to track fitness and workouts all day long. It offers two big features but fails at being stellar in any of those. Extremely short battery life doesn’t help its cause either. The Gear IconX is a great product on paper or as a prototype, but it’s not ready for prime time yet. We advise you to buy the IconX only if you want to listen to music while working out but don’t want to carry more than one device at a time. Otherwise, you would be better off using the Gear Fit 2 paired to Bluetooth earphones/headphones of your choice.