Samsung has developed a new Power Saving Mode for its latest flagship smartphone, the Galaxy Note 7, which enables users to adjust the resolution of their display in order to preserve battery life. The South Korean firm claims that this new technology, when used in the right circumstances, can generate around 35 hours more juice from a full charge. It’s worth noting, however, that in order to achieve this number, you will also have to limit the maximum screen brightness, restrict device performance and prevent background network usage, but that’s a small price to pay for an extra day’s worth of battery.

Power Saving Mode is now organized into three tiers — Off, Mid, and Max. As the name suggests, when the handset is operating in Off Mode, the system is not mediating the amount of power that’s used to carry out standard tasks. When you turn the dial up to Mid, you’ll notice the resolution drop down from Quad HD to FHD 1080p. Performance is also dialed down, which means that multitasking and other intensive tasks won’t work as well as they did before. Activating the Max setting scales down the resolution to HD (720p), shuts off all network usage and disables animations. CPU speed is also reduced to a minimum.

What’s neat about the new Power Saving Mode is that it’s extremely flexible. What I mean by this, is that users have the facility to create their own preset. So, for example, if they select Max Power Saving Mode, but don’t want to sacrifice background network usage, they can choose to keep it enabled. This will, of course, affect the amount of battery life that the service is able to preserve. However, operating on an HD 720p display resolution with a lower CPU speed should still cut down power consumption by around 50%. 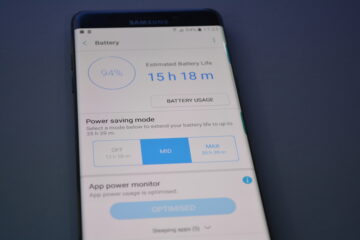 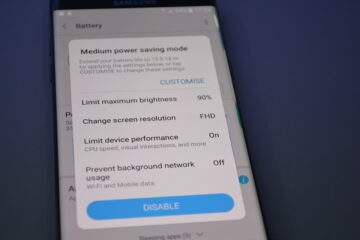 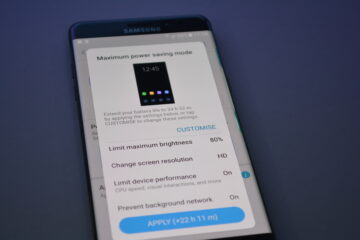 Unfortunately, it’s too early to tell how reliable this new feature is, but stay tuned for our full review of the Galaxy Note 7 later this month where we’ll be discussing it in even greater detail. In the meantime, be sure to check out our hands-on coverage to get a feel for the device.