We recently reported that Samsung is working on a brand new Exynos processor for its mid-range devices and now there’s some more information on the matter. A report out of Korea reiterates what we’ve already said, that the Exynos 7880 is a brand new processor which will be used for Galaxy smartphones next year. It’s most likely going to be used in premium mid-range smartphones such as the Galaxy A series. The 64-bit chip has 1.8GHz ARMv8A Cortex-A72 + 1.3GHz ARMv8 Cortex-A52 in big.LITTLE configuration coupled with an ARM Mali-T860MP4 GPU.

As per the report Samsung also has the Exynos 7650 in the pipeline, based on the 28nm process it’s a 64-bit chip with 1.7GHz ARMv8A Cortex A-72 + 1.3GHz ARMv8 Cortex-A53 in a big.LITTLE configuration and an ARM Mali-T860MP3 GPU. It’s expected that Samsung will use both processors for 2016 Galaxy smartphones, most likely the ones that are targeted towards the mid-range segment of the market. 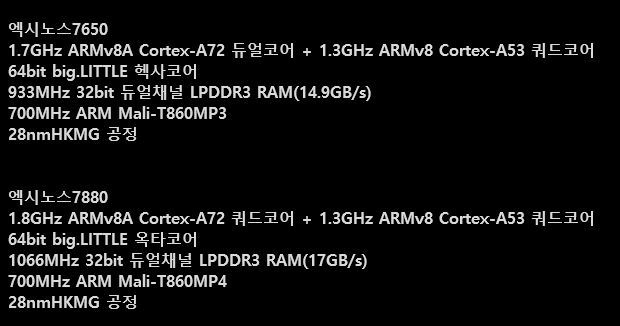 Three months ago, we exclusively reported about Samsung’s 2017 iterations of the Galaxy A lineup: the G …

Samsung has been in the smartphone SoC business since the Galaxy S days, rivalling the likes of Qualcomm, Inte …

The Exynos 7420 is shaping up to a monster of a mobile chipset, but if a LinkedIn profile discovered by PhoneA …