SamMobile’s experience with the Galaxy Note 4 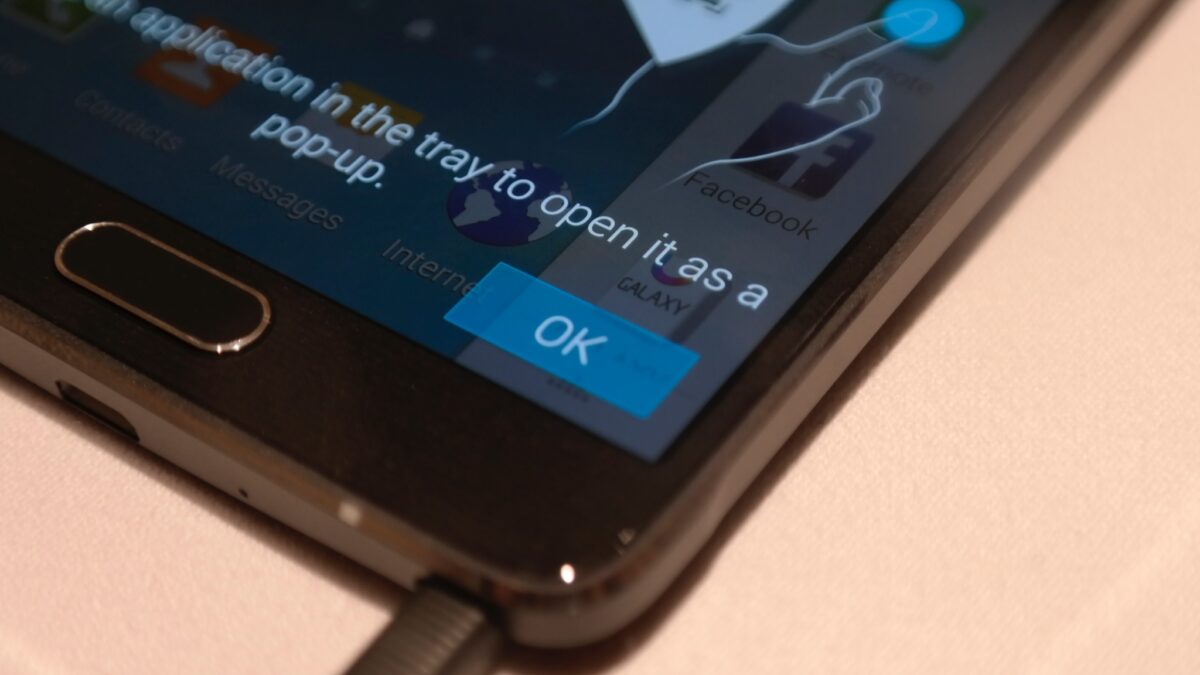 At its UNPACKED 2014 Episode 2 event, Samsung has just announced the Galaxy Note 4. The fourth generation Galaxy Note device looks even better and features a gorgeous display. Samsung gave SamMobile the opportunity to test their new devices just before the event. You can read our hands-on with it below:

The two things which we noticed immediately, when we got our hands on with Samsung’s latest Note device, were its gorgeous looking design and its stunning 5.7-inch QHD (2560×1440) Super AMOLED display. 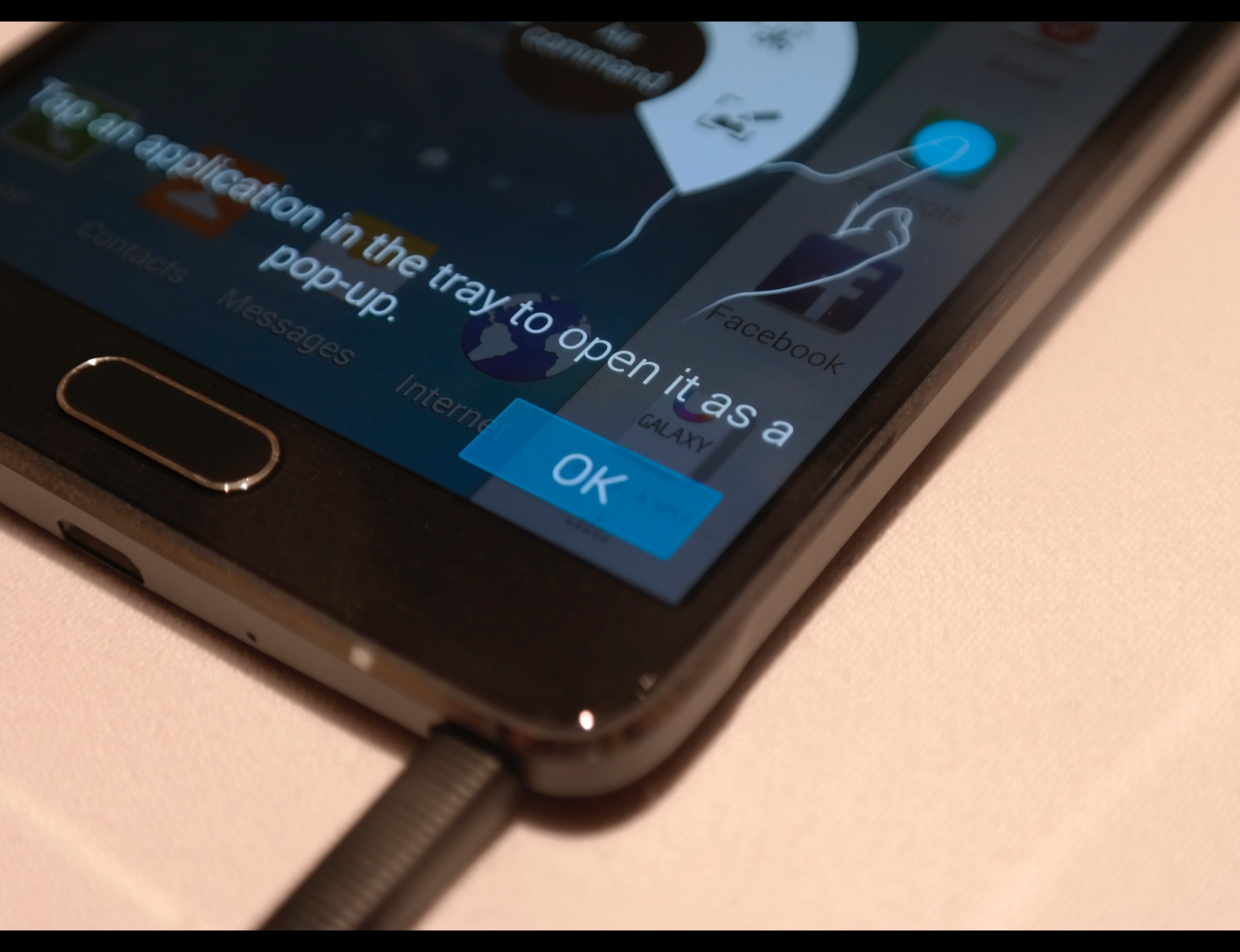 In terms of design, the Note 4 has a 2.5D glass screen, inherited from the Galaxy S3, which offers extra protection while perfectly complementing the device’s rich viewing experience. This glass screen looks like it’s actually located on top of the device’s display and has nice edges making it a pleasure to feel with your fingers.
It features metal design sides, like the Galaxy Alpha. It has the signature back from the Note 3, but the texture is a bit more refined. It provides incredible comfort that makes it easier to control with one hand. The device not only looks beautiful, but also offers a superior grip and enhanced durability. Also, it doesn’t feature the Note 3’s large data/charging USB3.0 port, but the regular micro USB 2.0 port again, though with Qualcomm’s Quick Charge 2.0. 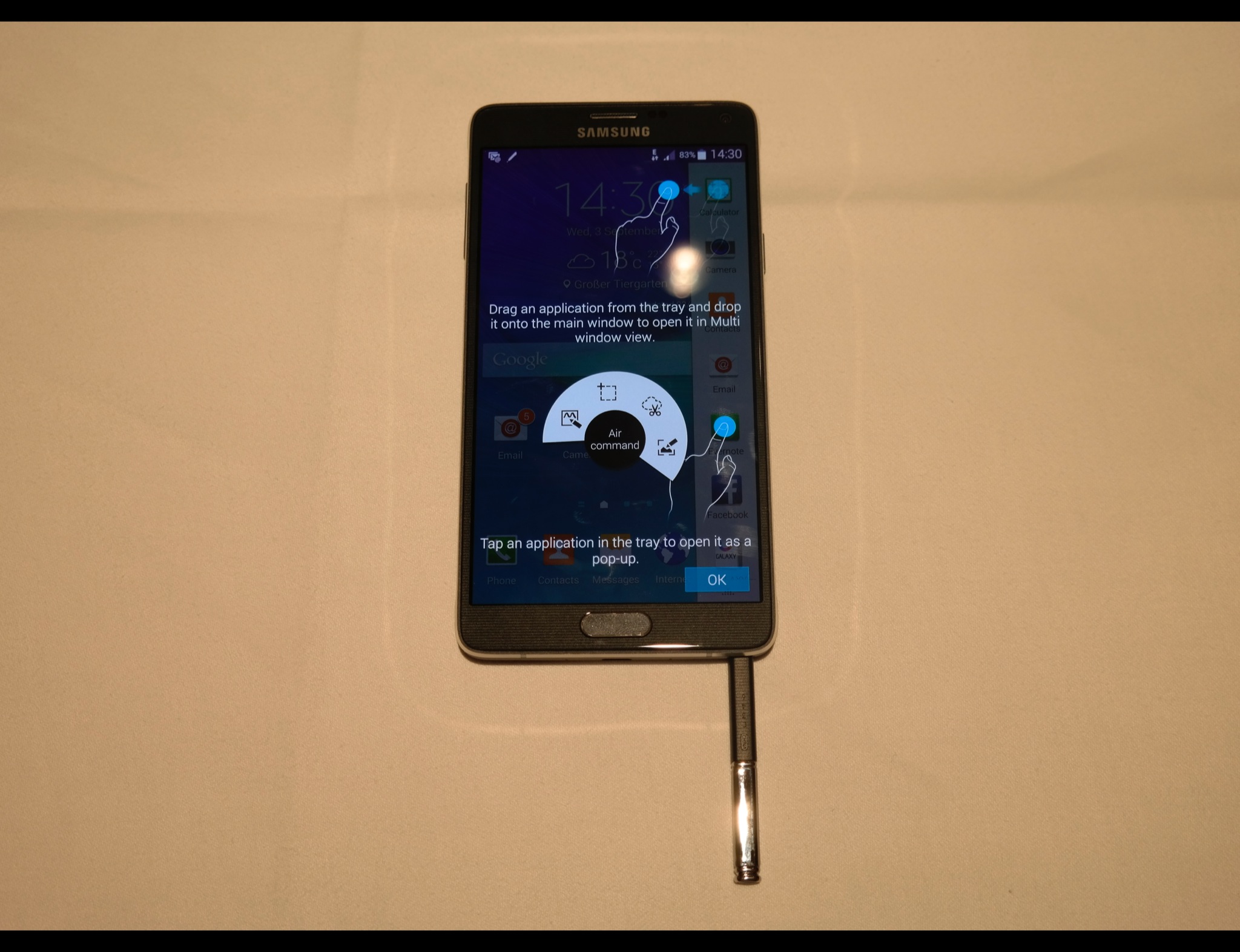 The Note 4’s S Pen has significantly been improved. When compared with the Note 3’s S Pen, the Galaxy Note 4’s S Pen features double the pressure registration points, from 1024 to 2048. The S Note software has also been improved and extended as well and now the S Pen offers a much more authentic pen experience, with a more natural brush effect that perfectly emulates writing on paper with a fountain or calligraphy pen.

Due to the improved pressure sensitivity, writing on the Note 4 feels a lot more like writing on conventional paper. The writing looks more and more like real handwriting and the S Note software also ignores all other input (like your hands) while writing, making it a pleasure to use. It also considers things like the speed of your drawing, for example when your try to draw a straight line. When you draw a straight line quickly, it automatically straightens the line. When you draw it more slowly, it does this a bit less, creating a more shaky line.

The improved S Pen also features a new selection mode, which enables you to draw a rectangle while multi-selecting files (just like on your computer) and also for fast text selection, making it more of a joy to multitask on the Note 4.

The user interface of the Note 4 is mainly the same as the TouchWiz version found on the Galaxy S5, Samsung’s current flagship Galaxy S device. It has, however, improved a lot in terms of multitasking (Multi Window). It now enables users to multitask between applications with one quick gesture (from the top-right of the screen, downwards, diagonally). The user can then directly resize the application to allow efficient multitasking. It also gives the user four new buttons, so they can also choose to (for example) minimise and maximise their applications right away, or close the applications from there. When minimized, the application becomes just a round icon preview, floating on the rest of the user interface.

The S Pen also features a new button when using Air Command, which is called Smart Select. Smart Select enables the users to quickly select pieces of information from the screen. It does this by mainly taking partial screenshots of the screen, allowing you to aggregate all kinds of information at once, from every application on your device. These are also gathered in a floating icon on top of the rest of the user interface.

When your smart selection is done, you can tap on this floating icon to get an overview of your Smart Selections. From here, you can directly email or share those snippets to wherever you like; it even allows you to drag-and-drop this content into other applications.

The S Note application, which is mainly used for note taking, is now also extended with a useful feature for people in college or universities; it allows the users to take a photo of a paper, classroom board or a whiteboard. The angle of the photo doesn’t matter much, as the software will automatically correct these to get a straight and optimized image out of it. It then converts the optimized image into an S Note, which is then fully editable by the end users. This means that most graphs and illustrations would become an image, and all text would be text in terms of handwriting. Samsung also focused on improving the microphones and recording mode on the Note 4. The Note 4 features 3 microphones (1 on the front, the regular one) and 2 on the bottom of the device. These 3 microphones can be used for Noise Suppression while calling, but also for new features like Directional Recording that can be used for recording in Interview Mode or Meeting Mode. A built-in Voice Recorder offers eight different directional voice tagging and a selective playback capability that allows users to isolate and listen to specific voices in a group conversation.

Samsung has also been working on enabling you to make the ultimate selfies! The ‘Selfie angle’ on Note 3 was 77 degrees, on the Note 4 it will be 90 degrees by default and it will feature Wide Selfie mode (panorama-selfie) with an 120 degree viewing angle. Also, to take selfies, one can use the fingerprint/heartbeat sensor on the back of the device as a shutter. 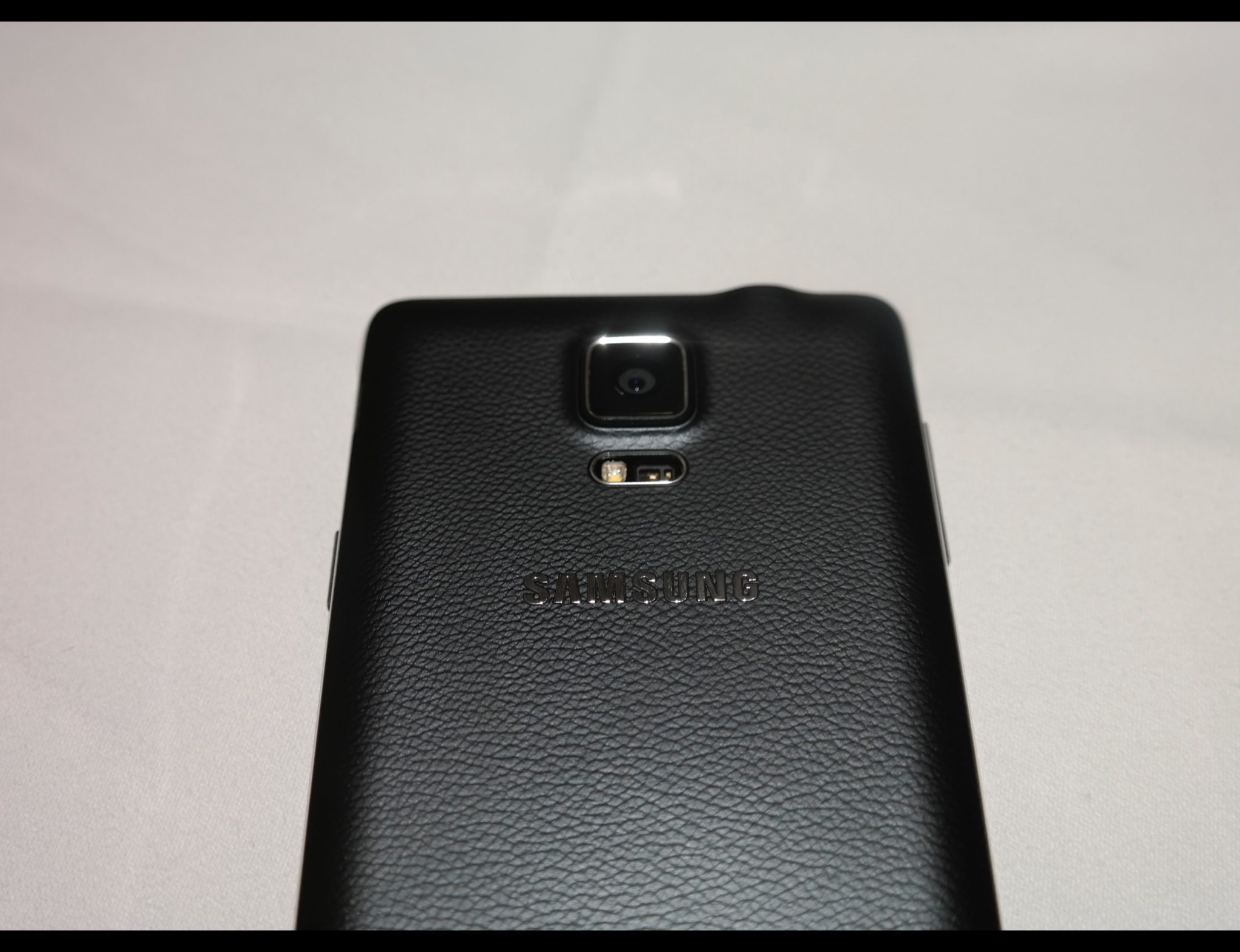 Samsung has equipped the device with a Samsung Exynos 5 SoC with ARM’s big.LITTLE and Heterogeneous Multi-Processing (HMP) technology; 1.9GHz Quad + 1.3GHz Quad-Core, ARM Mali-T760 GPU with a clock speed of 600MHz / Snapdragon 805 SoC with Quad-core Krait 450 CPU clocked at 2.7GHz, 600MHz Adreno 420 GPU, 3GB of 32-bit dual-channel 933 MHz LPDDR3e RAM and 32GB of internal storage, which is expendable via micro SD slot up to 128GB. The device runs on Android 4.4.4 KitKat and Samsung’s latest TouchWiz UX, out of the box.

One other point Samsung focused on was the battery life and the charging times. The Note 4 charges up to 30% faster (measured on a battery of 3200mAh). The fast charging mode allows the user to charge up to 50% of the device in only 30 minutes. This is done by fluctuating the voltage and amperage while charging, a technology that has patents pending for Samsung. Next to that, it also features Samsung’s famous Ultra Power Saving Mode.

We think the Galaxy Note 4 is a very important device for Samsung, and is a worthy upgrade over the Galaxy Note 3. Samsung has really listened to its existing customer base and has created its new design philosophy according to their users’ suggestions. The design of the Note 4 really is spectacular, we couldn’t say this for many of Samsung devices in the past. Previously, Samsung devices were all about ergonomics, but now they are focusing on premium looks and build quality as well. With the Note line, Samsung always brings something new to the table, and it has done exactly the same with the Galaxy Note 4. It’s Samsung’s first global device to feature a QHD (2560×1440) Super AMOLED display, and is the world’s first device to be equipped with a UV sensor. Plus, Samsung is using the world’s fastest SoCs, the Exynos 5 Octa and the Snapdragon 805, to power its latest flagship device.