After a wait of several years, the time has finally come. After the first generation AMOLED tablet (Galaxy Tab 7.7) that launched way back in 2011, Samsung announced the Galaxy Tab S series, marking its return to making tablets with its beautiful Super AMOLED displays, something a lot of folks (us included) had been clamoring for given how impressive Samsung’s in-house display tech has been on the company’s smartphones. The Galaxy Tab S series comes in 8.4-inch and 10.5-inch sizes, and today we take you on the journey to explore what the two tablets have to offer.

An intimate design in a tighter package, that’s what you can call the design of the Galaxy Tab S. Samsung uses the same design elements as it did on the TabPRO series. The Galaxy Tab S series is available in two colors, Titanium Bronze and Dazzling White, and the thing most will notice immediately is that Samsung has gone from a chrome bezel to a bronze one. There’s a bronze lining on the entire tablet: there is a tiny bronze lining around the camera sensor and home button, and one on the Samsung logo on the back as well. 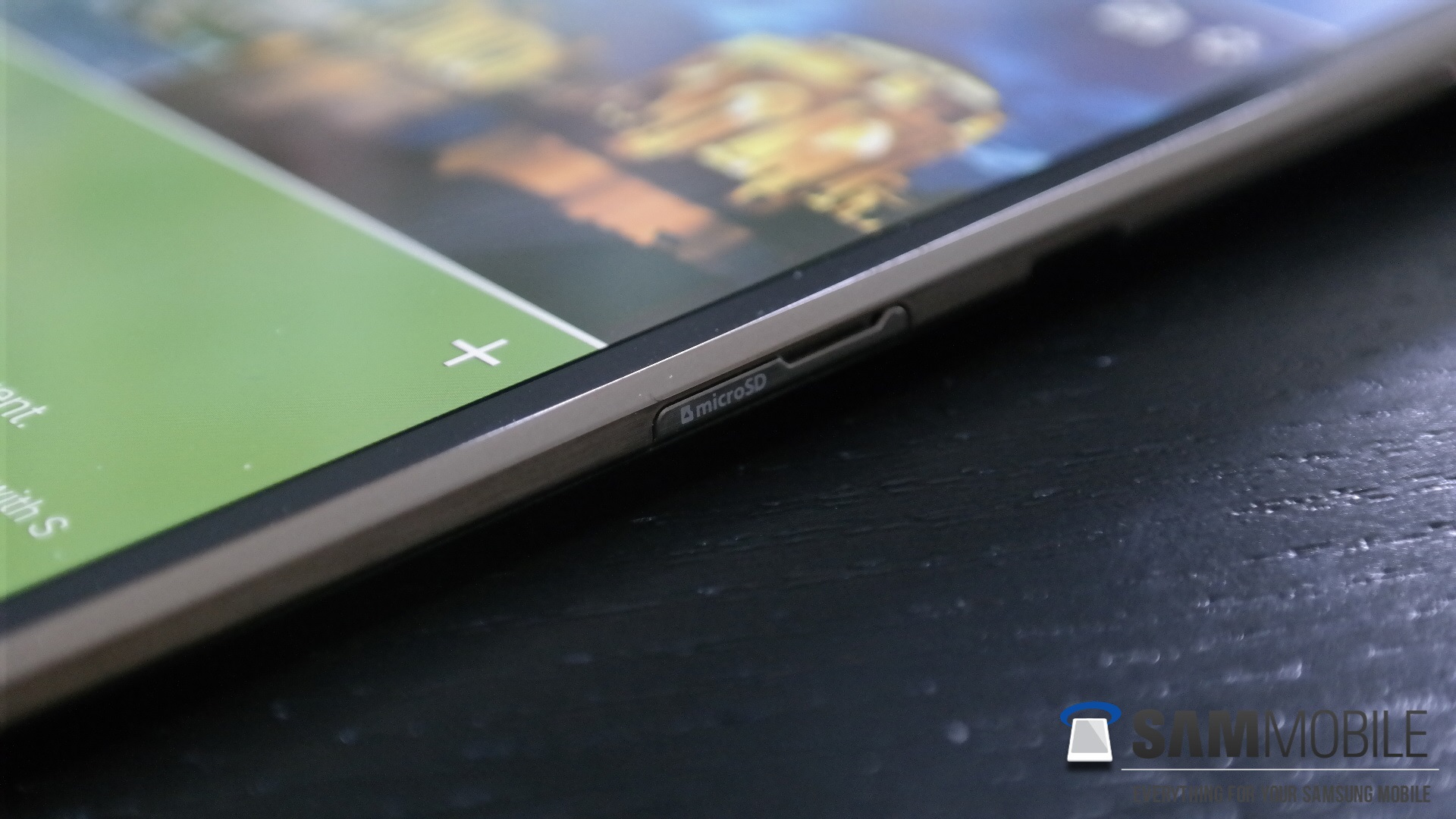 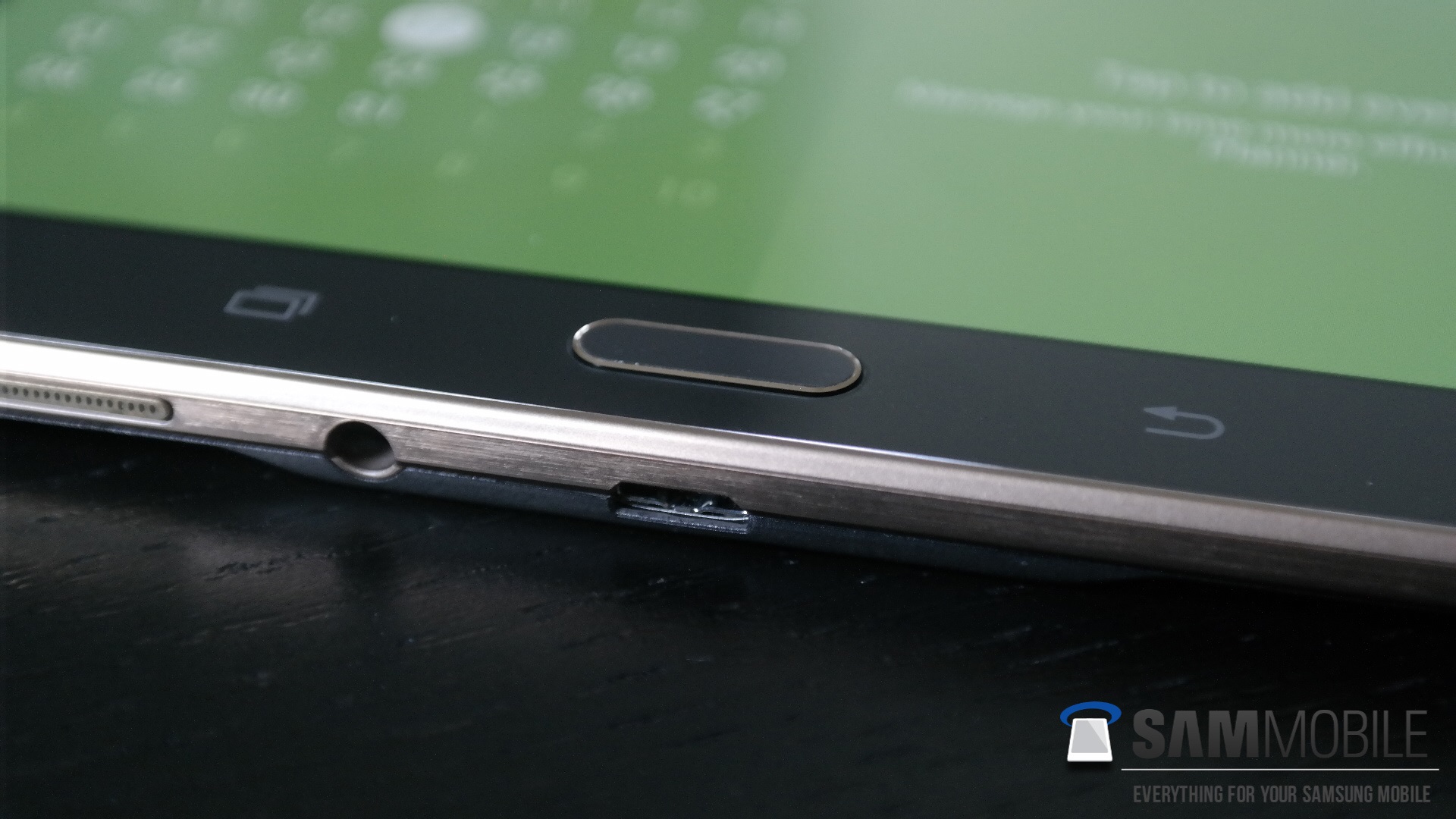 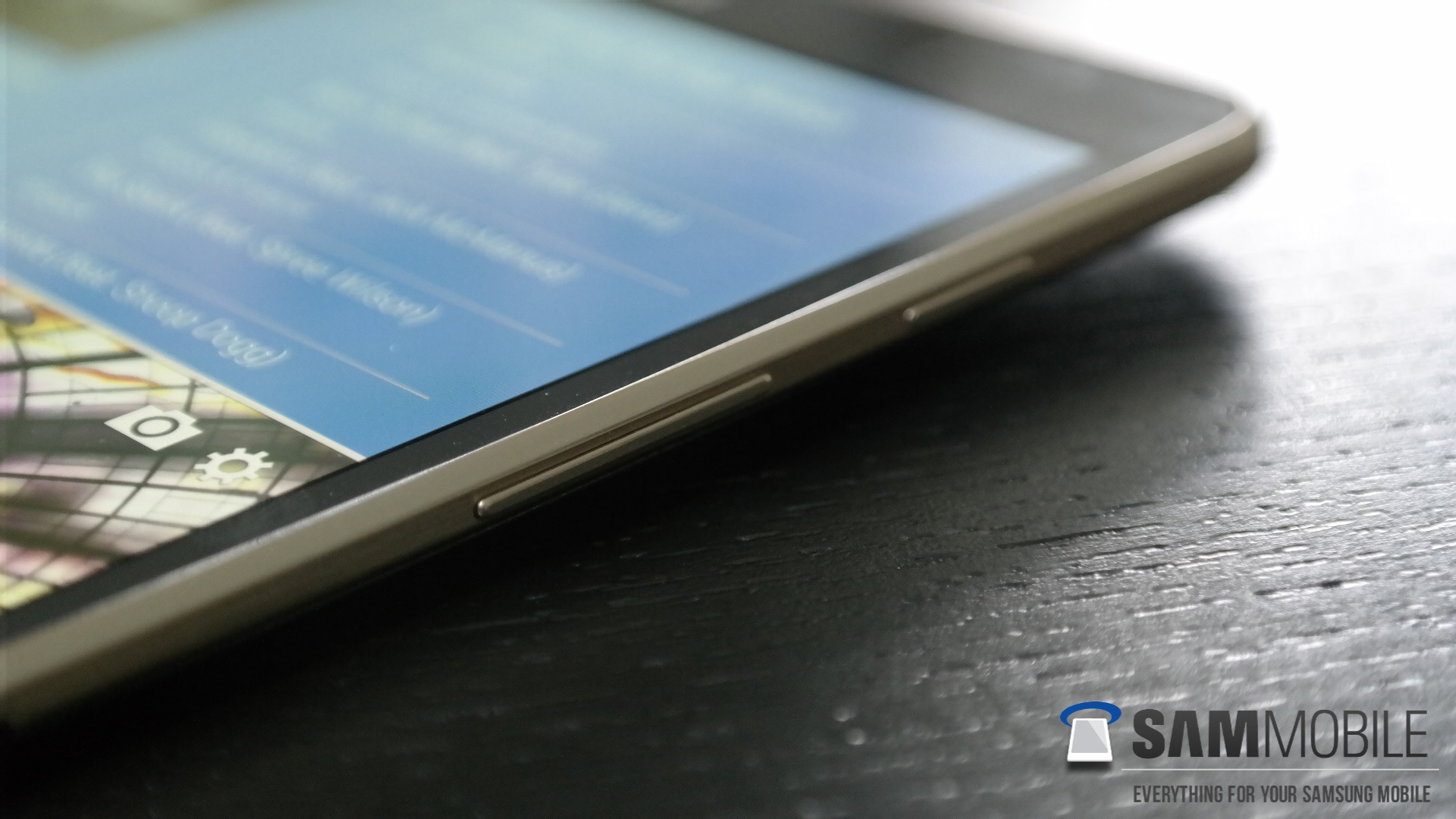 If we look at the Galaxy Tab S from each side, here’s what we can find. On the Galaxy Tab S 8.4, the front side holds the front-facing camera, proximity sensor, home button with integrated fingerprint scanner, and touch buttons (back and recent apps.) On the right side, there’s the power/lock button, volume rockers, infrared sensor, and the microSD slot, while the left side is devoid of any buttons or sensors. At the bottom, you get the microUSB port, 3.5mm headphone jack, and a microphone. Coming to the top, there’s another microphone here, and a speaker. The back is taken up by the camera and LED flash, and the back cover (non-removable) is made from the same material as the one on the Galaxy S5. The so-called dimples provide a soft touch feeling that offers a solid grip and doesn’t attract fingerprints (or hides them, which works just as well.)

The Galaxy Tab S 10.5 is different only in that the speaker is on the side, while the volume rockers and power button are at the top. This is mainly because the 10.5-inch variant will be held and used in landscape most of the time, while the 8.4-inch variant is built for use in portrait orientation. 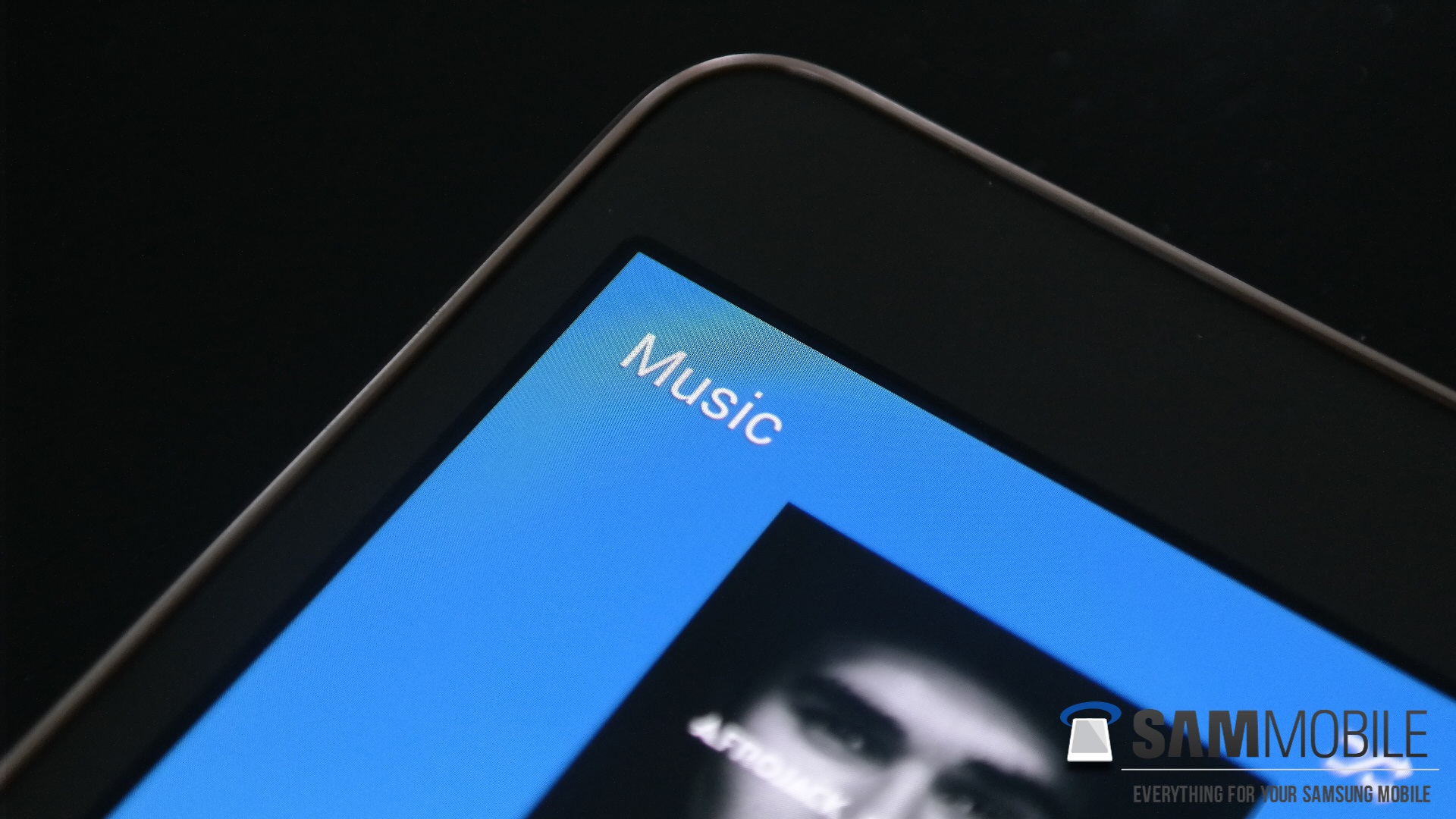 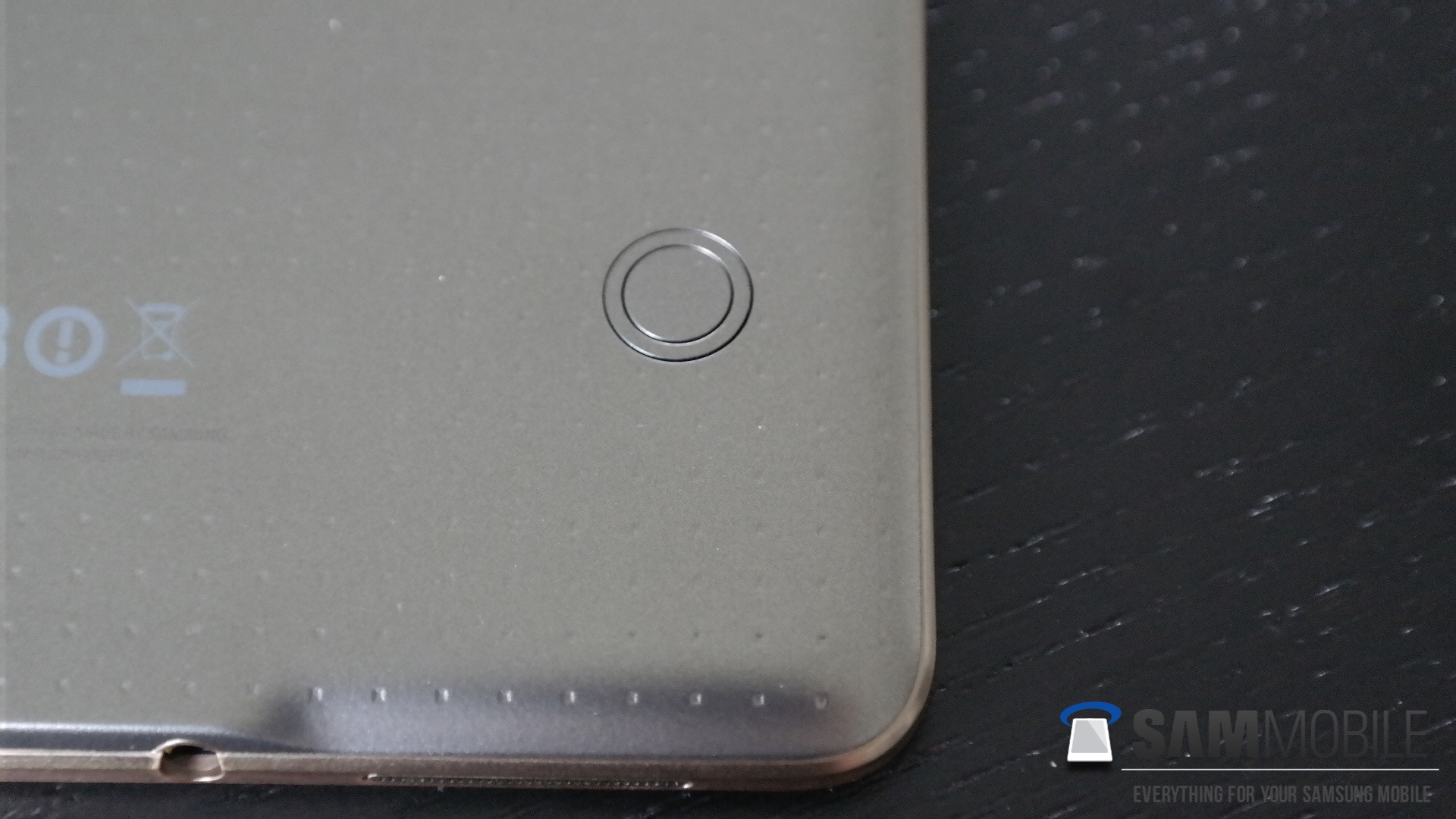 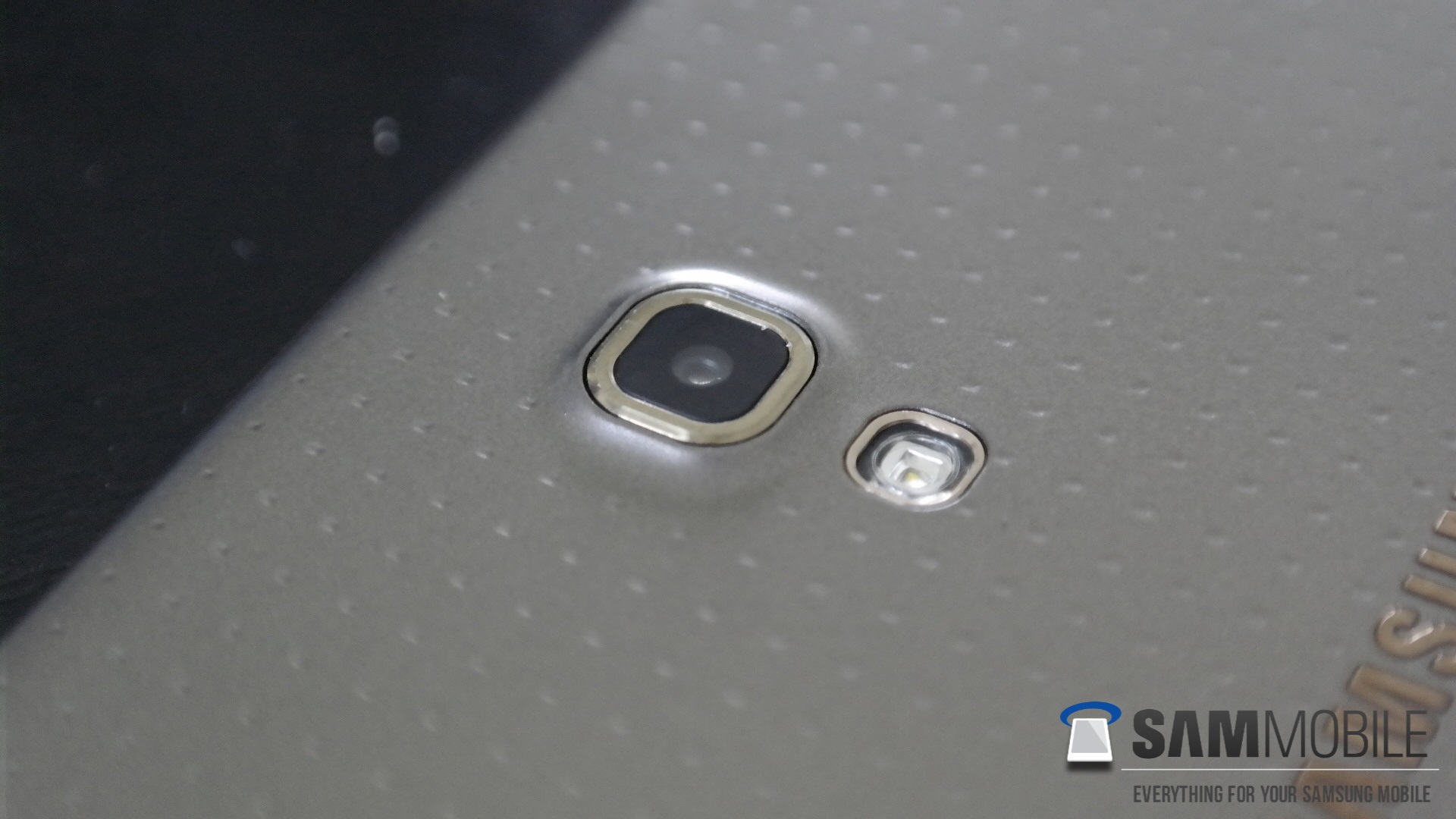 Samsung is using its new Magazine UX on the Galaxy Tab S, similar to the Galaxy TabPRO tablets. The interface works pretty well and smooth thanks to the 3 GB of RAM and Android 4.4.2 KitKat, especially on the 8.4-inch variant. Those who have previously owned a Samsung tablet will feel right at home, which has always been a strong suit of Samsung’s user interface. Samsung’s home launcher might be called boring by some, but it is very recognizable for the general public. 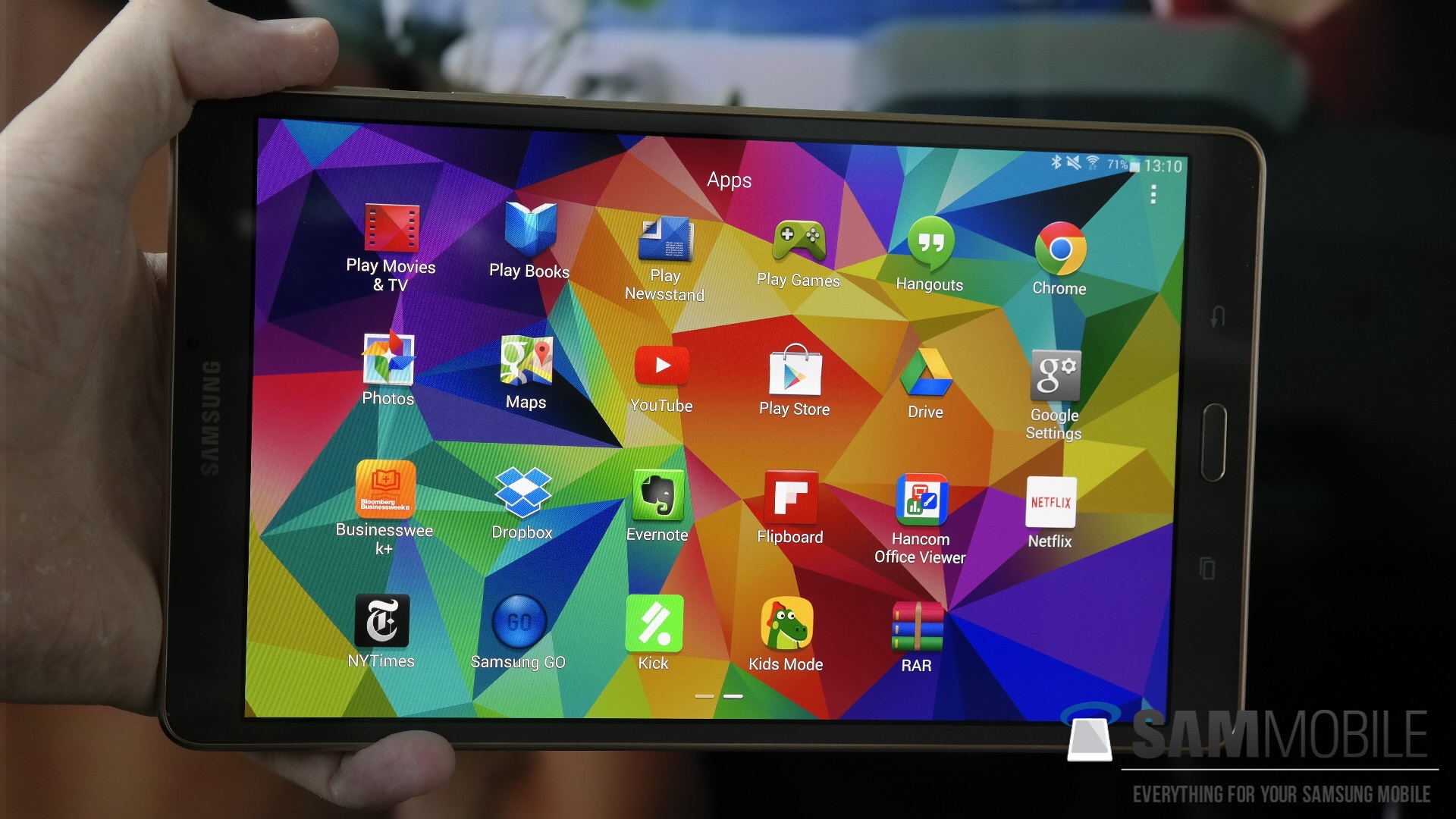 A few features from the Galaxy S5 can be found on the Galaxy Tab S. There’s Ultra Power Saving Mode for extreme battery saving, attained by disabling most apps and connections and disabling the color output of the screen. Then there’s Toolbox – Toolbox is a small overlaying button that, when pressed, will show a few of your favorite apps for quick access from anywhere on the device. Features like Smart Stay (keeping the screen on when the user is looking at it) and Multi Window (for having two apps on the screen at once) are present as well. A good feature here is that you can have multiple user accounts and secure each with the user’s fingerprint. Samsung’s Kids Mode is present as well, which is now filled with over 900 apps specifically designed for kids. Samsung has also pre-installed Sidesync 3.0 – this is an app that lets you connect your phone to your tablet and receive phone calls on the latter, and also use various phone functions right on the tablet’s display. 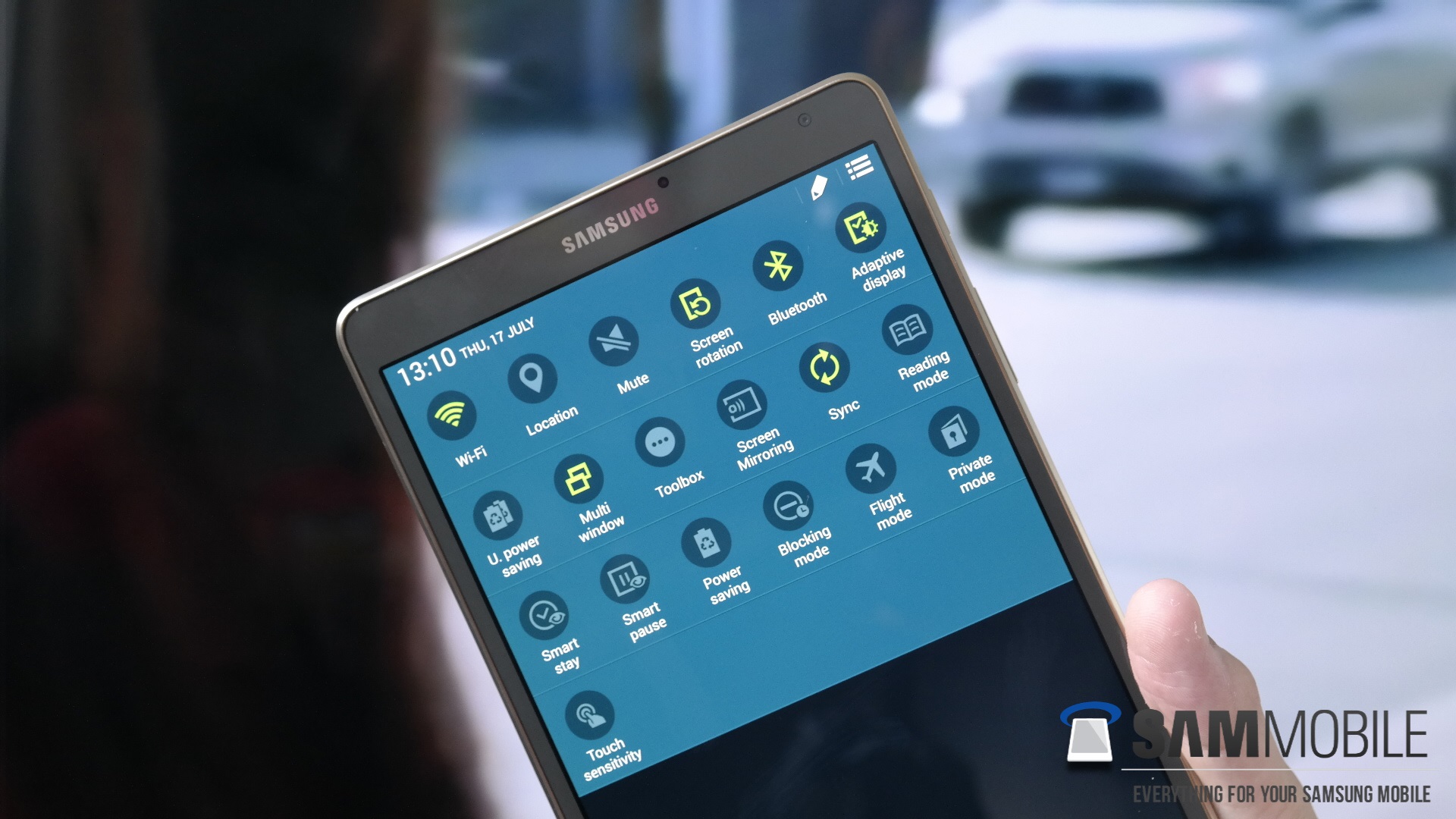 The most important feature of the Galaxy Tab S series is the display. Like we said, Samsung has used a Super AMOLED display on a tablet for the second time, and we have to say that it’s the most beautiful screen of any tablet on the market till date. As always, the colors of the display are vibrant and pop out of the screen. The Galaxy Tab S 8.4 uses a screen resolution of 2560×1600 (WQXGA), which results in a pixel density of 359 (and 287 ppi on the 10.5-inch version), which is higher than that of Apple’s Retina display on the iPad mini. 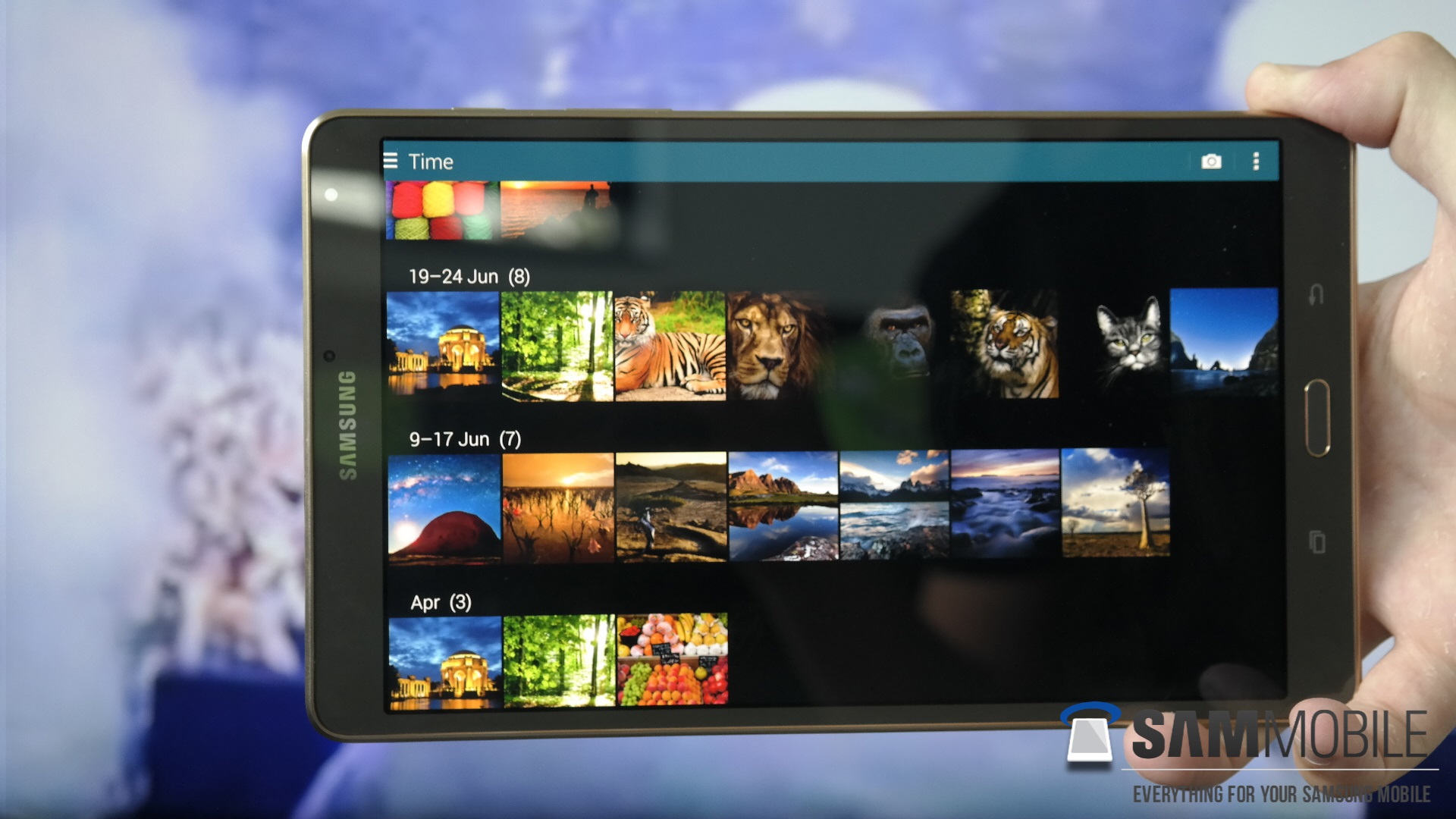 The color reproduction and contrast ratio is way higher than what we get on an LCD display, and everything looks brilliant when the screen is so big. But that isn’t all that is going on with the beautiful display on the Galaxy Tab S. Samsung offers various screen modes: Adapt Display, AMOLED Cinema, and AMOLED Photo. AMOLED Photo is the one closest to a true RGB display output, which is to say the colors the most natural in this mode, while the AMOLED cinema mode is great for video watching.

When you want to play videos, Samsung automatically sets the display mode to AMOLED Cinema, but with a simple touch of a button in the top part of the screen you can turn it off if you so wish. If you ask us, for watching videos Cinema mode is perfect, but if you’re viewing videos you’ve recorded yourself, you might want to turn it off. 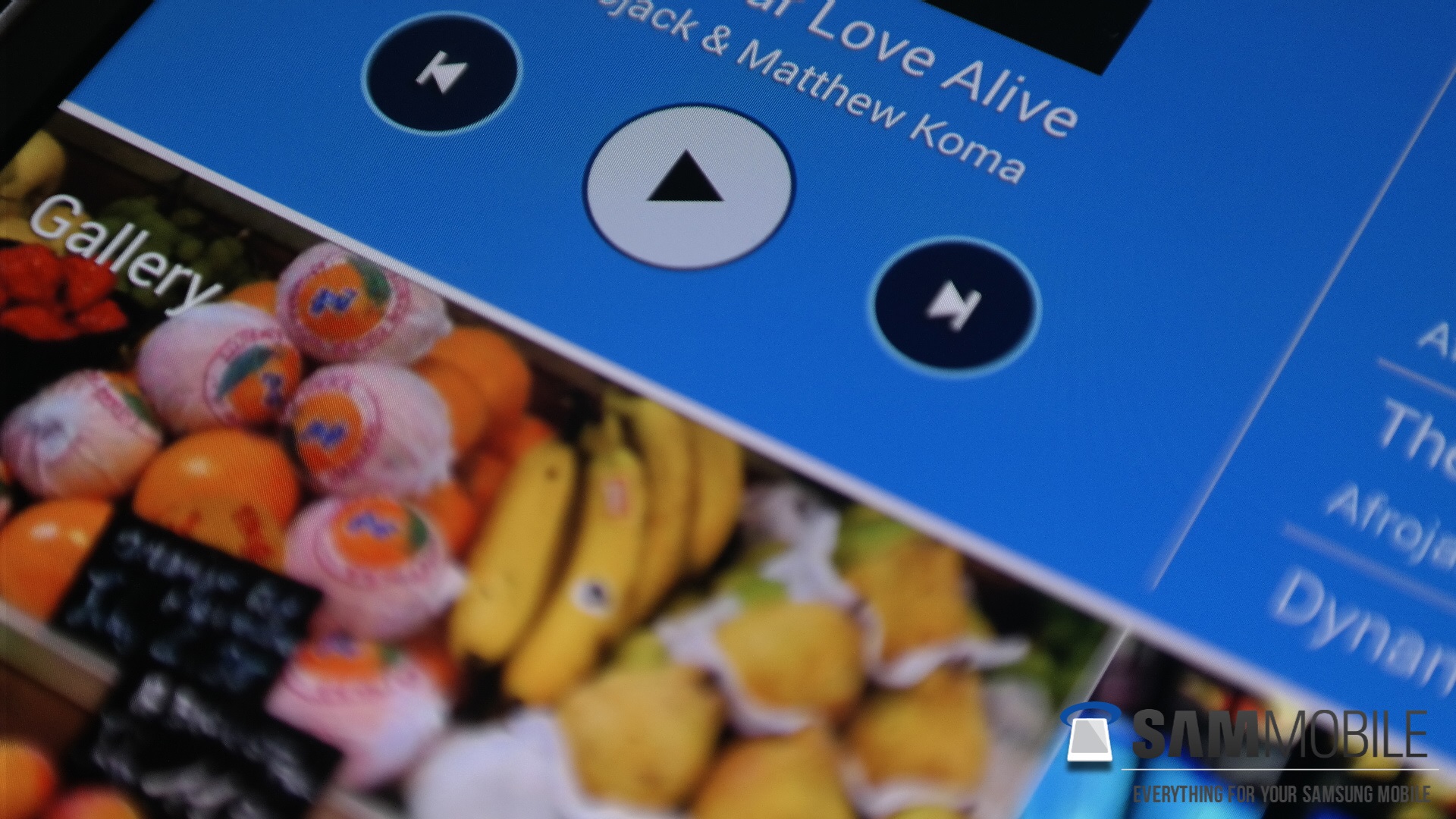 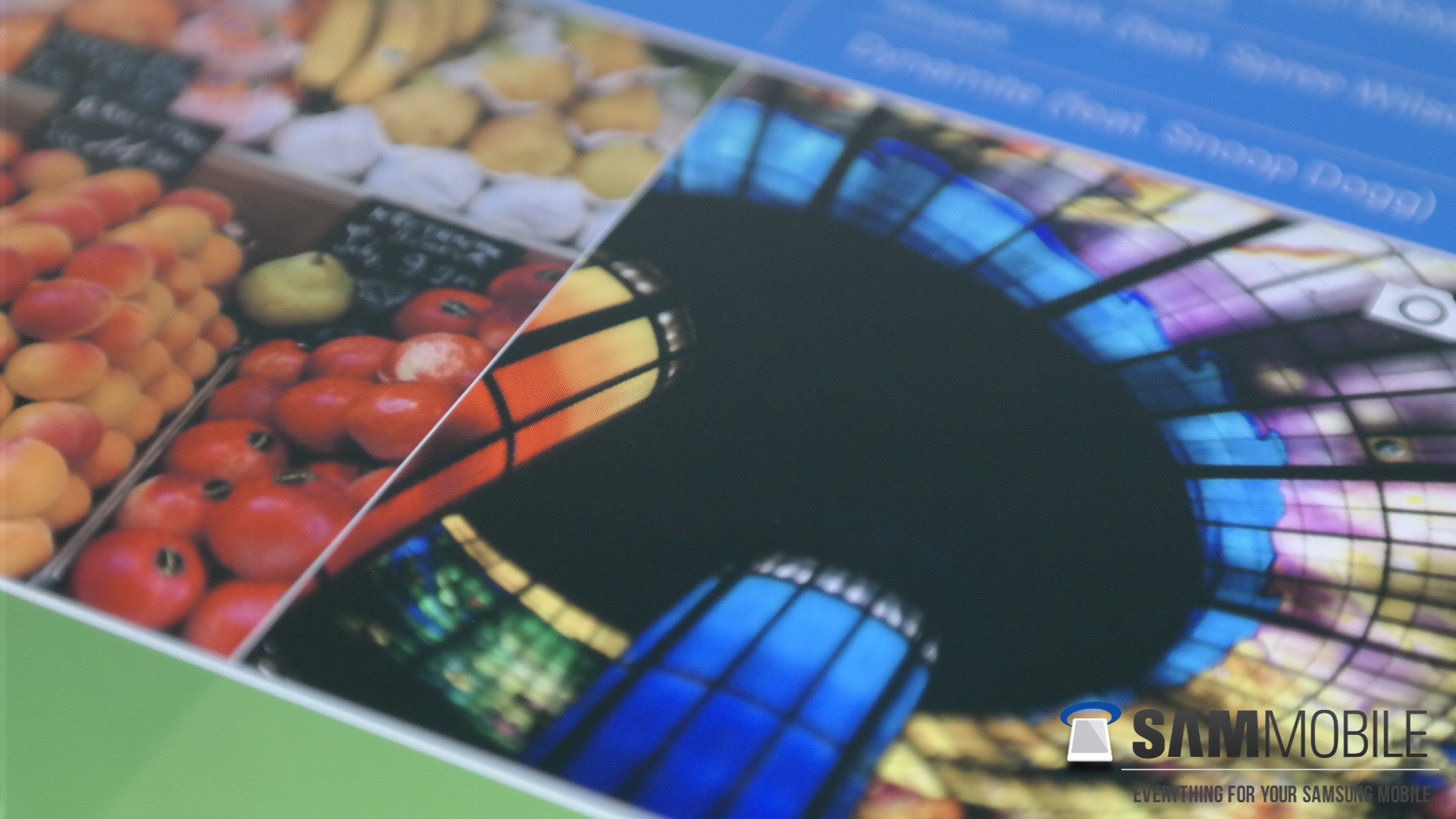 The Galaxy Tab S tablets are outfitted with an 8-megapixel camera on the back, and a 2.1-megapixel front-facing camera. While a camera on a tablet is mostly considered a gimmick, we have to say the Galaxy Tab S lineup takes nice photos for a tablet, with maximum photo resolution of 3264×2448 and video recording at Full HD (1920×1080) resolution. The camera interface is the same as the one on the Galaxy S5, and below you can see some pictures we took with the Galaxy Tab S 8.4.

One of the biggest advantages on the Galaxy Tab S is the display tech. A huge benefit of an AMOLED display is that it is very battery friendly when displaying blacks – each pixel is lit individually, so whenever black is displays all pixels get turned off, resulting in better battery life. With Ultra Power Saving Mode enabled, a single screen is shown in black and white and the processor’s speed is limited, resulting in improved battery life when you really, really need it.

The Galaxy Tab S 8.4 sports a 4,900 mAh battery and the Tab S 10.5 has a 7,900 mAh battery. Both tablets perform very well and we managed to get 3 to 4 days of battery life on a single charge. What was striking was that the battery lasts considerably longer while watching videos than with normal use, which is well and good considering those striking AMOLED displays will be used for videos by quite a few folks.

Spec-wise everything looks great, but in practice it’s not always that good. Samsung opted for its Exynos 5420 octa-core processor (1.9 GHz quad-core + 1.3 GHz quad-core) and Qualcomm’s Snapdragon 800 processor (2.3 GHz) that we saw on the Galaxy Note 3 last year, and now and then the Tab S tablets struggle with all those pixels and show some lag. On the Tab S 10.5 it is sometimes so bad that the entire home screen needs to be redrawn. This is due to unoptimized software and the Magazine UX. Magazine UX is a very slow launcher when you use it to its full potential – like when you have it filled with email, social media and a few other widgets, which makes it take a few seconds to load.

Other than that, there is not much to complain about as far as performance is concerned, though we would certainly like Samsung to first optimize its software before shipping it to consumers in the future.

After waiting for years, we finally got a new AMOLED tablet from Samsung, and we think the Galaxy Tab S tablets have the most beautiful displays of any tablet on the market, a true opponent for Apple’s iPad Retina that surpasses it in the sheer visual appeal. Samsung has had these screens in-house for years, but they were too expensive to produce, and we’re certainly glad Samsung managed to find a way to lower costs and brought tablets sporting AMOLED displays to market once again. We were also surprised by the design of the Galaxy Tab S range, with the bronze bezel giving it a premium feel while the perforated back cover offers a nice grip. Even the Galaxy Tab S’ book cover mechanism works really great, securing the tablets in place and never making us worry that they might fall out of their place. 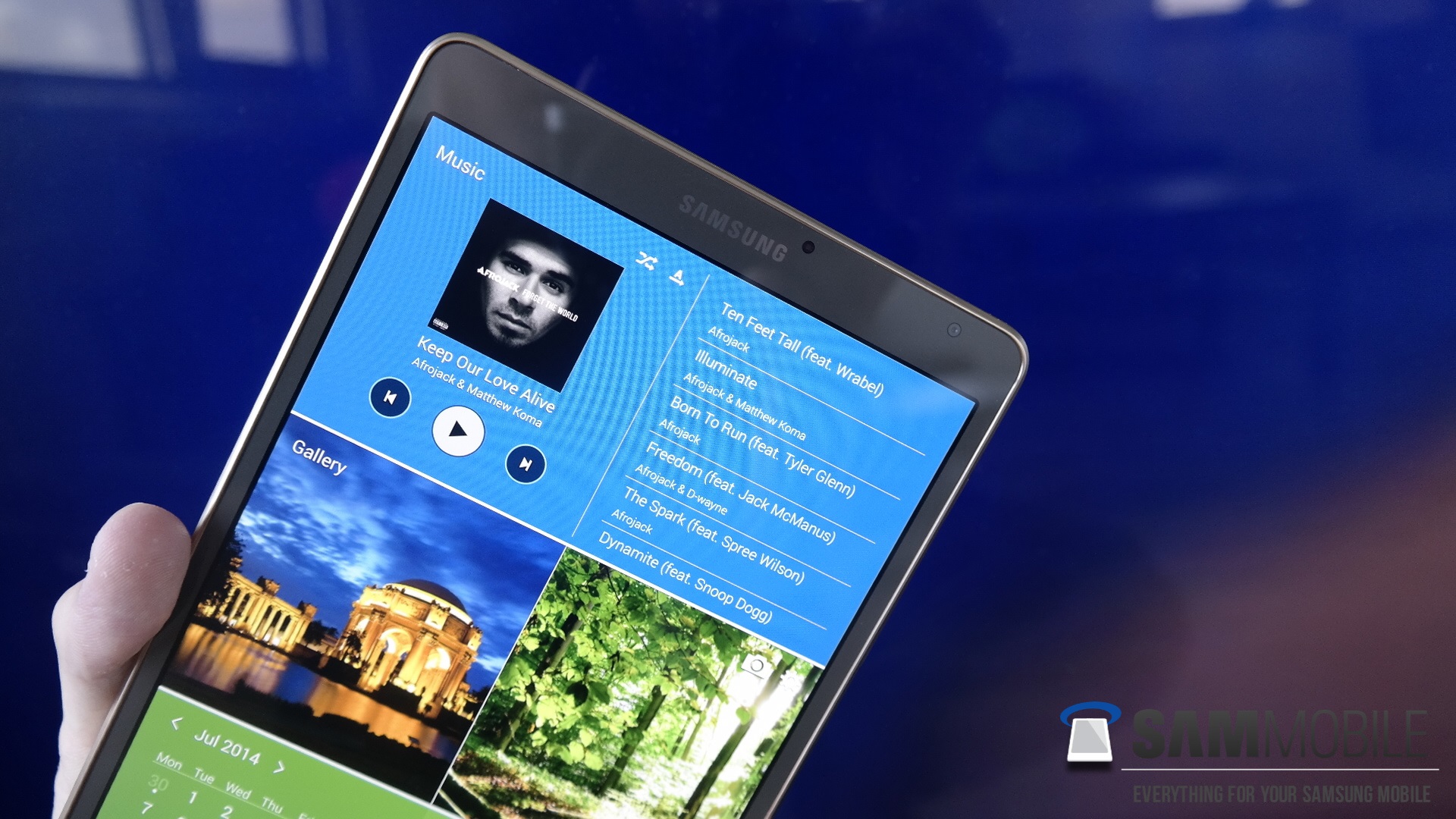 What we didn’t like was the Magazine UX – it is a resource hog and there is no option to turn it off, which is a huge oversight. If you want to speed up the Galaxy Tab S, you will need to use standard widgets or opt for a third-party launcher (though you will miss out on many Samsung widgets this way.) There is nothing to complain about the battery life, as during our tests we could play several videos and still have juice left for normal operation. It’s also a good thing that Samsung has implemented Ultra Power Saving Mode similar to the S5, offering better battery life and proving that not all features are gimmicks, unlike the fingerprint scanner which we think isn’t really required on a tablet. 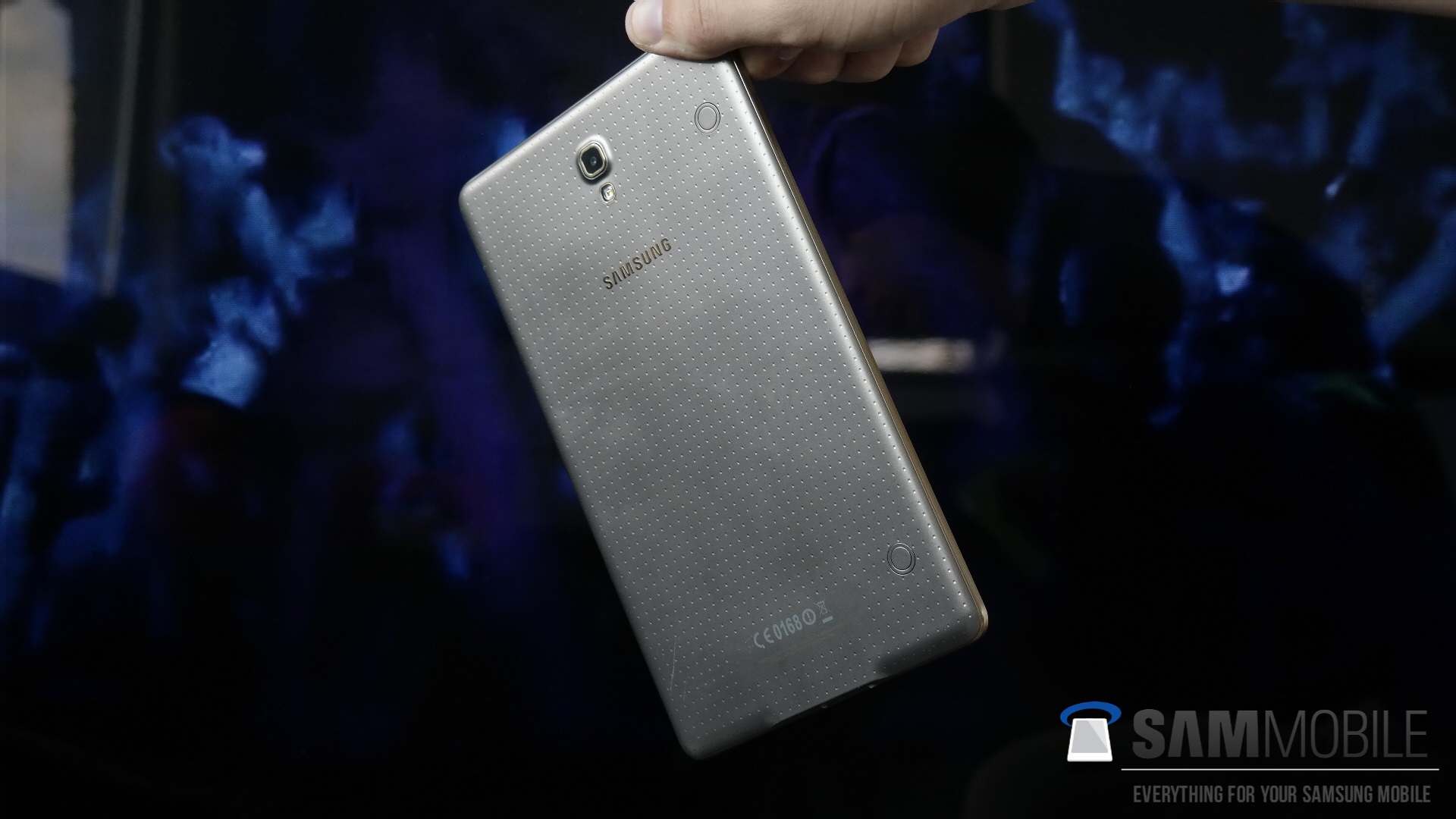 Do we recommend the Galaxy Tab S tablets? Well, that would be a big YES! Our only hope for the next generation is that Samsung ditches the hardware and capacitive buttons and opts for on-screen ones, and optimizes the software for better performance in some areas.

Adding everything up, we came to the conclusion that both tablets are worthy of a 5-star rating, with the following bullet points to take away: 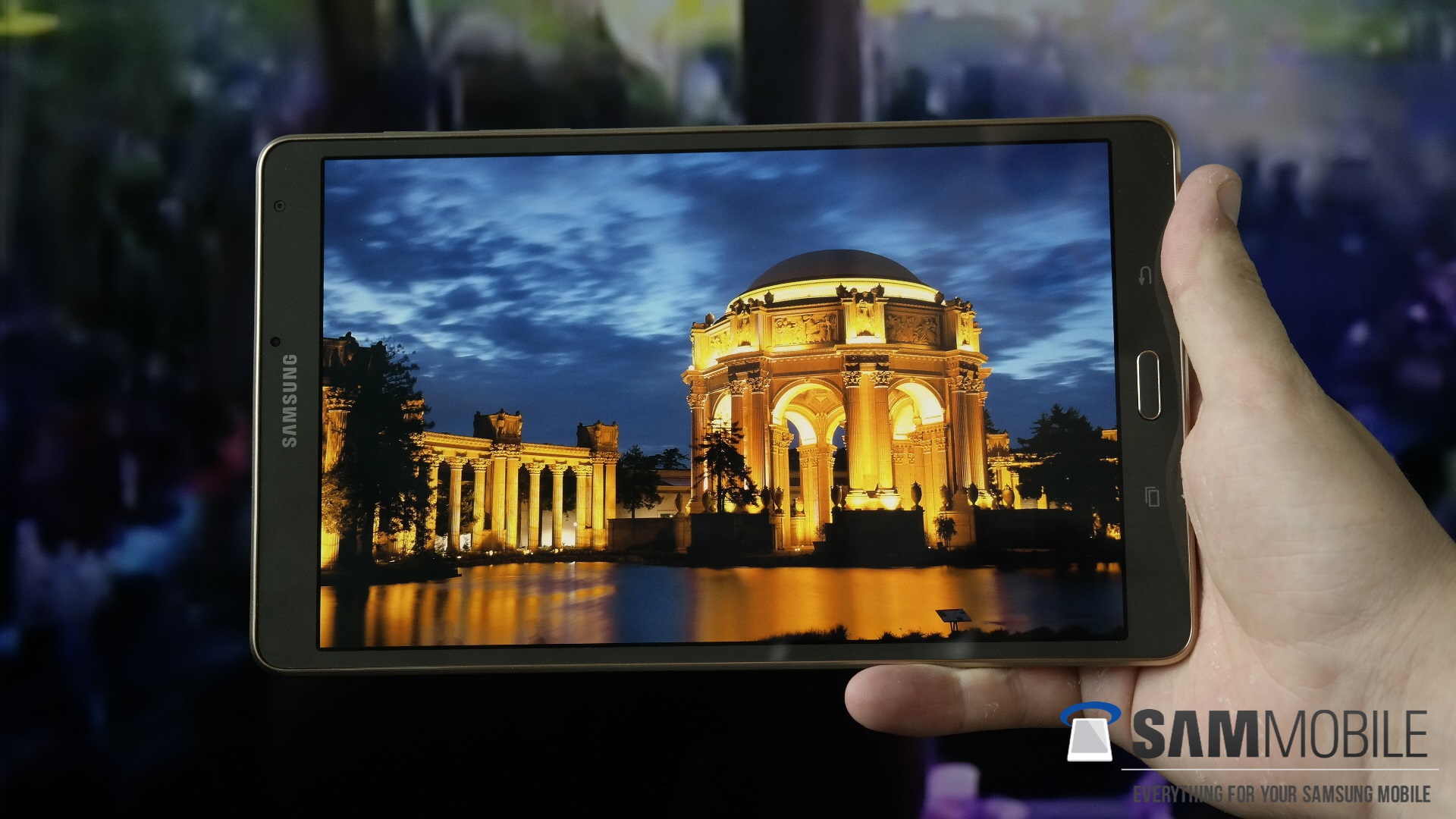 The Galaxy Tab S 8.4 is the second Samsung tablet with an 8.4-inch screen, the first one being the Galaxy TabPRO 8.4. The big difference between the two are the displays, with the former using an AMOLED display and the latter an LCD unit, though with the same resolution of 2560×1600 pixels. To provide a good comparison of the two, we have filmed both tablets – the Tab S 8.4 is set to cinema mode, which is best for videos, though even with cinema mode turned off the difference is striking.

See for yourself in the video below.

You’re probably wondering what the point is of the comparison. Well, given the difference in the displays, we’ll have to say that the Galaxy Tab S is the better choice any day. The Galaxy TabPRO will no doubt attract more consumers thanks to a price that 50 to 100 Euro cheaper; however, we would recommend the Galaxy Tab S if you really want to see what Samsung has to offer with its AMOLED displays, and also for a better design and polish than the Galaxy TabPRO series.