Samsung Galaxy S4 update rolling out, seems to prep the device for use with KNOX 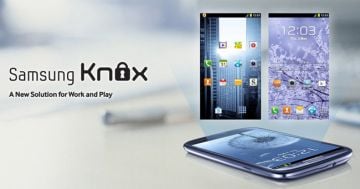 Samsung recently announced that its KNOX security suite would be opened for use to all consumers instead of those in enterprise. Samsung now seems to be in the process of getting things ready to reach that goal, as a new update is rolling out for the Galaxy S4 (GT-I9505) in a few countries that adds the necessary system files for KNOX. The application itself is not yet ready for use, but the addition of the requisite files means we should see it all finalized in another update down the line (possibly through the Android 4.3 update).

For those wondering what KNOX does, it is basically a security platform that integrates itself with Android’s framework and the device hardware to create a “container,” a separate execution environment for apps to run and store data. Any apps that are run inside this environment have their data safe and sound from those outside it, allowing one to run trusted apps without fear of having their data compromised. The Galaxy Note 3 already supports it by default, and similar software updates will add the feature to the Galaxy S3 and Note II as well.

Details are scarce at this moment, but we’re in the process of flashing the new firmware to try things out, so be sure to check back later on for more information. For now, be sure to check if the update is available for your phone in Samsung’s Kies PC Suite, though it should be arriving over-the-air as well.

SamMobile: Please wait for your country to update.

Galaxy S9 and Galaxy A8 Enterprise Editions launched in the Netherland …

Samsung has launched Enterprise Edition variants of the Galaxy S8, Galaxy S9, and the Galaxy A8 in the Netherl …

Galaxy S9 and Galaxy A8 Enterprise Edition launched in Germany

Samsung beefs up security on their 2018 Smart TVs with Knox

Though appreciated for their performance and design, Samsung Smart TVs don’t have the best reputation wh …