We just received this specifications and sketch of the device from an insider who got it from the GT-I9300 (most likely the Galaxy S3) official Service Manual.

See the image below!

As you can see the Galaxy S3 will sport a homebutton, and will have a NEW type of Super Amoled screen which will measure 4.8″. According this manual the Processor speed is clocked at 1.5 GhZ, which is strange because Samsung introduced today their 1.4 GhZ Quad-Core processor. If you take a closer look at the front of the device you can see a notification-led on the left-side of the front-speaker, this could be due the wireless charging of the phone, which will be the case according the latest rumors.
Unfortunatly the camera won’t be a 12 mp according this speclist however this could be one of the first service manuals according our inside.

Update here is the sketch of the back 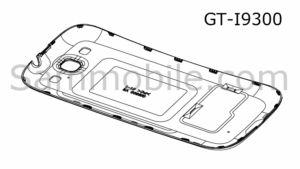 What do you think about these specs?  Let us know in the comments below.