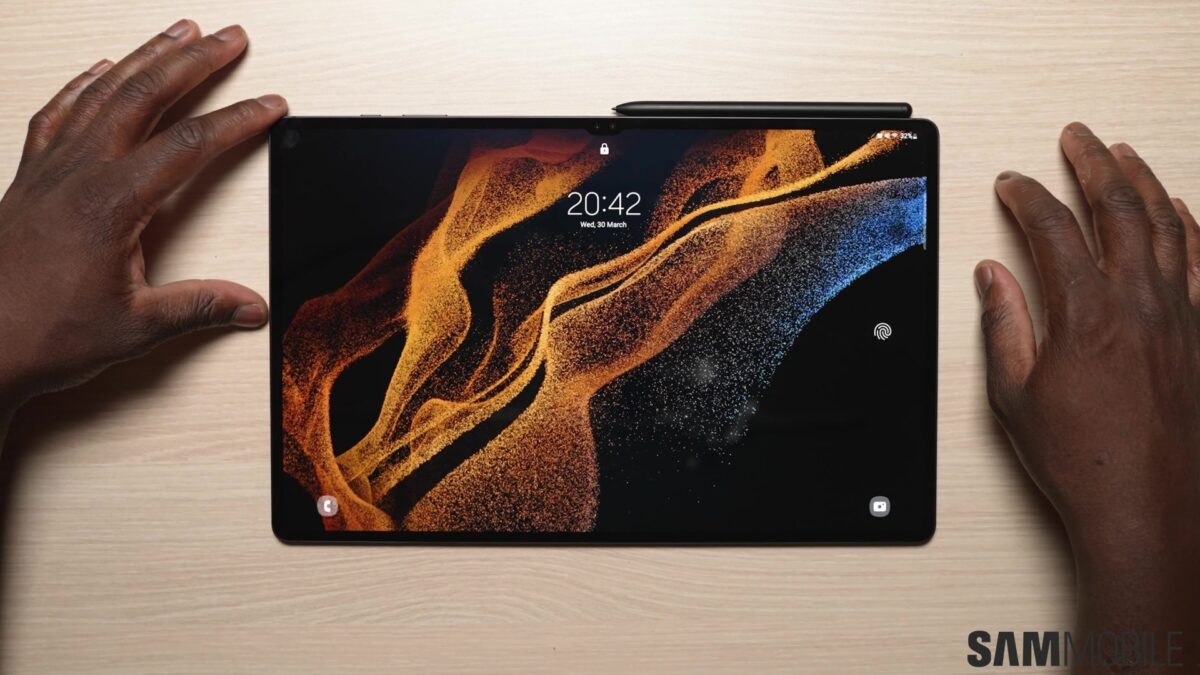 At first glance, the Galaxy Tab S8 Ultra seems to be one of the best Samsung tablets ever made. The company has switched things up for its tablet lineup in 2022. For the first time ever, it has released three models of its flagship tablet for the year. The “Ultra” variant that was previously limited to its smartphones has now made its way to the Galaxy Tab S series.

The Galaxy Tab S8 Ultra is an absolutely bonkers device. It’s the biggest and most powerful tablet yet from Samsung. There’s S Pen support and relevant productivity improvements to make this the best option for power users.

Does it really deliver on all of the promises that Samsung makes? This is also Samsung’s most expensive flagship tablet yet, so does it justify the price tag? That’s what we’ll unpack in this Galaxy Tab S8 Ultra review. 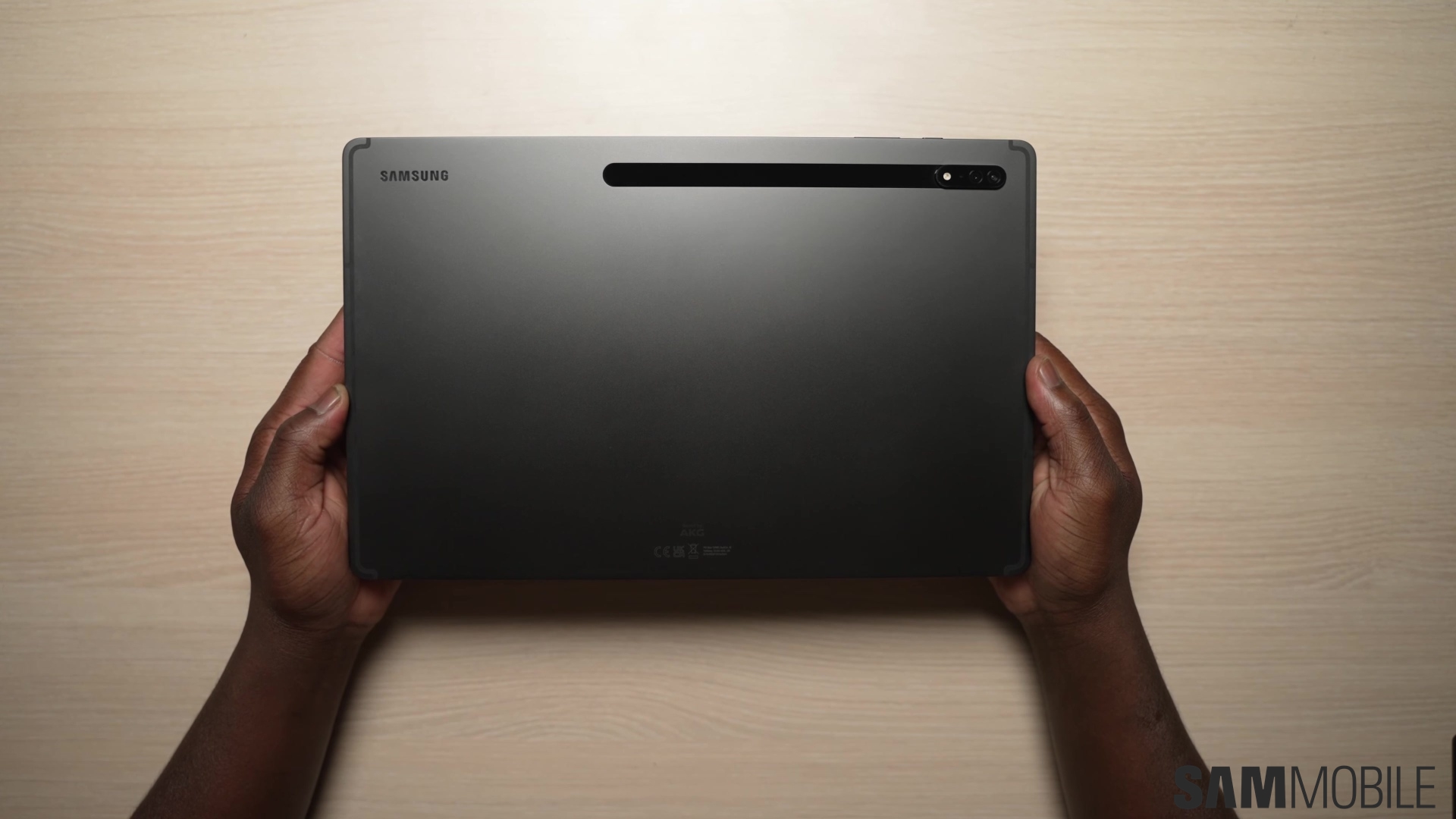 Make no mistake, the Galaxy Tab S8 Ultra is a big tablet. With a 14.6-inch display and 326.4 x 208.6 x 5.5mm in measurements, this tablet has a noticeable presence. The challenge Samsung had was to balance this large footprint with a design that this premium device deserves.

The unibody all-metal construction and slim profile help strike that balance. The fit and finish are exceptional. It feels every bit the premium tablet that you’d expect it to be. Using it one-handed, particularly with the S Pen, can feel a bit intimidating just because of its massive footprint and 726g weight.

You can’t help but realize that this tablet was meant to be used with its Book Cover Keyboard Pro. The kickstand provides it with a sturdy base and really lets you get the best user experience out of it.

The button placements on the right side of the frame feel familiar. There’s also a microSD card slot at the bottom alongside the USB-C port. There’s no 3.5mm headphone jack so opt for one of Samsung’s wireless earbuds. The camera setup is at the back alongside a magnetic strip for the S Pen. 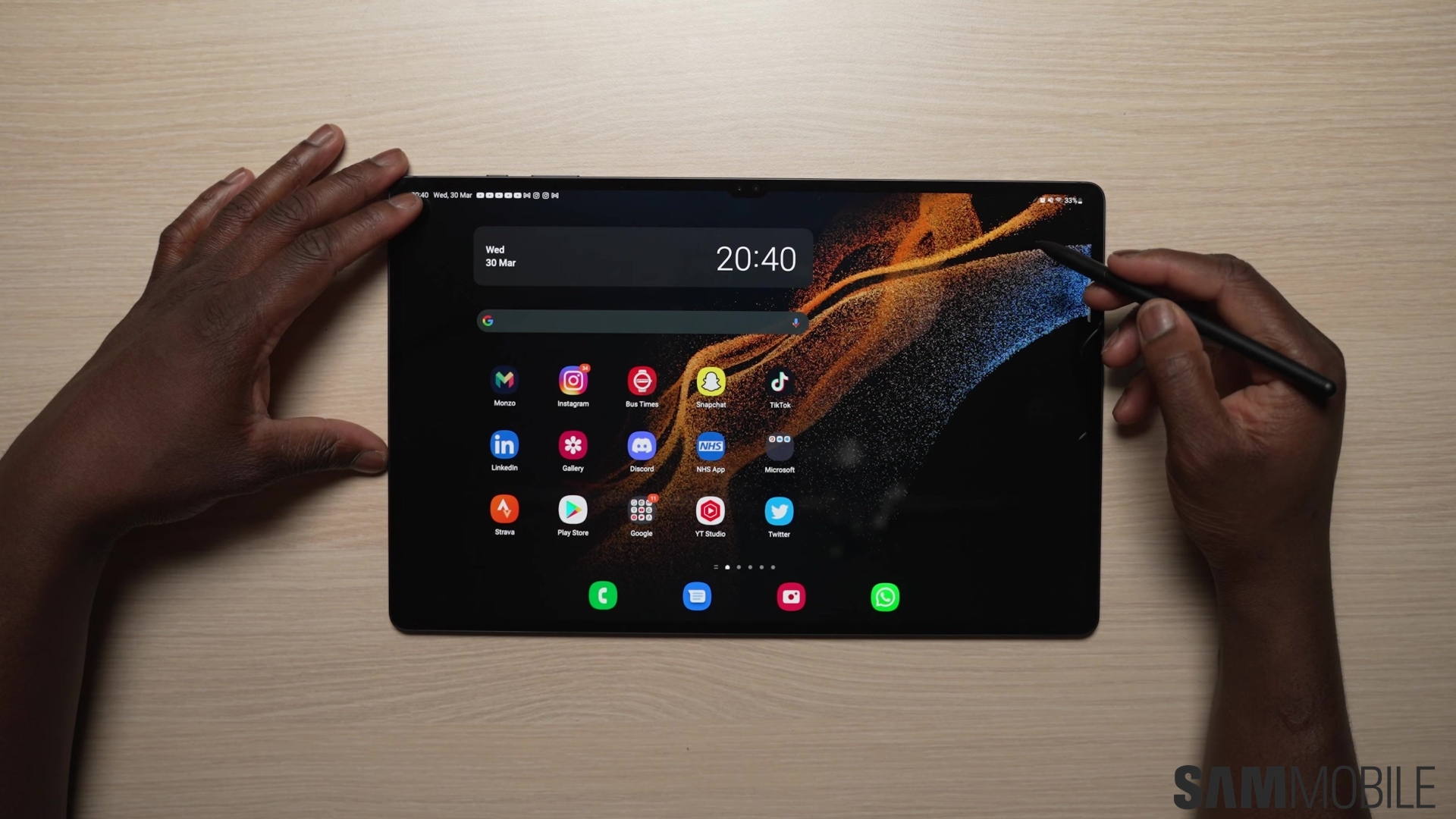 Now, this is where the Galaxy Tab S8 Ultra really comes into its own and precisely why it’s such an enjoyable tablet to use. The 14.6-inch WQXGA+ resolution Super AMOLED display has a 120Hz refresh rate. The bezels are slimmer than they have ever been on a Samsung flagship tablet, allowing for a truly immersive viewing experience.

This is the first time that we have had a notched display on a Samsung tablet. It’s one of the reasons why the bezels are so slim. The notch itself is quite small and doesn’t feel like an obstacle at all. There’s a fingerprint sensor embedded in the display as well.

The screen itself is nice and bright with vibrant colors. It’s just a joy consuming content on this large screen. The large screen real estate is also great for productivity. You can have multiple apps open at the same time and jump between them with ease.

Samsung has equipped the tablet with AKG-tuned quad speakers. They’re so loud and clear that in our testing, we never felt the need to use them at full volume. There’s basically no distortion or breakup in the sound and you’re guaranteed a top-tier audio experience. 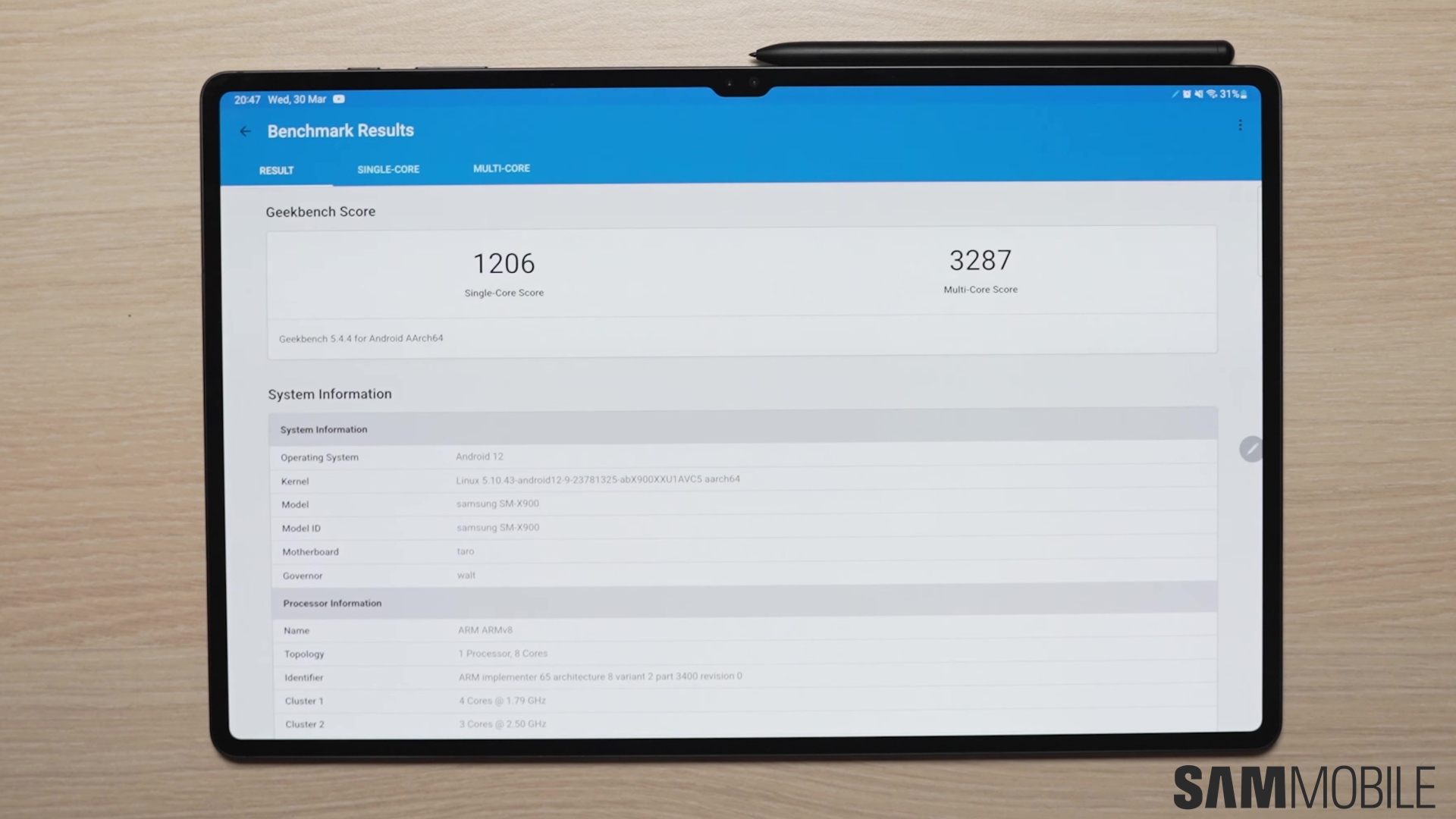 The Galaxy Tab S8 Ultra comes with the latest Qualcomm Snapdragon 8 Gen 1 chipset with up to a staggering 16GB of RAM and 512GB of internal storage. That’s more than what you’d get on most laptops in this price range. On some level, it does seem that Samsung intends the Galaxy Tab S8 Ultra to be a laptop replacement, but mere specs does not a laptop make.

There’s more power on offer here than you’ll know what to do with. From running heavy games to serious multi-tasking, the Galaxy Tab S8 Ultra can handle it all without breaking a sweat. The software is well optimized with the interface feeling pretty nifty.

Samsung’s DeX platform gets to take full advantage of all of this power. However, DeX is still far from a Windows replacement, so it really can’t take your laptop’s place. 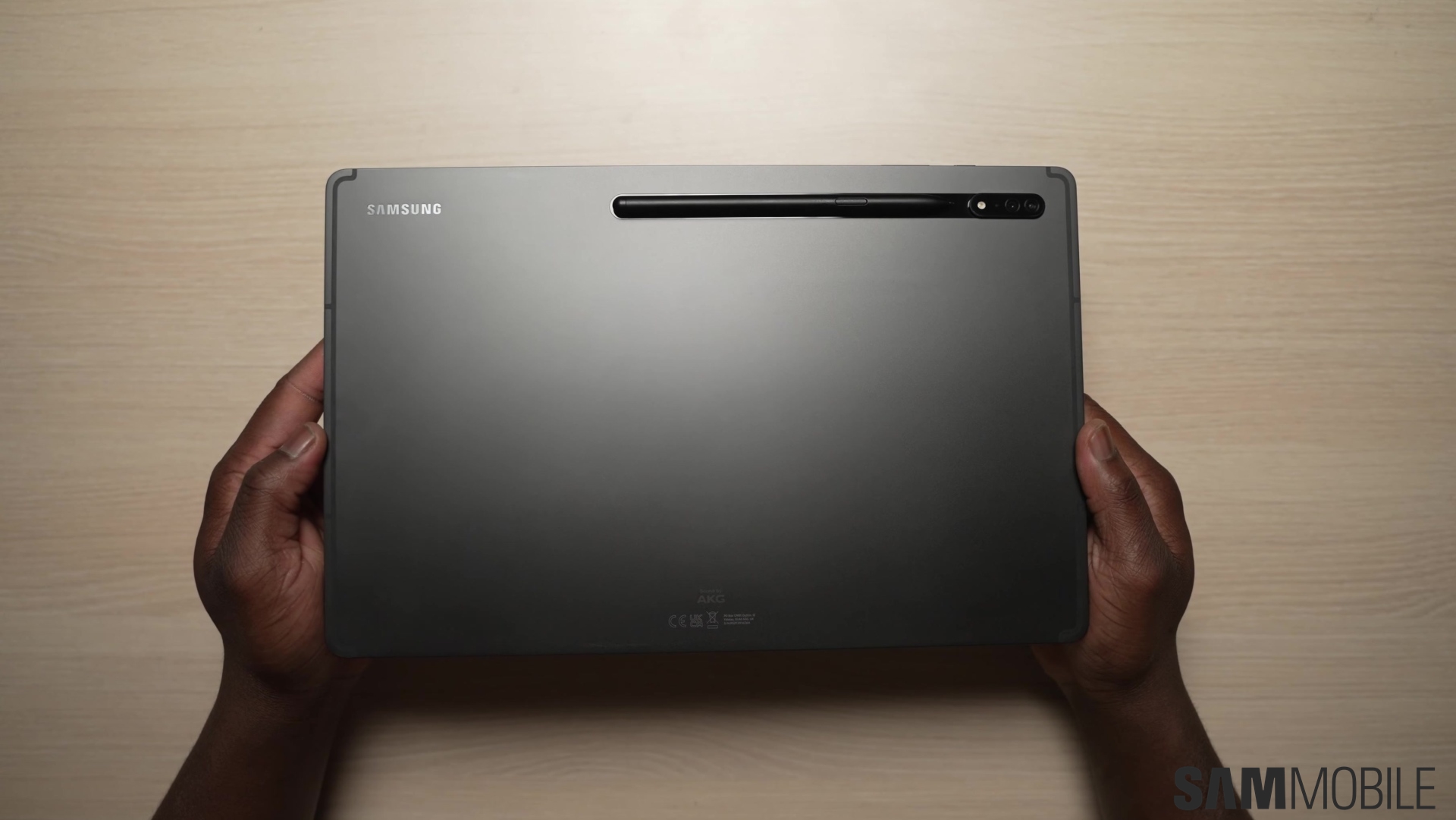 Nobody buys a tablet for its cameras. They’re just there. The Galaxy Tab S8 Ultra comes with a 13-megapixel primary sensor at the back in addition to a 6-megapixel ultra-wide sensor and an LED flash. They capture good quality shots with decent color reproduction. Don’t expect any groundbreaking low-light performance and even the ultra-wide shots feel a bit lacking. Then again, the cameras aren’t really what sells these tablets.

One unique element about the Galaxy Tab S8 Ultra is that it features two 12-megapixel front-facing cameras in the notch. These are wide and ultra-wide sensors with auto-framing technology really come in handy when you’re on a video call. It automatically pans the camera to keep you in the frame. 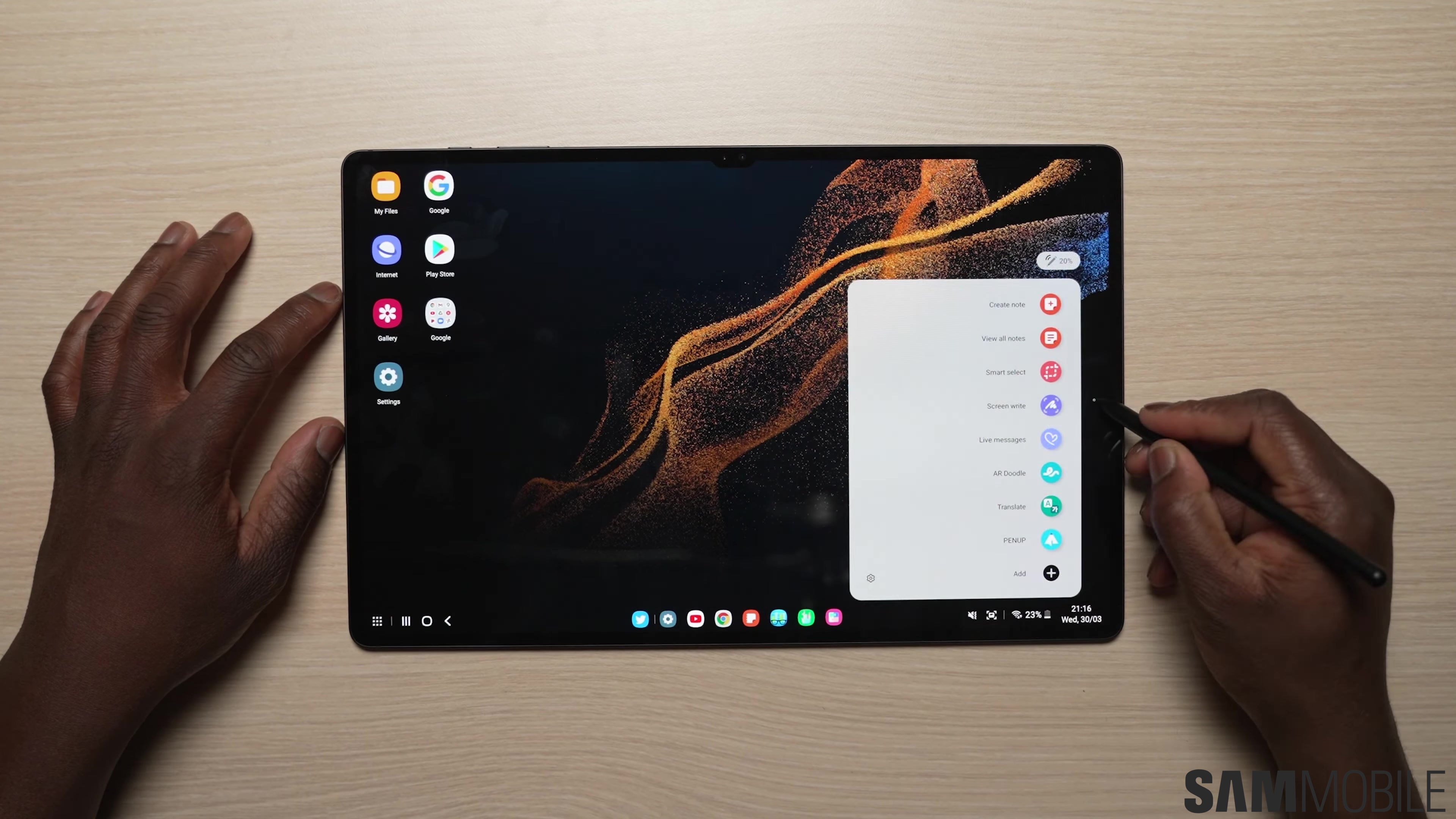 Samsung ships the Galaxy Tab S8 Ultra with Android 12 out of the box as well as One UI 4.1. Android has certain fundamental limitations on tablets and they may be resolved in due course with Android 12L, but until that happens, we must make do with what we get.

One UI is well optimized for the tablet and that makes an immense contribution to the user experience. Samsung has made improvements to its native apps to help users be more productive. Features like Multi-Active Window elevate the multi-tasking experience on this tablet.

Since Samsung envisions the Galaxy Tab S8 Ultra to be a permanent fixture in your work setup, features like Samsung Flow really help. It lets you seamlessly transfer files between the tablet and PC in addition to receiving PC notifications on the tablet and vice versa.

The Galaxy Tab S8 Ultra is guaranteed to receive four Android OS upgrades. So it remains supported until Android 16. 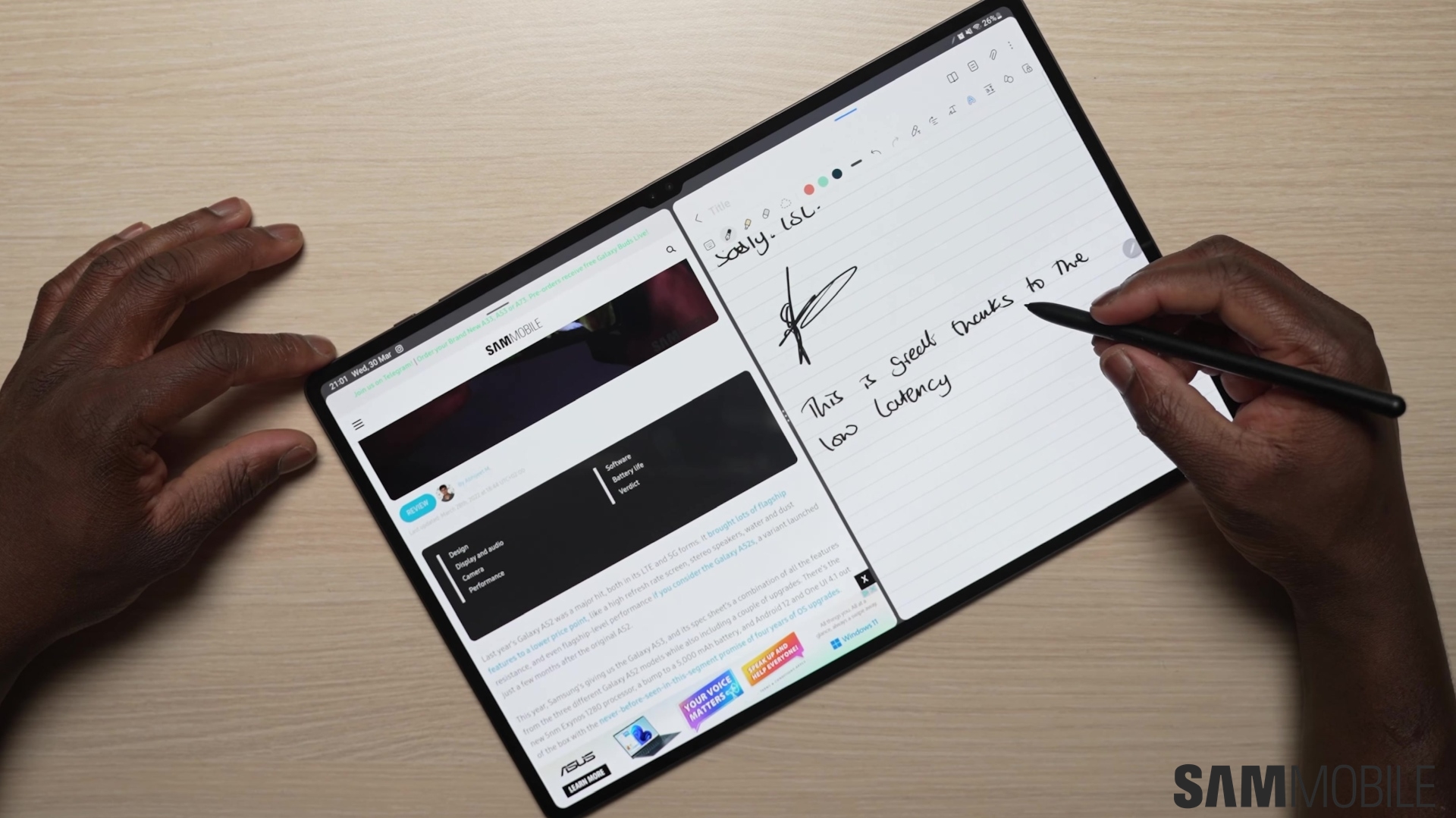 The S Pen is integral to getting the most out of the Galaxy Tab S8 Ultra. It’s great that the stylus ships with the tablet and we’re not forced to buy it separately. The S Pen feels nice and sturdy in the hand, more like a real pencil than a stylus.

The goal has always been to replicate a true pen-to-paper feel and Samsung has come quite close to achieving that. Every stroke when writing or drawing feels effortless and fluid. With Air actions, navigating through the user interface becomes a breeze as well.

What really sets the S Pen experience apart on this tablet is the screen size. With such a large canvas to work with, the only limit to what you can create with the S Pen is your imagination. 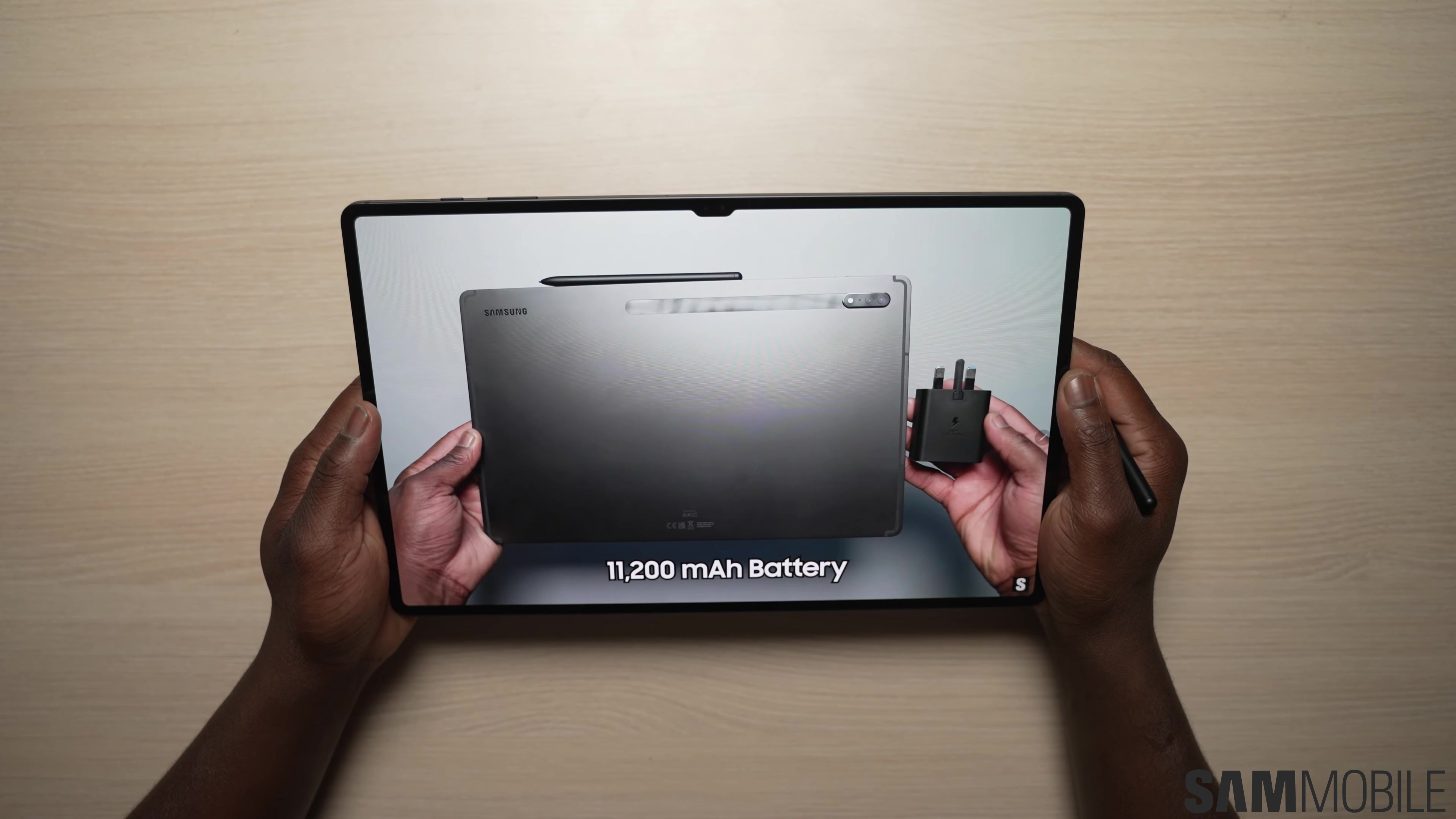 At 11,200mAh, this is the biggest battery we’ve seen on a flagship Samsung tablet. It supports 45W fast charging but you won’t find a charger in the box. We conducted a Galaxy Tab S8 Ultra charging test with the 45W charger and found that the device charges to full even faster than Samsung’s estimated time.

The battery life is not something you need to think or worry about, no matter how hard you push the device. It has more than enough longevity to get you through the workday with plenty still left for the next day. 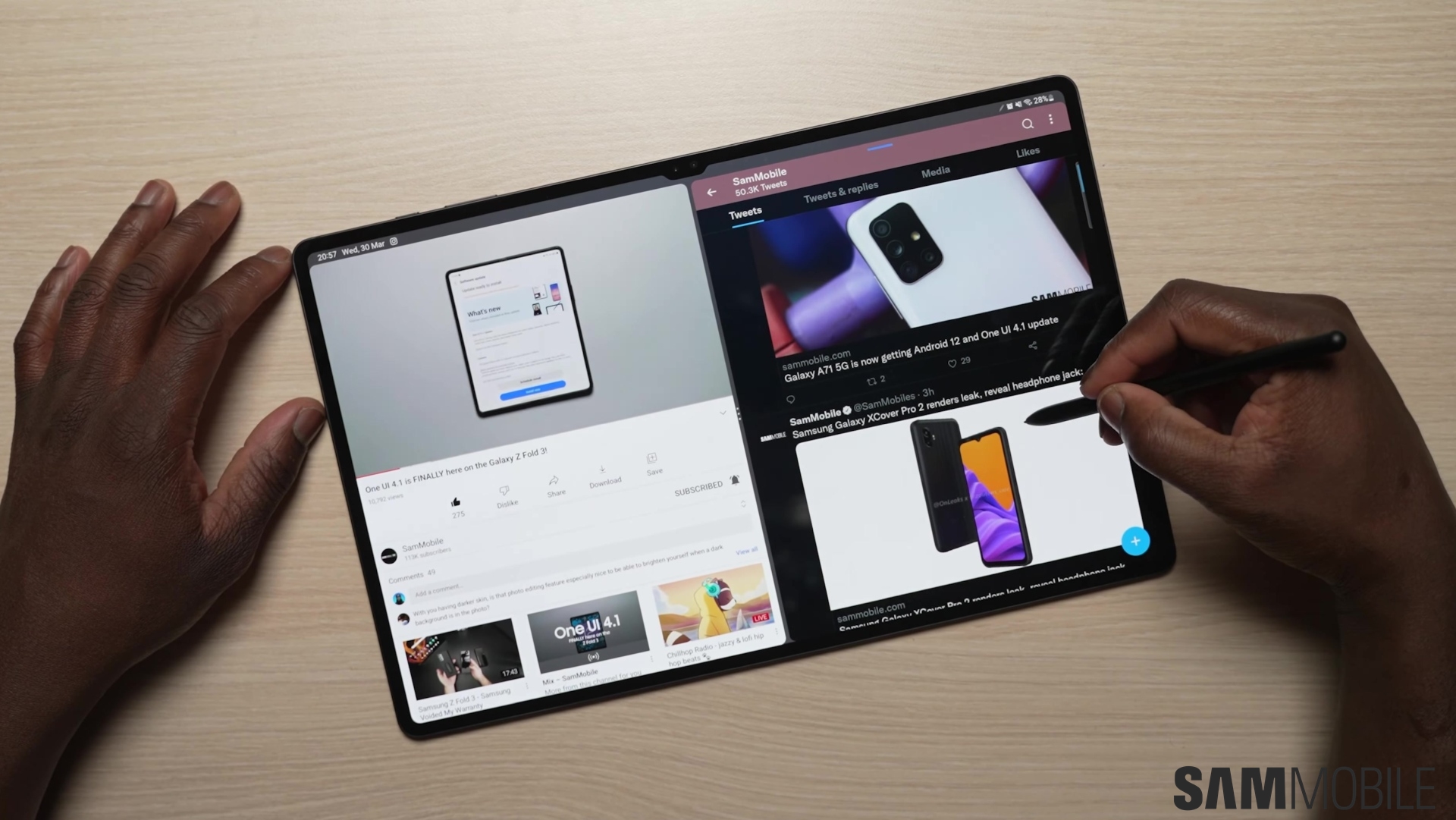 The Galaxy Tab S8 Ultra is the embodiment of what a luxurious and powerful Android tablet should be. However, you just can’t get the complete experience of all that it has to offer without the keyboard cover. The keyboard and the trackpad elevate the user experience to a whole new level, but it comes at an added cost, $349 to be precise.

There are plenty of workflows where the Galaxy Tab S8 Ultra will fit in nicely, particularly for those in creative endeavors. This could work as a laptop replacement if all that you need to use is available on the Android ecosystem but at this price, you can easily get a proper laptop and a more affordable tablet with some money still left over.

If you’re a Samsung loyalist and must absolutely have the greatest tablet the company has ever produced, a category I find myself in, then you should go ahead and buy the Galaxy Tab S8 Ultra. For everyone else, there’s the Galaxy Tab S8+ and Galaxy Tab S8.