Qualcomm teased a new chipset for smartwatches last week and delivered the punchline today. The company unveiled its new Snapdragon W5 Gen 1 and W5+ Gen 1 chipsets moments ago along with some pretty big claims.

It’s worth noting that Qualcomm’s previous platform was based on 12nm while the new generation is manufactured on a 4nm node. Therefore, these massive performance and energy efficiency gains from one generation to another seem believable. But that’s not to say the W5 Gen 1 series will be twice as powerful and efficient as the 5nm-based Exynos W920 chipset from Samsung.

A few smartwatch manufacturers are reportedly creating wearables that use Qualcomm’s new solution, but Samsung doesn’t seem to be among them. The upcoming Galaxy Watch 5 series reportedly uses Samsung’s 5nm W920 SoC.

As for Qualcomm’s latest silicon, it features four Cortex-A53 cores and one M55 core, an A702 1GHz GPU, support for LPDDR4 RAM, Bluetooth 5.3, and more modern connectivity options, all in a smaller package.

The difference between the Snapdragon W5 and W5+ is that the latter chipset has an additional low-power co-processor (the M55 core). So, what’s the point of the W5 Gen 1 chipset, you ask?

According to Qualcomm, it sounds like the Snapdragon W5 Gen 1 was designed primarily for enterprise devices, the Chinese market, and OEMs who already use a custom co-processor of their own. Qualcomm’s co-processor can do heart rate measurements, ECG and SPO2 readings, and has fall detection powered by machine learning, among other advanced features.

All things considered, compared to the Snapdragon W4100+ SoC, the new Snapdragon W5+ Gen 1 might be able to deliver up to a whole extra day of battery life on a smartwatch featuring a 600mAh battery.

The Snapdragon W5 series could be the response Wear OS smartwatch manufacturers who compete with Samsung were looking for. The W5+ SoC certainly gives them a better chance to compete against Samsung’s dominant Galaxy Watch series. 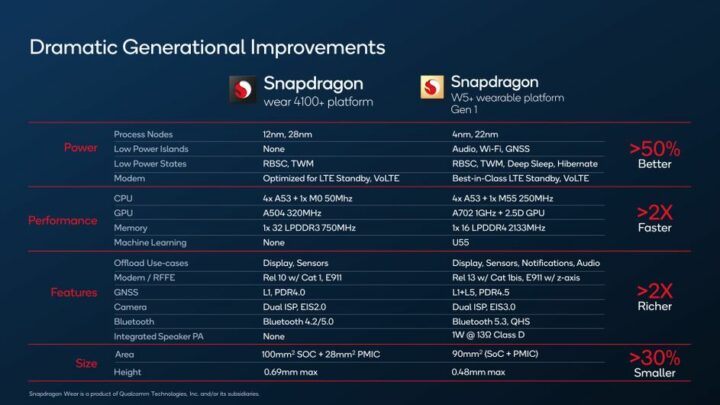