Is Samsung revamping the Galaxy J series as well?

Samsung revamped the Galaxy A series recently and the new Galaxy A8 (2018) and Galaxy A8+ (2018) handsets certainly appear to be promising. They’re the first premium mid-range smartphones from Samsung with an Infinity Display, support for the Gear VR and also the first Samsung devices with a dual front camera.

Is Samsung going to revamp the Galaxy J series as well? One can argue that it’s about time this lineup was overhauled and while some details have surfaced that might hint at this possibility, the chances of that actually happening appear slim right now.

Since the model number in these listings is SM-J720F it’s evident that this handset isn’t a US-only model. Samsung skipped a version so it can, at least in theory, use this model number for a next-generation Galaxy J handset. Perhaps it might call the revamped handset Galaxy J8 (2018) to bring the nomenclature in line with its premium mid-range offering.

The benchmark listings reveal that this handset has a 5.5 inch 1280×720 pixel resolution HD display and is powered by Samsung’s new Exynos 7885 processor with 4GB of RAM and 32 GB of storage, this is the exact same chip that powers the new Galaxy A8 and Galaxy A8+ (2018).

Now that’s a combination that doesn’t make sense particularly when you look at the Galaxy J7 Pro. Samsung doesn’t upgrade the processor and downgrade the screen resolution on a new device and since the J7 Pro has a Full HD display, this combination immediately becomes sketchy. Something’s amiss.

It would make absolutely no sense for Samsung to use the Exynos 7885 processor on a device with an HD display. We’ve already explained how the Exynos 7885 SoC is arguably the Galaxy A8 (2018)’s best feature as the significant performance improvements are much appreciated. The chip’s potential will certainly be wasted on a device like this.

That’s not all, though. The listing mentions that this device runs Oreo “Android Samsung-ss Edition” ROM. There has never been such a ROM so either it’s carrier or retailer-specific or GFXBench hasn’t got the details right. We can confirm though that we see firmware development for a device bearing model number SM-J720F so perhaps there’s more to this than meets the eye.

So what’s the deal with this listing? Well, for starters, don’t believe the simple reports based on these listings that they reveal information about a next-generation Galaxy J series handset. There are a few possibilities you have to consider aside from the fact that details on benchmark listings like these can easily be faked.

What we see here is either an early test device that we’ll end up seeing in more listings down the road with better specs or it’s a prototype for a next-gen Galaxy J series handset but the model number in the listing is incorrect.

We’re not writing off a new device completely because we see firmware development which suggests that Samsung is working on something. However, it feels unlikely that it’s going to be a complete overhaul of the Galaxy J series, even though we feel that it should happen now. 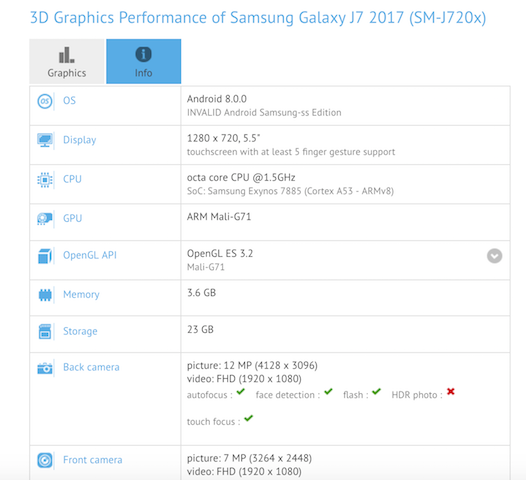