The Galaxy A02s was Samsung’s most affordable smartphone for 2021 up until the Galaxy A02 got introduced. The latter budget device was quietly revealed in Thailand this week and it will go on sale for the equivalent of $99. It’s missing the ‘s’ in the moniker, and this means it’s missing a few features as well.

Some characteristics were left unchanged but for the most part, the two devices are very different despite their similar names. What they have in common is a 6.5-inch PLS IPS display with a resolution of 1600 by 720, and standard connectivity features such as a 3.5mm headphone jack, Wi-Fi 802.11 b/g/n, and Bluetooth 5.0.

Samsung’s new budget phone relies on a MediaTek MT6739W quad-core chipset, a PowerVR GE8100 GPU, and 2GB / 3GB of RAM. It no longer uses the Qualcomm Snapdragon 450 SoC but continues to offer 32GB or 64GB of expandable storage.

The Galaxy A02 has a 5,000mAh battery, same as the A02s, but it lacks fast charging capabilities and it’s limited at 7.75W. Interestingly, the new model reverts back to microUSB instead of using a USB-C port. Given the low-end market segment to which the Galaxy A02 belongs, microUSB could actually work in its favor even if it’s an older standard.

The majority of low and mid-range Galaxy smartphones share a common front-panel design and the Galaxy A02 doesn’t take any extra steps to change that. The back panel is another story and it’s where the Galaxy A02 and Galaxy A02s really differ.

Both phones have a polycarbonate shell but the newer Galaxy A02 has a much smaller camera bump as well as a different pattern running across the back panel. 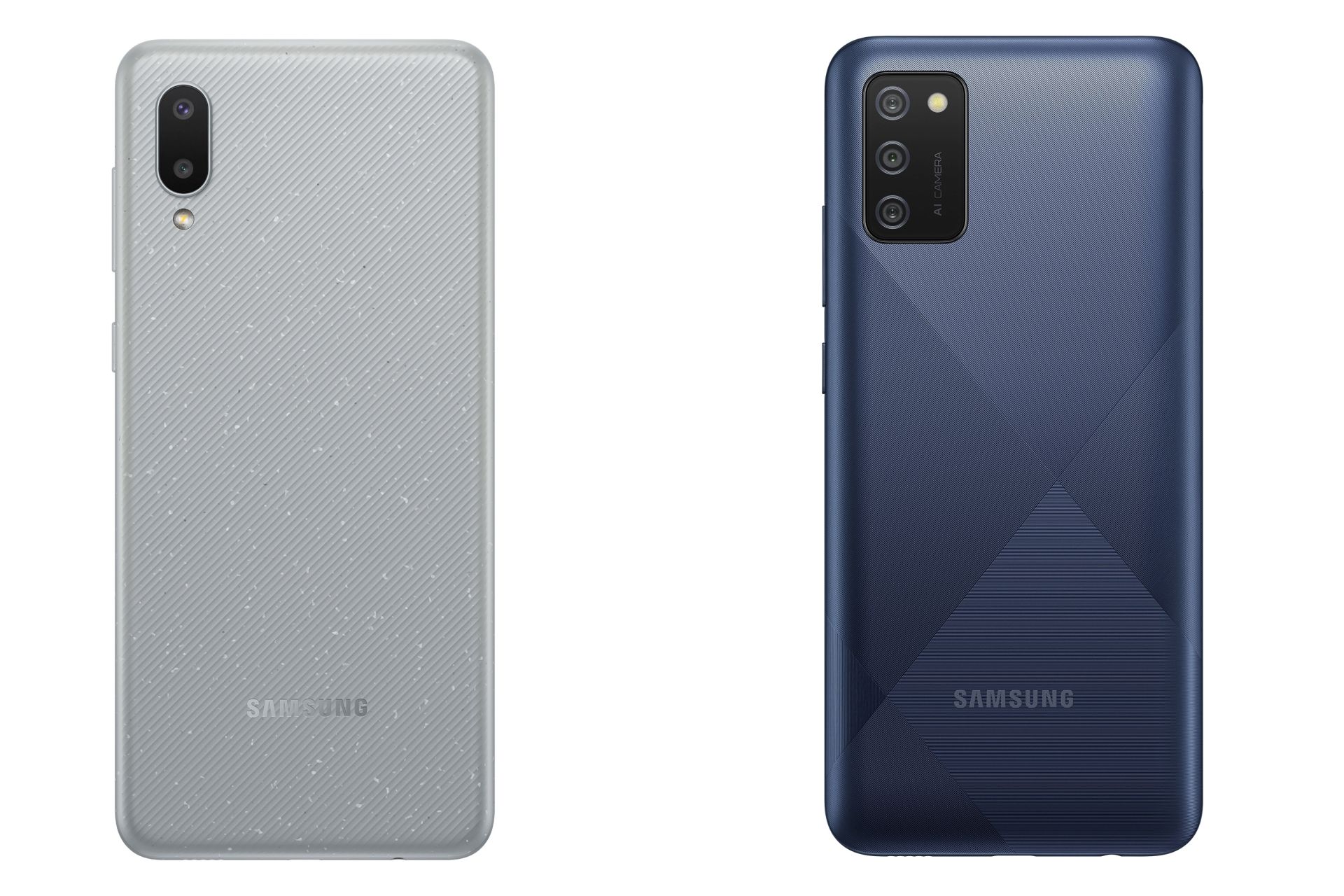 The Galaxy A02 is offered in additional color options but availability differs by market. They measure just about the same and weight around 200 grams each.

Galaxy A02 vs Galaxy A02s: Camera and other features

The camera setup that was employed by the Galaxy A02s is relatively forgettable, and you’d only set yourself up for disappointment if you’d expect more from the Galaxy A02. The device has two rear-facing cameras instead of three, lacking the depth sensor.

The remaining two — wide and macro — cameras as well as the 5MP selfie sensor have similar resolutions across both phones. They handsets also share the same versions of Android OS (10) and One UI 2, so the user experience is virtually the same, at least as far as the UI is concerned.

At the end of the day, a few extra tens of dollars can guarantee a few extra features to Galaxy A02s buyers, but it’s up to each customer to decide whether or not it’s worth it. You can check our device comparison widget below for a more detailed look at the Galaxy A02 and the Galaxy A02s side-by-side. Don’t forget to hit the Full Comparison button.

Galaxy A02
VS.
Galaxy A02s
Full comparison
Join the Discussion

More news »
Samsung’s cheapest 5G Galaxy A phones are coming to the US Adnan F.|4 weeks
Samsung is working on yet another F-branded phone: the Galaxy F02s Mihai M.|2 months
Samsung silently introduces Galaxy A02 with a 5,000mAh battery Asif S.|3 months
Galaxy A02s vs A12 vs A32 5G: An epic three-sided battle on a budget Mihai M.|3 months
SamMobile Weekly Giveaway
Best Picks More »
Best Samsung Phones in May 2021 – Picked by experts
5 days ago