We knew it would be a matter of time before the first public benchmark listing would shine a light on some of the specs of Samsung’s upcoming Galaxy S10 line-up. It is the Galaxy S10 Lite that is the first to leave its traces in Geekbench.

In the database of the Geekbench benchmark test, the guys over at GalaxyClub spotted Samsung’s SM-G970U doing its rounds with Qualcomm’s Snapdragon 855 SoC. This is the US version of the cheapest Galaxy S10 model, and it runs Android 9 Pie. So far, nothing here is in any way surprising, though we are pleased to see the device packing 6GB RAM. This is a significant upgrade from last year’s 4GB in the basic Galaxy S9 variant.

Perhaps the biggest surprise here is the performance of the device. A single-core score of 1986 and a multi-core score of 6266 are nothing to write home about. The only relevant conclusion is that the tested device was running highly unoptimized software and hardware. The achieved scores, therefore, should not be taken as an early indication of the Galaxy S10’s performance. 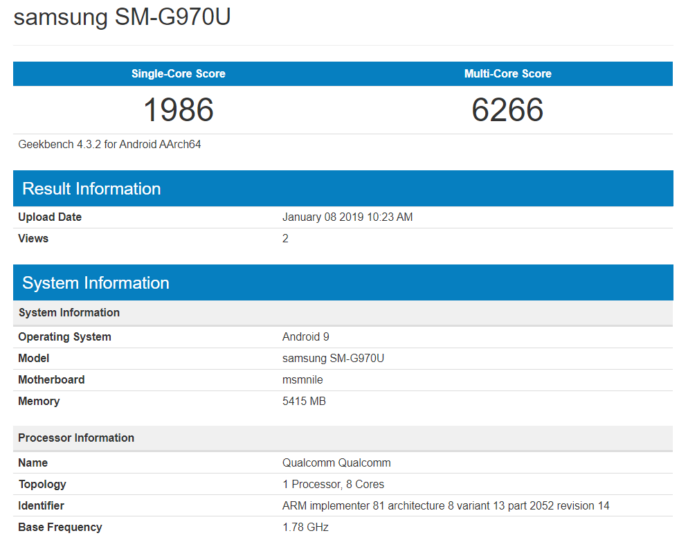 We expect the other S10-variants, possibly called the Galaxy S10 edge and the S10 Plus, to be equipped with the same processor. It remains to be seen if these devices, too, will have 6GB RAM, or if Samsung decides to put 8GB or more in its more expensive flagship models.

As far as the Galaxy S10 lite is concerned, we expect it to come with 128GB storage, a dual camera, and a fingerprint sensor that is integrated into the power-key. The device will have a 3100mAh battery that should at least make it last through a long working day.

Samsung is expected to launch the Galaxy S10 in the days prior to this year’s Mobile World Congress, perhaps around February 20. The actual release will then follow in early March. A fourth S10 variant with 5G with likely be released later this year, on several US carriers, and in South Korea.