Galaxy A5 and A7 (2016) receive June security patch in India

If you own the Galaxy A5 (2016) or Galaxy A7 (2016) in India, then keep your eyes peeled for an update notification. Samsung has started rolling out the June security patch for the handsets in India. The changelog also mentions that the update includes a patch for a “critical security vulnerability.”

The update itself weighs just under 40MB which means that it doesn’t bring any new features for the devices. Not like they were expected, given that both devices are already running on Android 7.0 Nougat, which is the latest and greatest iteration of the Android operating system.

The security patch for the month of June 2017 features 96 fixes for Common Vulnerabilities and Exposures (CVE) in the Android operating system aside from fixes for 23 vulnerabilities in Samsung’s software.

Since the latest firmware release brings updates to the security policy, users will not be able to downgrade to the old software once they’ve upgraded their device to this firmware version. Other than the security patches, the latest update also brings the usual overall device performance improvements as well.

The June security patch for the Galaxy A5 (2016) and Galaxy A7 (2016) is now being rolled out in India. Those who haven’t received an update notification already should expect to do so in the near future. 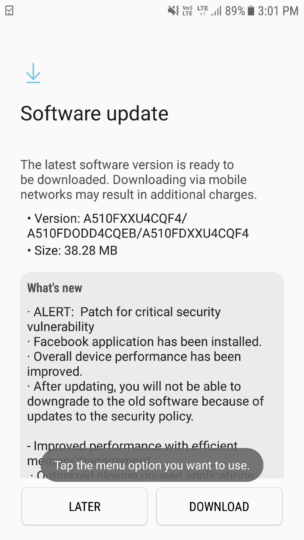