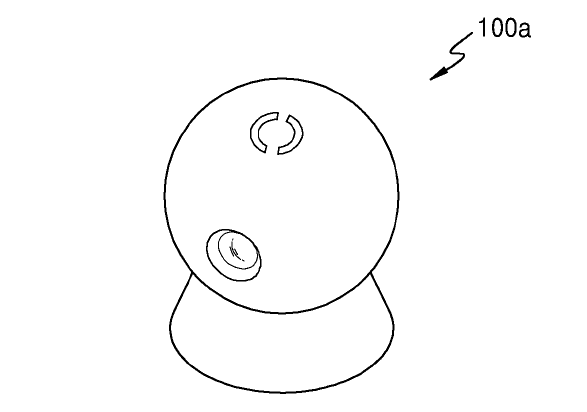 A recently published South-Korean patent application reveals that Samsung could be working on a compact projector that resembles the Gear 360. Samsung is slowly but steadily working on expanding its Gear line-up. A possible addition to the series is a device pictured in a patent application published today. We see a compact, round body that houses a small beamer. According to the document, it can be used on surfaces like a table or a wall, but also on the windshield of a car.

Also, it is possible to combine multiple devices in order to project one larger image. These devices can be controlled from, obviously, a single smartphone or tablet, but multiple linked devices can also be managed using multiple phones. Samsung even envisions such a beamer being equipped with a small camera and an infrared sensor for the detection of hand or pen movement. This more or less turns the projection into a gesture-based interface.

Of course, as is so often the case with patent applications, the ideas showcased here are not necessarily close to being turned into an actual product. Though published today, the original application was filed back in April 2015. While we could imagine a device like this fitting neatly into the existing Gear product series, there are no indications of such a ‘Gear Projector’ becoming commercially available anytime soon.