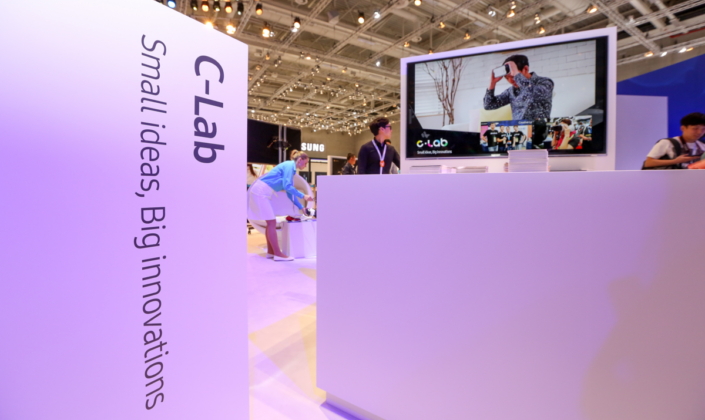 Samsung’s Creative Lab (C-Lab) innovation program was introduced last year. Through this program Samsung allows its employees to develop their own business ideas and it gives them the time and resources they need to develop that idea into a product. Just three months ago Samsung announced that 18 employees who were working on a total of five C-Labs projects officially resigned from Samsung to create proper companies based on the ideas they started working on in the C-Lab.

Samsung used the IFA 2016 stage to showcase some of the projects that are part of the C-Lab. MOPIC is one of them. It eliminates the need to use 3D glasses when viewing 3D video. With a simple device that attaches to a phone like a protective case does it enables 3D viewing on the mobile device without requiring glasses.

Prinker is another one. It’s a 3D printer that’s capable of printing on human skin. Users can select the design they want to print from the Prinker Online Art Gallery or create their own using the Galaxy Note 5 or Galaxy Note 7. This wireless mobile printer will then transfer that design to the skin through direct contact. It uses a safe, non-toxic ink which is water resistant and can last on the skin for up to two days.

Samsung first showcased the Entrim4D project at its developer conference earlier this year. It’s a new take on virtual reality which adds another layer of reality to the experience. Entrim4D uses a conventional VR headset like the Gear VR while the headphones work with a combination of algorithms and Galvanic Vestibular Stimulation to send electric signals to a nerve in the ear. It basically tricks the part of the ear which regulates balance and motion, thus providing an even more immersive VR experience.

Sgnl is a new C-Lab project. It’s a smart strap which lets users easily answer phone calls with their fingertip. They just need to place their fingertip to their ear as they speak using an embedded microphone. This enables them to keep their phone secure in the pocket or bag where it’s out of sight and can continue taking calls. Sgnl is a Kickstarter project now seeking to raise $50,000 to go into production. It has already raised $332,091 with 33 days still to go.

WELT is a C-Lab project that has been previously showcased as well. It’s a smart belt which measures the waistline and sends alerts when the user overeats. It also has additional activity tracking and fitness features and comes in fashionable designs for both men and women. It has also been launched as a Kickstarter project that seeks to raise $30,000. It’s just $6,000 short of the goal and still has 31 days to go before the crowdfunding campaign ends.

Check out Samsung’s SelfieType virtual keyboard in action ahead …