We exclusively confirmed earlier this year that Samsung was working on the Galaxy S5 Zoom (SM-C115), and now, the specs of the company’s second-generation phone-cum-camera device have been revealed through benchmark site GFXBench. The Galaxy S5 Zoom will sport a 19-megapixel main camera according to the benchmark, a noticeable upgrade over the 16MP sensor on the Galaxy S4 zoom, though the benchmark doesn’t mention its optical zoom capability (the S4 zoom had 10x optical zoom). There will also be a front camera, though this will be a standard 2-megapixel sensor.

The Galaxy S5 zoom will have a 4.8-inch 720p display (Super AMOLED), and is powered by Samsung’s new hexa-core Exynos chipset that debuted on the Galaxy Note 3 Neo – the benchmark lists a clock speed of 1.3GHz, though this is likely the frequency four low-power Cortex-A7 cores and not the two high-performance Cortex-A15 cores, which should be clocked at 1.7GHz unless Samsung has decided to lower the clock speed for some reason. Other specs include 2GB of RAM, 16GB of storage and NFC connectivity, and Android 4.4.2 on the software side of things.

The Galaxy S4 zoom wasn’t a very impressive device in terms of its hardware specs, but it looks like Samsung has addressed that with the S5 zoom, in addition to increasing the megapixel count on the camera (hopefully, image quality has been improved as well) – the display has a higher resolution, there’s more on-board storage, and it’s using one of Samsung’s latest processors. The Galaxy S5 zoom is expected to be unveiled sometime in May, and we’ll be sure to let you know about any other details that might surface in the days to come. 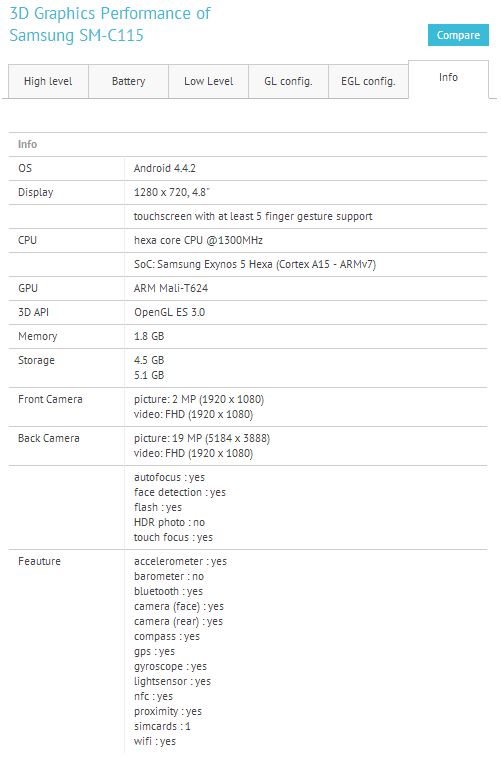 Galaxy S5 Zoom will be called the Galaxy K, official announcement on A …

It was indicated earlier this month that Samsung’s camera-centric model would be called the Galaxy K. It loo …

We’ve been hearing about the Galaxy S5 zoom quite often in the last few weeks, and now a leaked image cl …

We exclusively confirmed earlier this year that Samsung is working on the Galaxy S5 zoom and Galaxy S5 mini, …

Leaks and rumors come in many forms, but today’s leak about the Galaxy S5 zoom is rather unique in that …