Galaxy S4 to be updated to Android 4.4 KitKat in Canada starting today

Another day, and another region is opening its doors for the Android 4.4.2 KitKat update for Samsung devices. Canadian carrier Rogers will begin pushing out the KitKat update to the Galaxy S4 starting today, a month after it announced the update would be released “soon.” An exact time for the rollout isn’t mentioned, but Rogers subscribers should start seeing a notification for the update as the hours go by, though the update will take its usual course of a few days to reach every user.

Rogers also mentions that the Galaxy Note 3 will be getting KitKat sometime in late March, and we’re guessing other Canadian carriers will also have something to announce by then. In the meantime, keep your Galaxy S4 connected to the internet so that you don’t miss that highly anticipated update notification, and do let us know in the comments if you’ve already gotten it on your Galaxy S4.

Update: The update is now live, and is sized at around 414.46MB. If you haven’t received it yet, be sure to do a manual check from the Settings » General » About phone » Software updates menu. 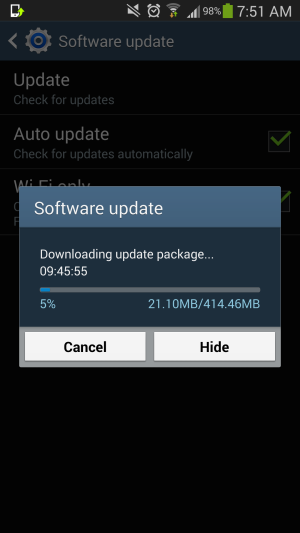