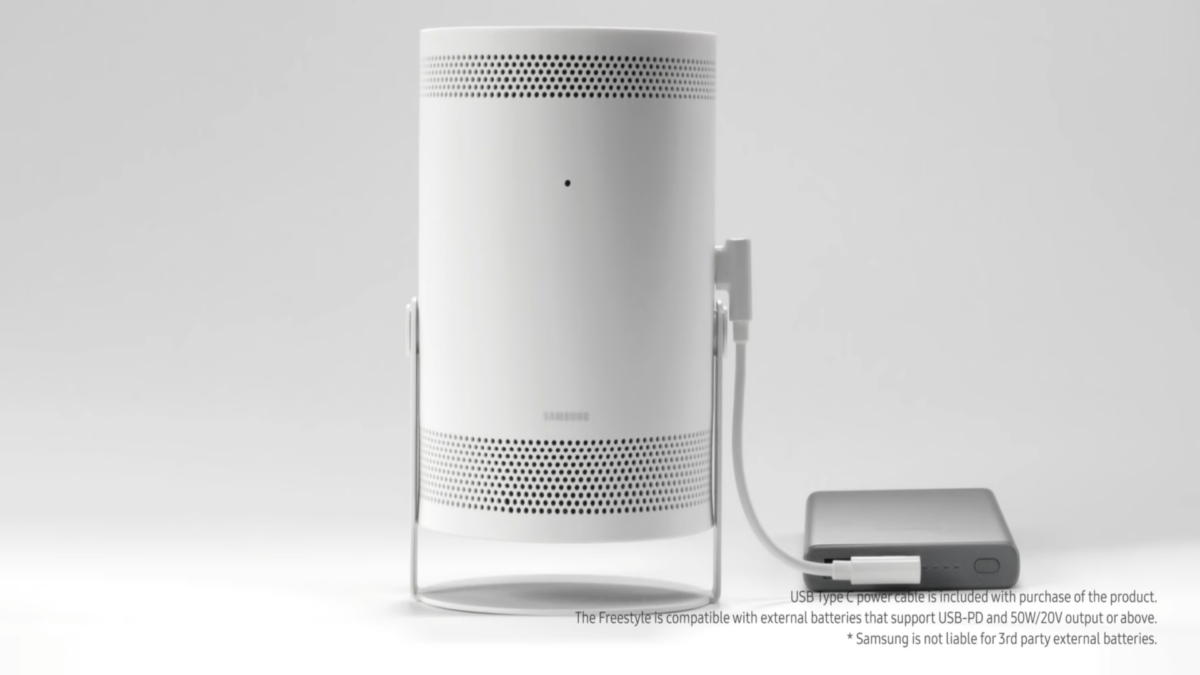 Samsung unveiled The Freestyle at CES 2022 yesterday. The smart speaker-projector hybrid is pitched as a one-stop portable entertainment solution that can also double up as a productivity enhancer. Samsung has now put out a video showcasing The Freestyle’s multiple features. It also highlights a major shortcoming, which will be addressed later in the post.

The video starts off by showcasing The Freestyle’s 180-degree hinge and the modes that one can operate the projector in. There’s mood lighting, a neon sign mode, pre-rendered scenes and one can browse through their photo gallery. It is followed by a demonstration of its variable picture size, which ranges between 30 inches and 100 inches.

The Freestyle comes with an in-built colour calibrating algorithm

One can also scale/move The Freestyle’s video output as per their wall alignment. Samsung claims that one can project content onto walls of any colour (not just white), and that the projector will automatically caliberate the feed accordingly. That is quite a hefty claim to make, and it’ll be interesting to see how it pans out in the real world.

The Freestyle also doubles up as a fully-functional smart TV, complete with an operational operating system pre-loaded with popular OTT apps such as Netflix and Amazon Prime Video. One can also use it to mirror the content played on a nearby TV, although it doesn’t tell us how the projector interfaces with the said TV. In all likelihood, the feature is exclusive only to Samsung-branded televisions.

On top of being a projector and a smart speaker, The Freestyle can also act as a light source. All one needs to do is put on a lens cap and plug it into a standard E26 light fixture, where it will draw power from the AC inlet. The functionality is available only in the United States. A global rollout will be a colossal pain, given the disparity in the input voltage/bulb socket standards across regions.

Samsung claims that one can carry The Freestyle around to parties and outdoor occasions. However, it does not come with an internal battery, meaning that you have to rely on a power bank/wall socket at all times, even indoors. Alternatively, one can pair with USB-PD compatible batteries that are rated for 50W/20V, which have to be purchased separately.

The rationale behind leaving out batteries on The Freestyle is understandable. Projectors can be quite power hungry, and the addition of a battery could significantly increase its weight. However, that makes Samsung’s claims about its portability look exxagerated. Nonetheless, it is quite an interesting product, and we can’t wait to test it out when it drops later this year.

At the Consumer Electronics Show 2022 back in January, Samsung unveiled the Odyssey Neo G8. This is the world& …

Samsung announced that it has bagged 71 awards at the iF Design Awards 2022, an international design competiti …

Samsung’s portable projector, The Freestyle, is so tempting!

Earlier this year, Samsung had unveiled its first portable projector, The Freestyle. A few days ago, the compa …