A series of reports emerged online today citing 91mobiles and claiming that Samsung is working on a new entry-level Galaxy A smartphone identified by the model number SM-A015F. This is not to be confused with the SM-A105F model number which belongs to the Galaxy A10.

The report goes on to mention that the mysterious device will be cheaper than the Galaxy A10 and hit the shelves under the name of “Galaxy A5.” This wouldn’t make much sense considering how Samsung switched this year’s Galaxy A (2019) series to a double-digit naming scheme.

Don’t get too excited, this might not be a real device

According to the report that cites “a trusted source,” the SM-A015F will be equipped with a 5.7-inch Infinity-V or Infinity-U display and sport only 16GB of internal storage. The device would be a true budget entry designed to compete with the most affordable phones on the market.

With all said and done, it’s time for a reality check so the big question now is whether the SM-A015F is real. Well, it seems like it is, but it might not be a device meant for the consumer market. We’ve spotted the SM-A015F in Geekbench where it’s been labeled as a Qualcomm reference phone running on an 8-core processor clocked at 2.02GHz, 2GB of RAM, and Android 10. 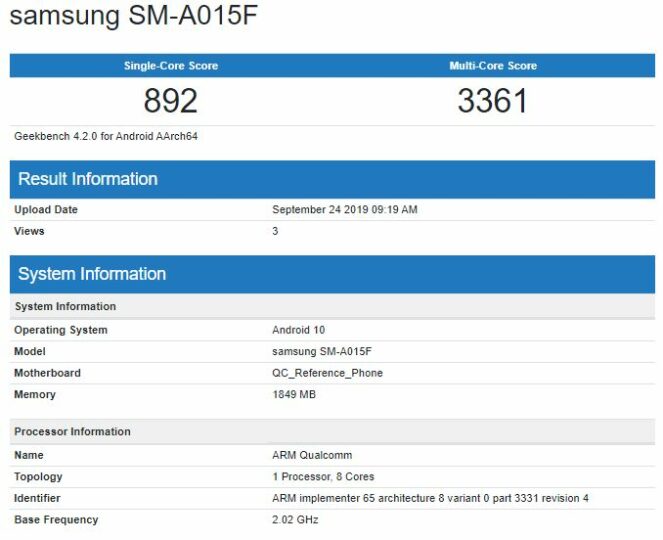 This technically means the SM-A015F is a prototype/pre-production device used by Qualcomm to test its hardware. It’s not meant as a consumer device but, instead, it’s being used by the chipmaker as a testing platform. At the most, the SM-A015F’s entry in Geekbench suggests Qualcomm might be working on a new entry-level/mid-range Snapdragon chipset which could be employed by some of Samsung’s upcoming Galaxy A (2020) smartphones.

Don’t hold your breath about the SM-A015F becoming Samsung’s next budget phone. Right now, all evidence indicates this might be just a testing platform for Qualcomm, but things can change so we’ll keep an ear to the ground. We’ll keep you up to speed as soon as we find out more.