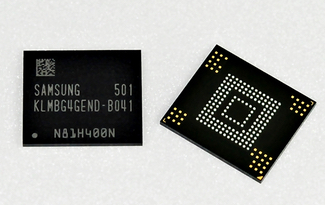 With all the discussion surrounding Samsung’s Galaxy S6 and S6 edge design and TouchWiz de-bloating, it’d be easy to believe that Samsung’s latest is simply catching up to the level of other Android OEMs. While Samsung’s design may have been a little behind the times in the eyes of some Android consumers, Samsung’s latest has some other tricks up its sleeve. Alongside of increasing the devices’ memory storage from 16GB to 32GB (minimum), Samsung has also increased the memory speeds of these two devices to levels we’ve never seen.

Memory speeds come in handy when trying to download large files, store large files, or access documents, music, and photos. And with data files growing larger and larger every day, whether for work or leisure, the need for fast uploads, downloads, and access is ever before us.

Tech site PhoneArena tested the Galaxy S6 and S6 edge’s UFS 2.0 technology by way of memory speed source AndroBench to see if there was more to Samsung’s hype than just smoke. Sure enough, the scores don’t lie: Samsung’s UFS 2.0 memory speeds in the Galaxy S6 and S6 edge are so far ahead of its Android rivals that the Korean manufacturer has no equal in the Android space. No. Android. Equal.

Just how far ahead are Samsung’s latest devices? You’ll have to see it to believe it, so go ahead and hit the source link for all the details.