Seen anyone buying a clamshell phone lately? No? Well, that is probably the reason why Samsung is choosing China yet again for its newest clamshell smartphone powered by Android, as that is apparently where the form factor is still popular. The Samsung SM-G9098 has been listed on the company’s official Chinese website, and is a dual SIM phone with two 3.7-inch Super AMOLED displays of WVGA (480×800) resolution, one on the back and one on the inside, with the latter accompanied by a traditional keypad. That’s a similar setup to what we saw on last year’s Galaxy Golden, though the design has been upgraded to be more stylish, with a faux leather texture on the back.

Other specs of the SM-G9098 are right up there with high-end Samsung handsets from 2013, including a 2.3GHz quad-core processor (likely a Snapdragon 800), 2GB of RAM, 13-megapixel rear camera, 2-megapixel front-facing camera, microSD slot, and a 1,900 mAh battery. The version of Android it is running isn’t mentioned, though the screenshots confirm that it is not Android 4.4 KitKat – Google’s rules make it compulsory to have KitKat installed on all devices launched after March, but it’s clear to see that those rules aren’t being followed in China, a country that has been rather hostile to Google services.

The SM-G9098 will be exclusive to carrier China Mobile and sell for an unknown price, with no guarantee of a launch in other countries. 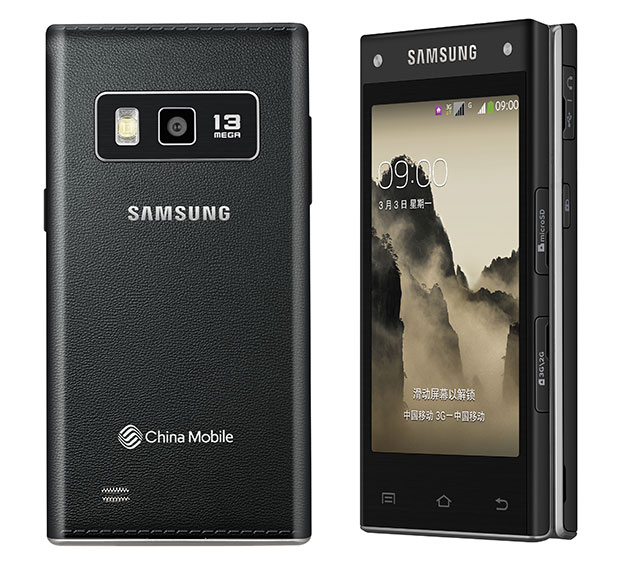