As we mentioned earlier in our introduction that the new Galaxy Note 10.1 is a lot smaller so it has become more manageable. This is mainly because Samsung has moved the speakers to the side of the tablet, these were formerly on the front which means that tablet was wider. Simultaneously this also has a disadvantage, where the sound first came towards you, now it goes sideways. Just like with the Galaxy Note 8.0 Samsung has chosen for those physical home/touch buttons, this does not ensure that it will look better, but however it works nice. The keys do have the same function just like Samsung has done with its smartphones. Samsung has the back of the Galaxy Note 10.1 2014 edition in style of the Galaxy Note 3, which means a faux leather plastic back, which results is a good firm grip. 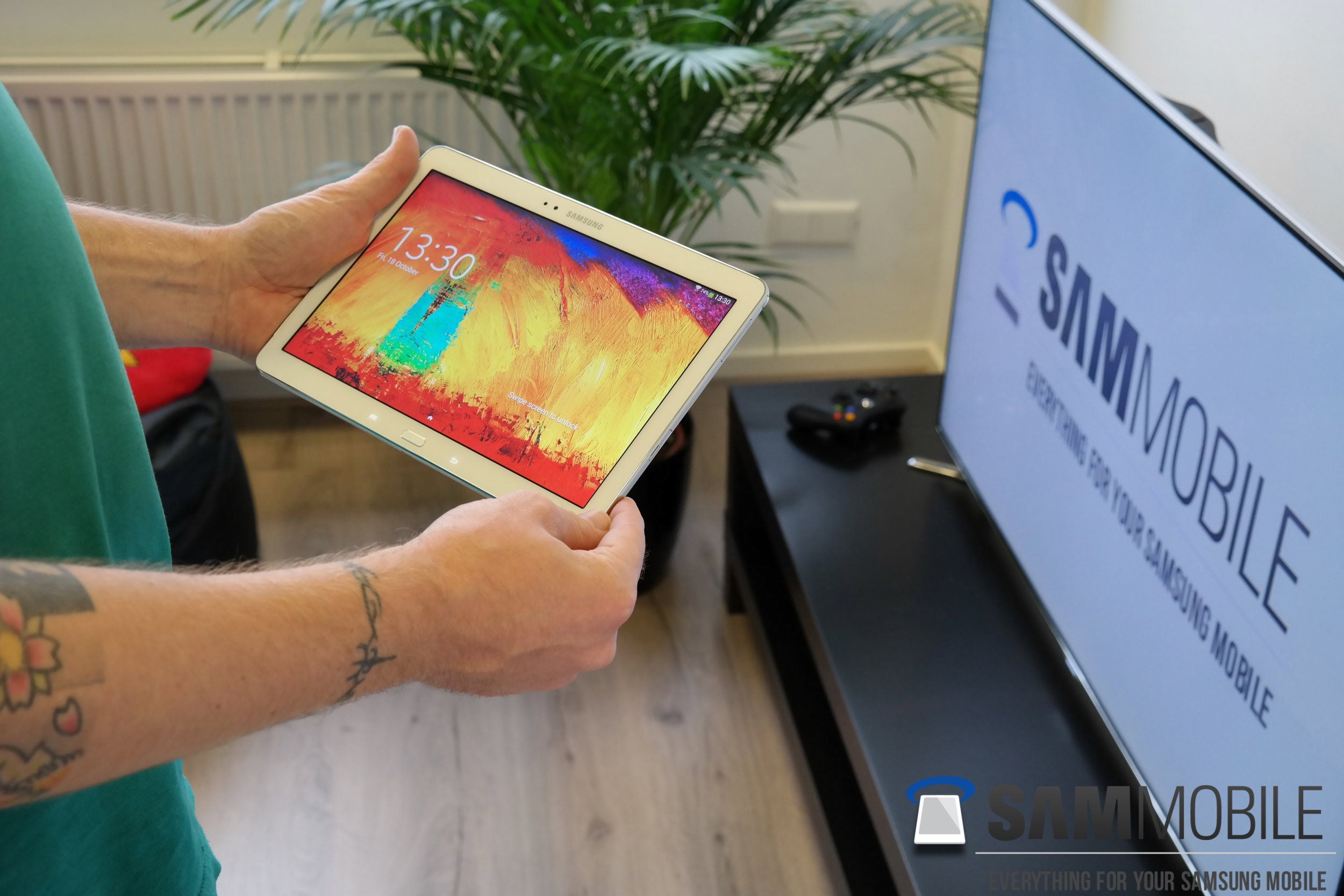 The first generation of the Galaxy Note 10.1 tablet was more or less a big disappointment in terms of screen resolution. The 10.1 ” screen had a resolution of 1280 x 800 ( WXGA ) which was at that time already very low. The pixel density at that time was only 149ppi. This means that you could see the pixels with your naked eye.
Fortunately, the Samsung Galaxy Note 10.1 2014 edition has remedied this. The screen size has remained the same, but the resolution has been increased to 2560 X 1600 ( WQXGA ) where the pixel density is 299ppi which means that the pixels aren’t visible wich results in an extra sharp look. Yet it is a pitty that Samsung has been waiting for a worthy successor to its tablets in terms of screen resolution for so long. Samsung’s Super Clear LCD ensures, however, that the display looks sharp and very natural. This course is very nice to look at. We ourselves are OLED fans and eagerly await a 10.1 ” OLED display tablet, which is expected to see the day of light on of these months now. All in all, the screen of the Galaxy Note 10.1 2014 edition is a beauty where everything looks sharp, has vivid colors and the brightness sensor of the tablet works very well which results perfect viewing in direct sunlight.

As usual, Samsung has chosen to pour their own Touch Wiz interface on its tablets. This tablet interface seems dull but is very good to use, everything is neatly organized because Touchwizz on a tablet is the same as any smart phone from Samsung.

The Galaxy Note 10.1 2014 edition sports the same interface as the Galaxy ‘s TAB3, though there are a few additional settings for the S Pen. Multi Window is back and as useful as ever, and the usual features like Smart Stay etcetera are present as well.
If anything can be criticized, it’s the fact that Samsung still uses tabs to separate the settings department and we can’t swipe through them. Instead, you’ll need to reach the top of the screen and press a particular tab which is a hassle on such big a screen and extends to apps like contacts as well. It’s an inconvenience that should not exist, and we hope Samsung stops making changes just for the sake of change. Unfortunately, not all smart functions are working well. All in all, the interface is easy to use, but it needs to be updated here and there.
However, an advantage is that Samsung has chosen to run it directly on Android 4.3. 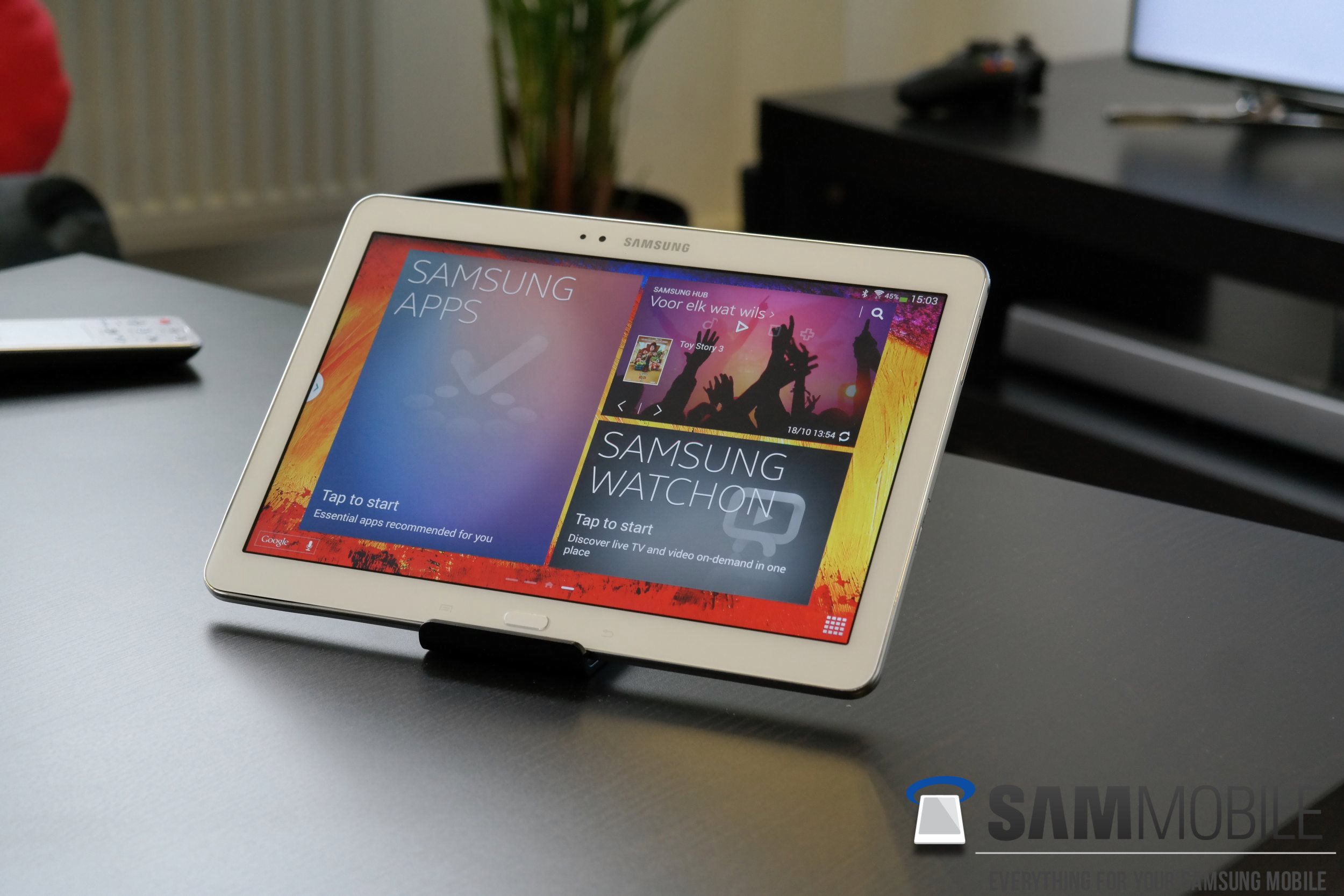 The most notable feature related to the S Pen are:
Air Command – taking out the S Pen from its holder or hovering it on top of the screen and pressing the button on it will pop up a menu with round five different options.
The five Air Command options are:
• Action Memo – quickly scribble notes and connect them to actions like saving a phone number or contact information, sending a message, searching the web or creating a task
• Scrapbooker – save anything you encounter – such as websites, maps, and pictures – organized into categories scrapbook Accompanied with notes and information for later browsing .
• Screen write – no matter where you are or what app you’re in, snap a screenshot, overlay it with your own notes and drawings, and save it for later use or share it through email, messaging, Dropbox, etc …
• S Finder – search your entire phone and the web with smart filters based on time frame, S – Pen features, tags, and more.
• Pen Window – instantly overlay a window with one of the following features: calculator, clock, YouTube, phone, contacts, hangouts, Internet, WhatsApp.
It’s a nice little feature That could come in handy for Those times you want to take a quick note or screenshot, find content on the device, or use a second app without closing your current one. Again, it’s more an evolution than a revolution , but the S Pen was already one of the best experiences stylus around, and now it’s even better than before.

We think the SPEN is especially useful for those who use it to draw on a tablet like for example an architect. 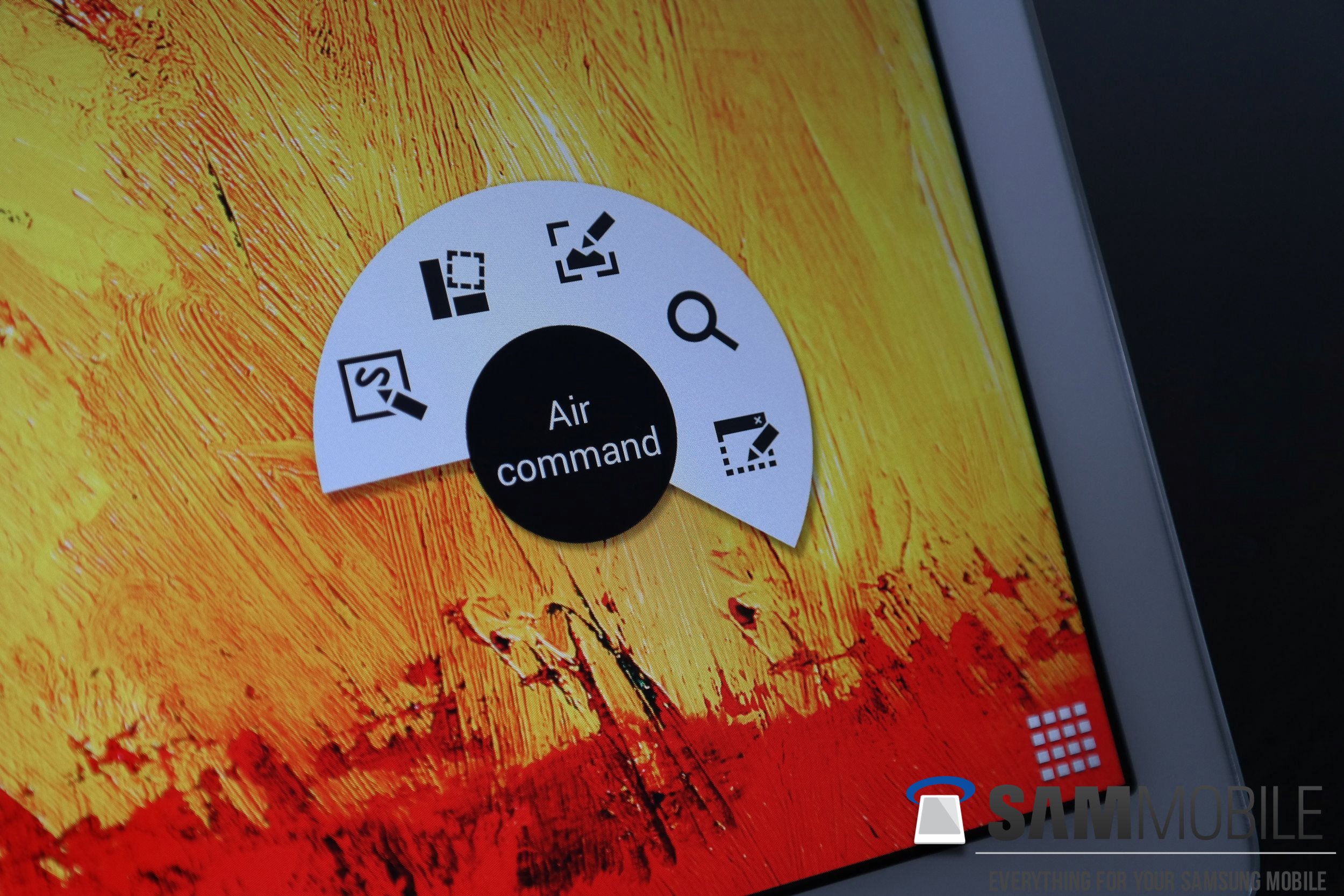 The Galaxy Note 10.1 2014 Edition uses an 8 megapixel camera on its back. The pictures can be called reasonable to good. Nevertheless, we remain at the fact that cameras are a luxury in tablets. We do not suspect that this tablet will be used to take pictures with. Especially since everyone nowadays takes pictures with his or her smartphone. Incidentally video calls via Skype is also an option thanks to the 2.1 megapixel front facing camera.

Samsung offers the Galaxy Note 10.1 2014 Edition in two editions, the WiFi only version of the 3G/4G variant. The Wi – Fi only variant uses a Octa – Core processor clocked at 1.9GHz This octa – core processor comes from Samsung itself off under its own Exynos line. For 3G/4G variant Samsung has selected Qualcomm Snapdragon 800. This processor is clocked at 2.3 GHz and can be called very reliable. This processor is because in most Galaxy Note 3 models. Speed ​​so this tablet is doing pretty well. However, we did see in our product model some lags, we suspect that this gets resolved through updates.

When you read that a product becomes smaller you assume more or less that the battery also will get smaller. However, this is not as it seems, where the first generation Note 10.1 uses a 7000mAh battery,  the 2014 edition uses a battery 8220Mah. Samsung managed to put in a bigger battery in a smaller size tablet. Hurray for that Samsung! The battery of the Galaxy Note 10.1 2014 Edition performs quite well, it lasts at least 2 days. Of course it is always difficult to predict when a battery is long enough. We could at least watch two movies,play some games and browse the Internet. Our personal conclusion on the battery Note 10.1 is just good.

If just look at the Galaxy Note 10.1 2014 edition as the successor of the first Generation Note 10.1, we simply can conclude that this tablet is certainly a worthy successor. Samsung has finally learned to improve resolution of the screen. Also, the tablet has become a lot more manageable, his allows for comfortable use of the tablet. Unfortunately, there are still no real tablet applications. However, it is good to see that Samsung is working with partners to bring them out. About its speed ​​and functionality, we simply can’t complain. The tablet is fast and can multitask very well and is really nice to use. Samsung’s own interface might be boring but works quite smoothly. Samsung’s KNOX also ensures that you can switch between business and a private set up of the device.
We are also pleased to see that Samsung has moved all the SPEN features of the Note 3 to the Galaxy Note 10.1 2014 edition. Especially for school purposes or for people who want to take notes or make drawings, this tablet is highly recommended! Yet, we do not think that this tablet will be sold very much. Personally we find this tablet too expensive and Samsung itself has no high expectations of this tablet. Samsung’s tablet specifically as previously mentioned for study purposes.

In short, the Galaxy Note 10.1 in 2014 is a tablet specifications beast that really has everything a tablet can ask for. A super sharp screen, it works smoothly and its SPEN clearly provides something extra. Which you definitely pay a little extra for, just maybe a little too much extra if you ask us. 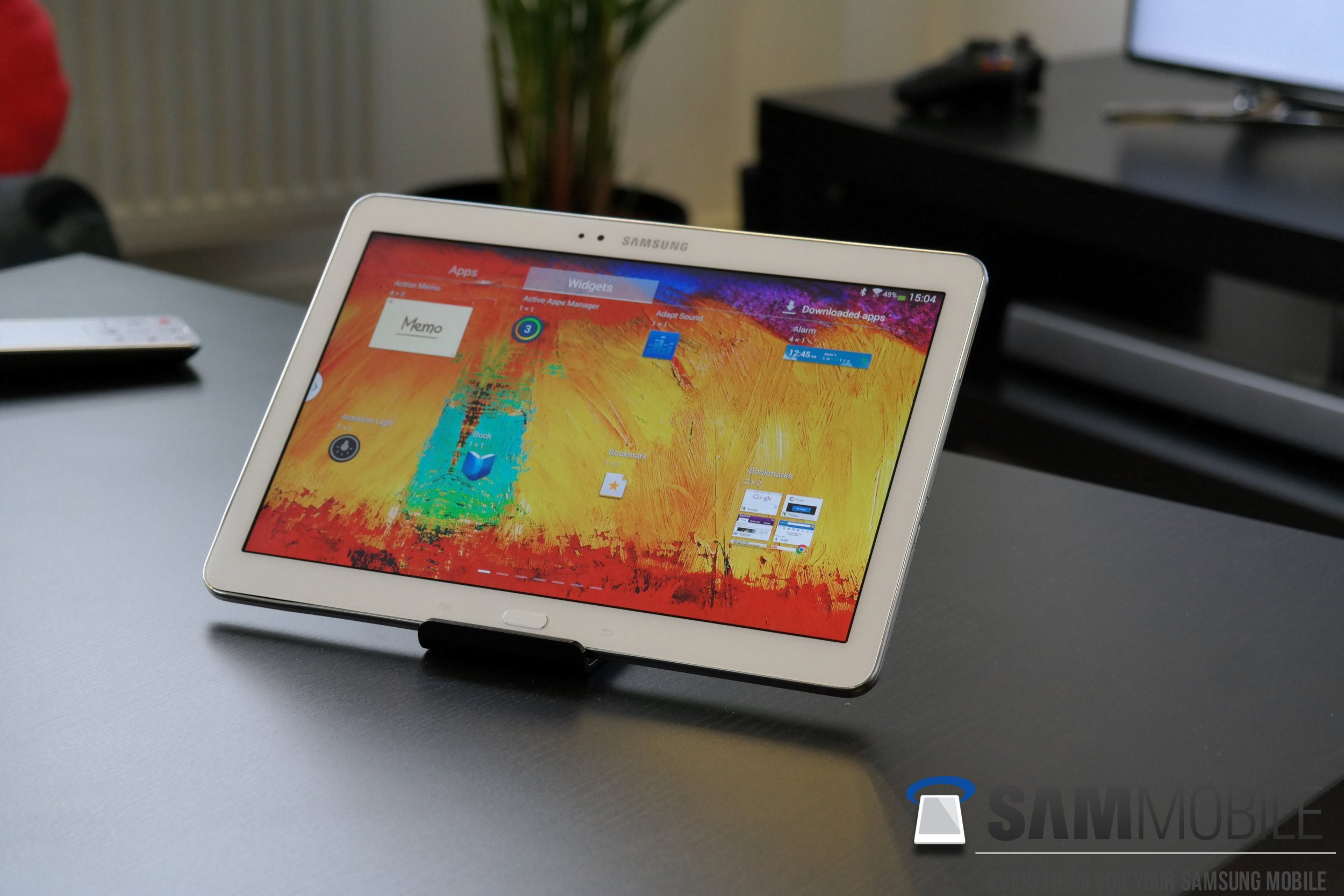 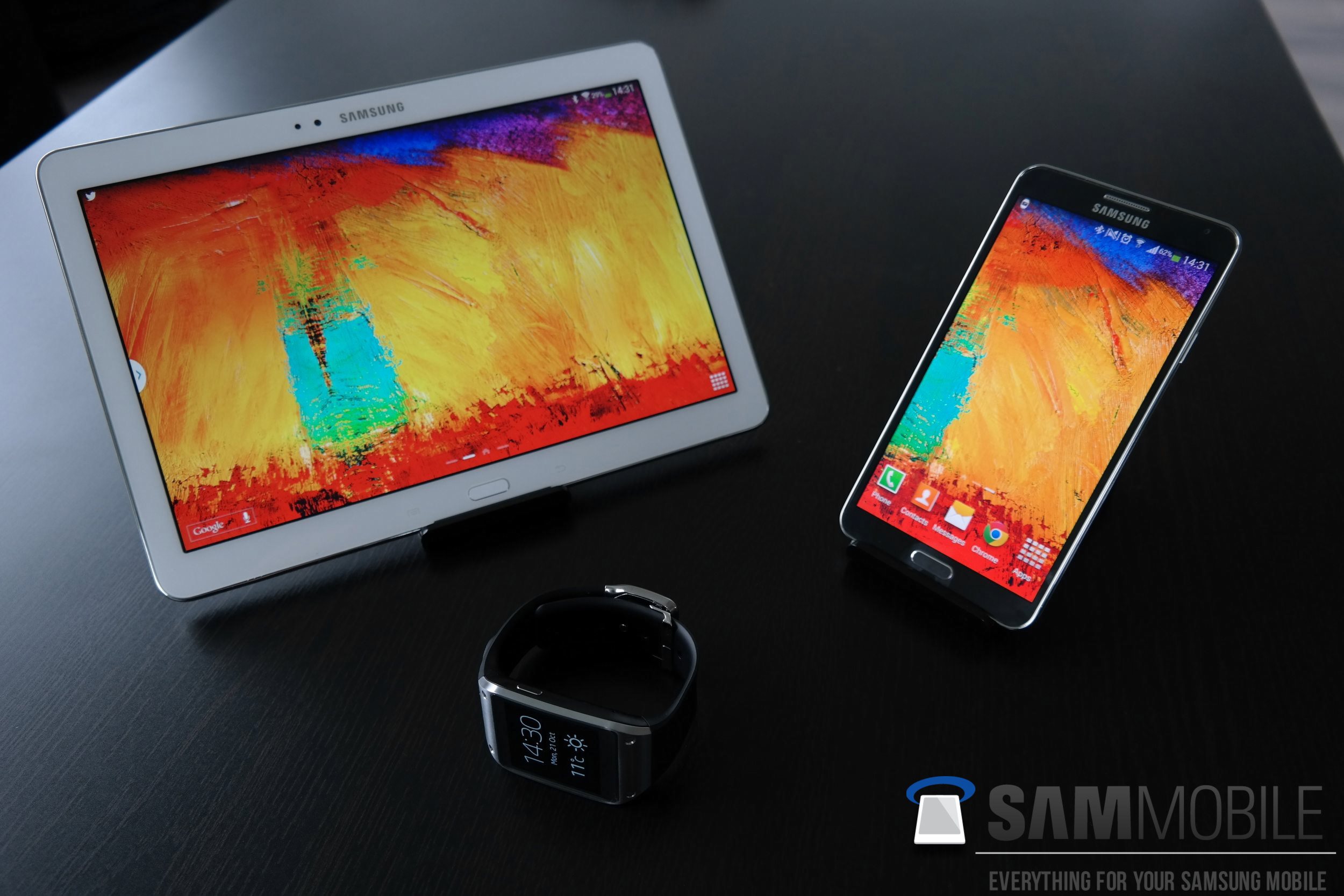 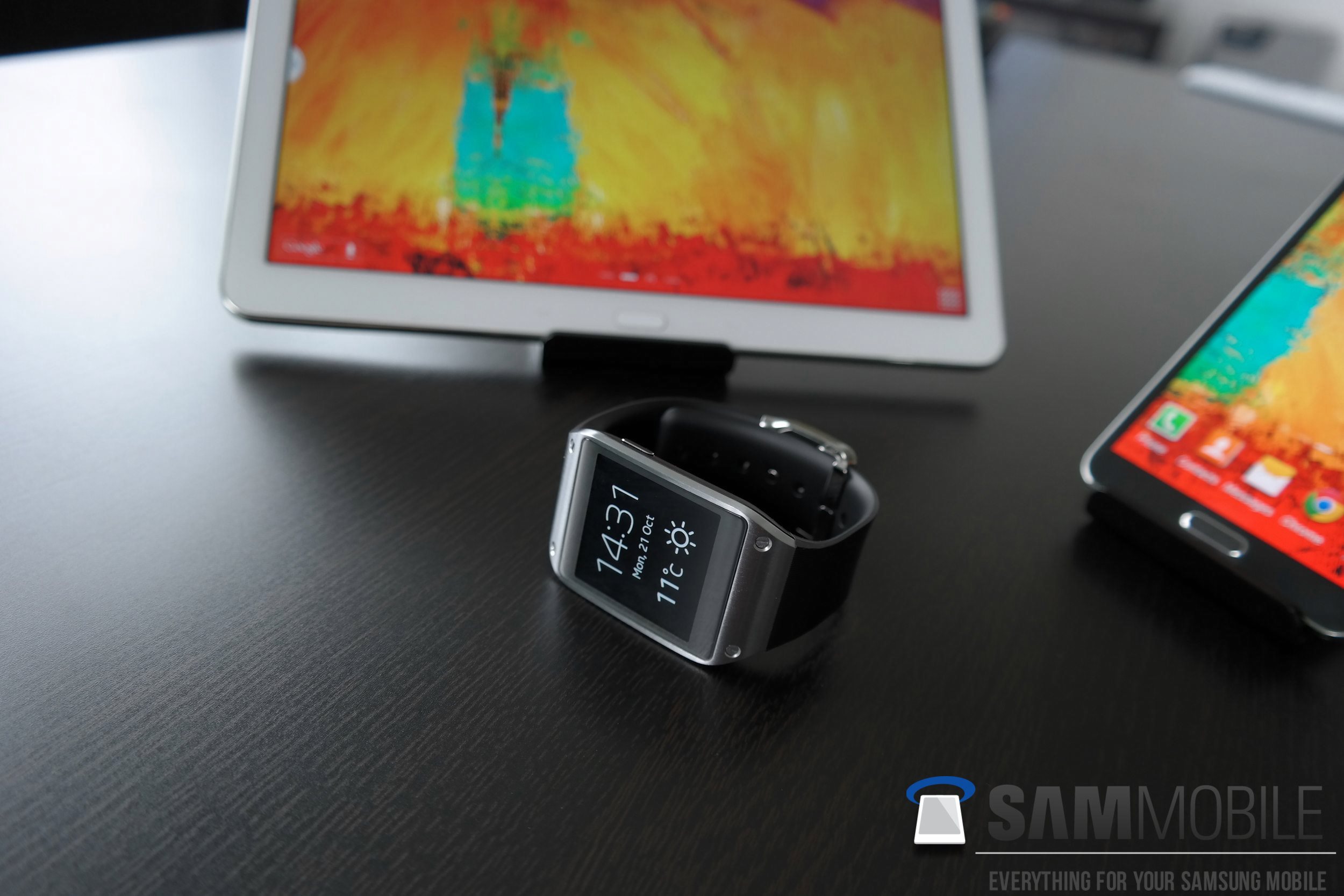 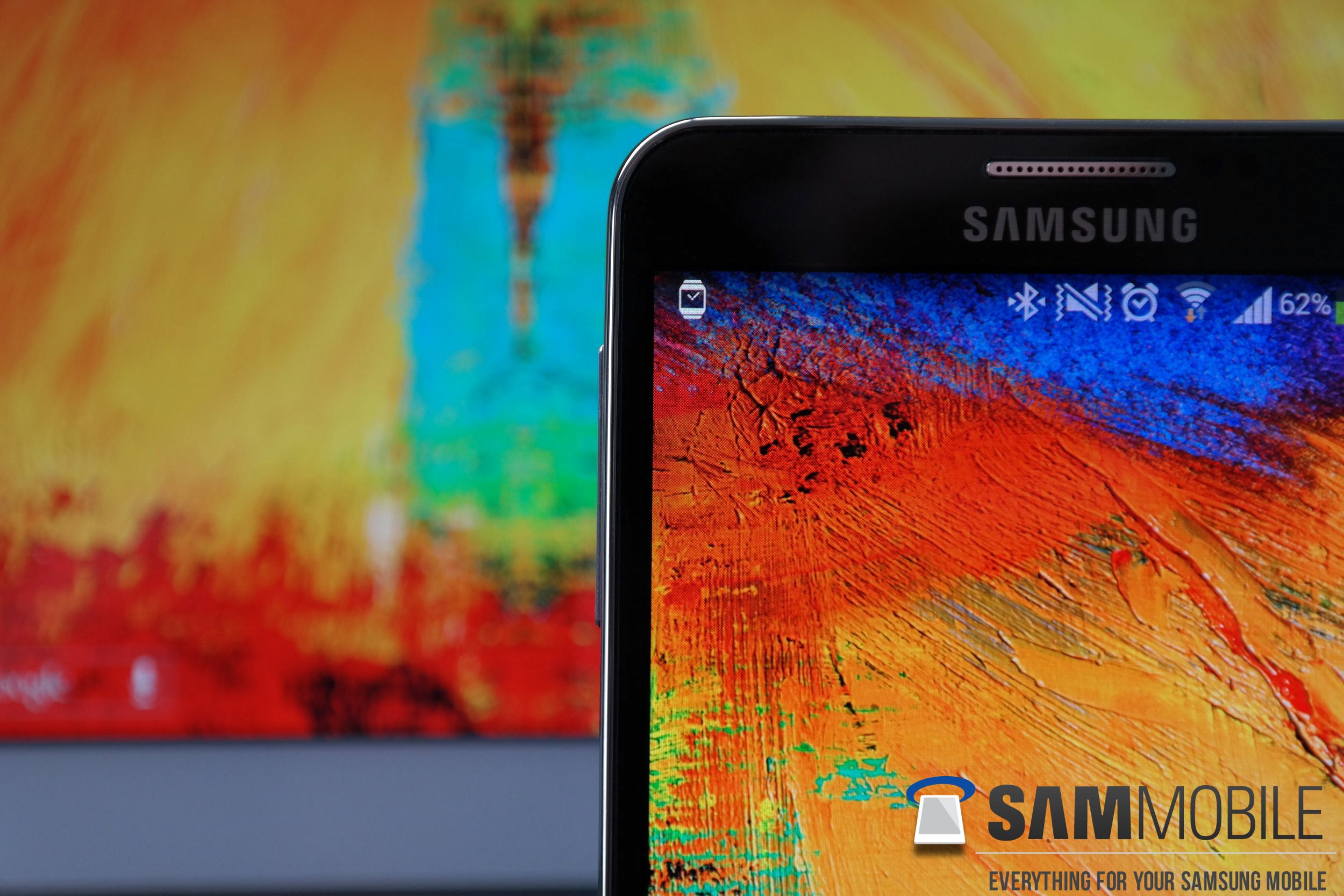 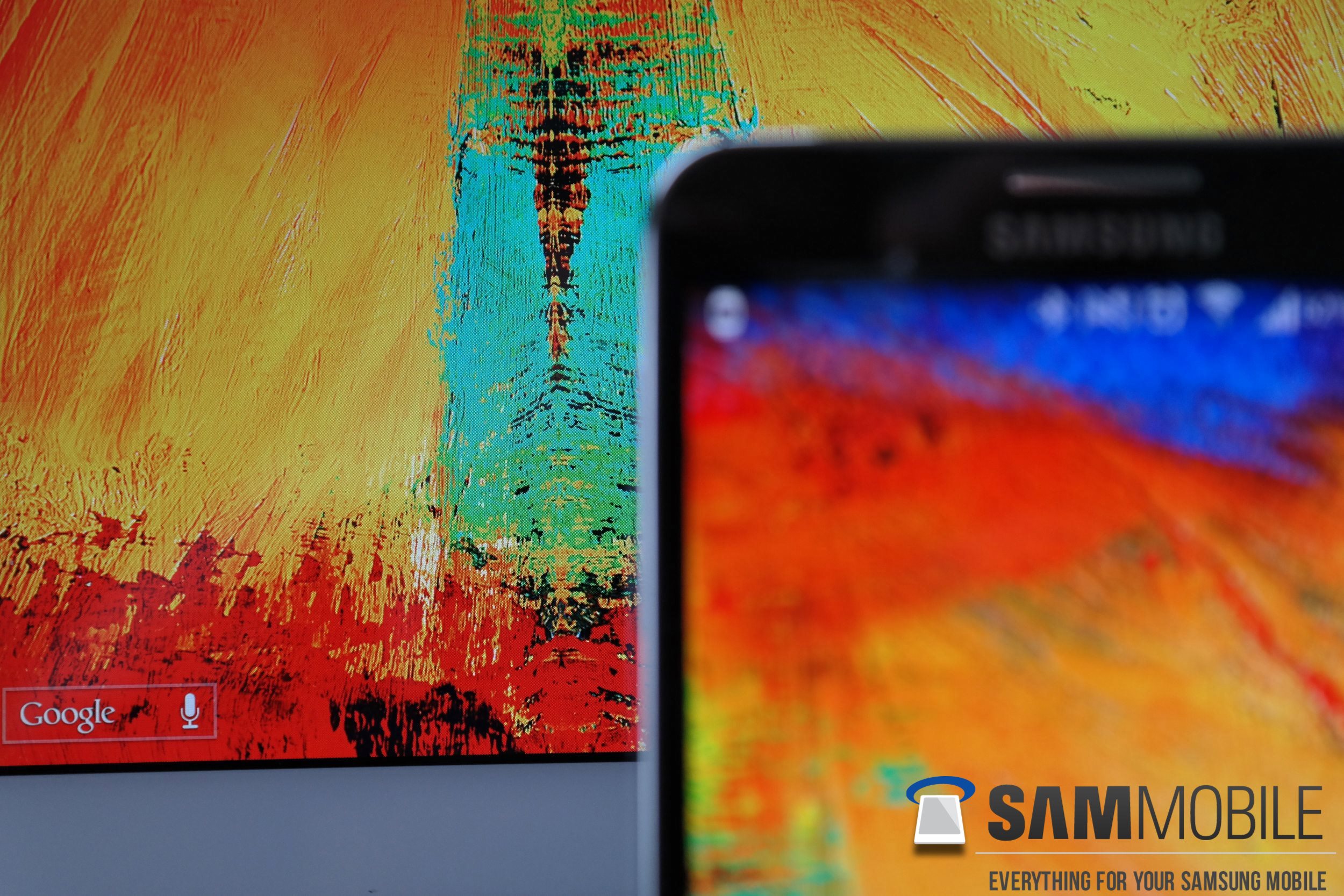 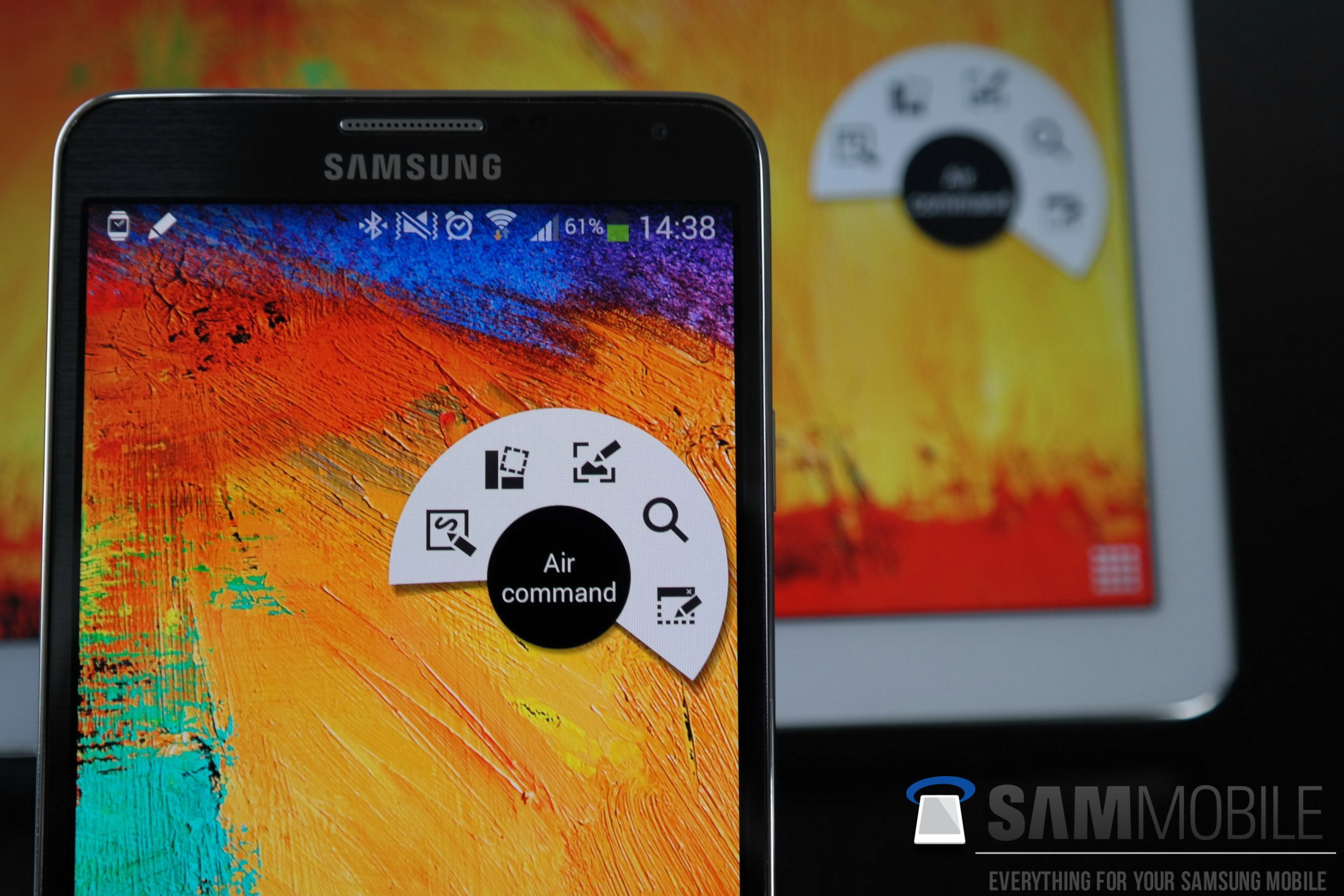 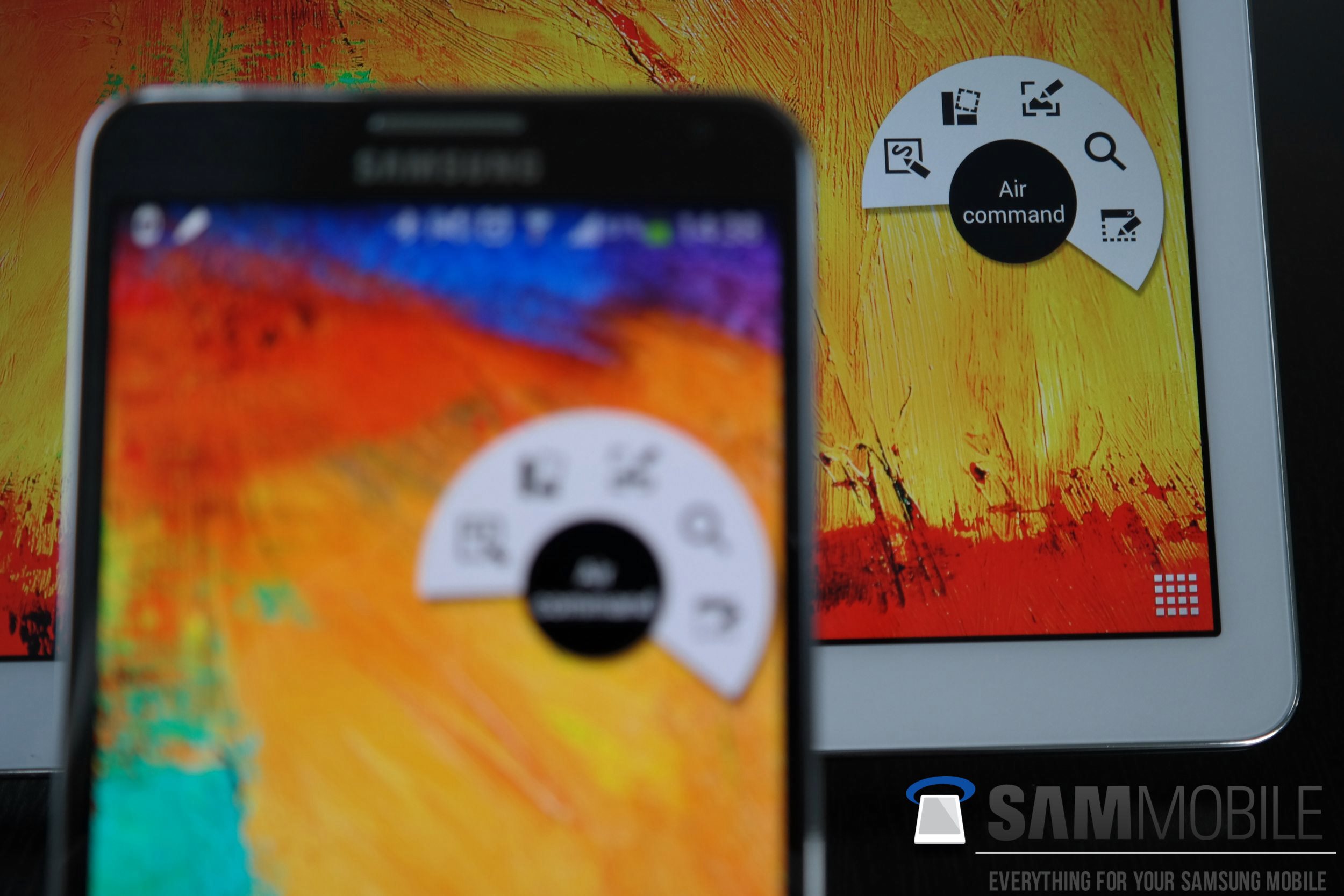