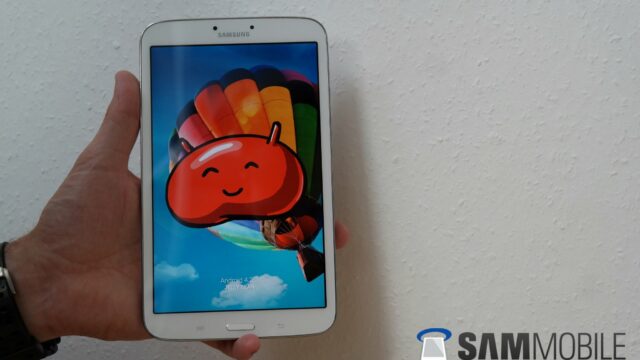 When Samsung announced the Galaxy Tab 3 line-up, they decided to add an in-between size between the small tablets (7”) and the regular tablets (10.1”). This was going to be the Galaxy Tab 3 8.0, which (surprisingly) comes packed with an 8 inch screen and an thin bezel, comparable to the iPad Mini. Time for SamMobile to get their hands on this Galaxy Tab 3 8.0 tablet and to see what it’s really good for!

Design
With the Galaxy Tab 3 8.0, Samsung has put their first tablet with thin bezels (borders) on the market. This gives the tablet a better feeling when holding it into your hands. You also instantly notice that the screen is 8 inch instead of 7 inches. We think the new thin bezels are a perfect improvement over their other bezels used in the past. You do not experience any discomfort while holding it or touching the side of the screen. Also, this thin bezel is a good in-between bezel size to get people used to the next generation of ultra-thin bezels in Samsungs product line. We expect that a lot of manufacturers will improve their device line with thinner bezels (like the Galaxy S4) to be able to put a larger screen in a device with the same dimensions. A good movement as far as we’re concerned!

As you can see in the listing above, the tablet uses a home button and touch buttons too. At first sight, it might not look very appealing but it works quite fast in real-life usage. However, we still hope that Samsung will come up with another way of handling with the device navigation without physical buttons. In our opinions, the Samsung Galaxy Tab 7.7 is still the most appealing tablet because the front of the device looks pretty much like a photo frame. Below you will find some design pictures of the Galaxy Tab 3 8.0: 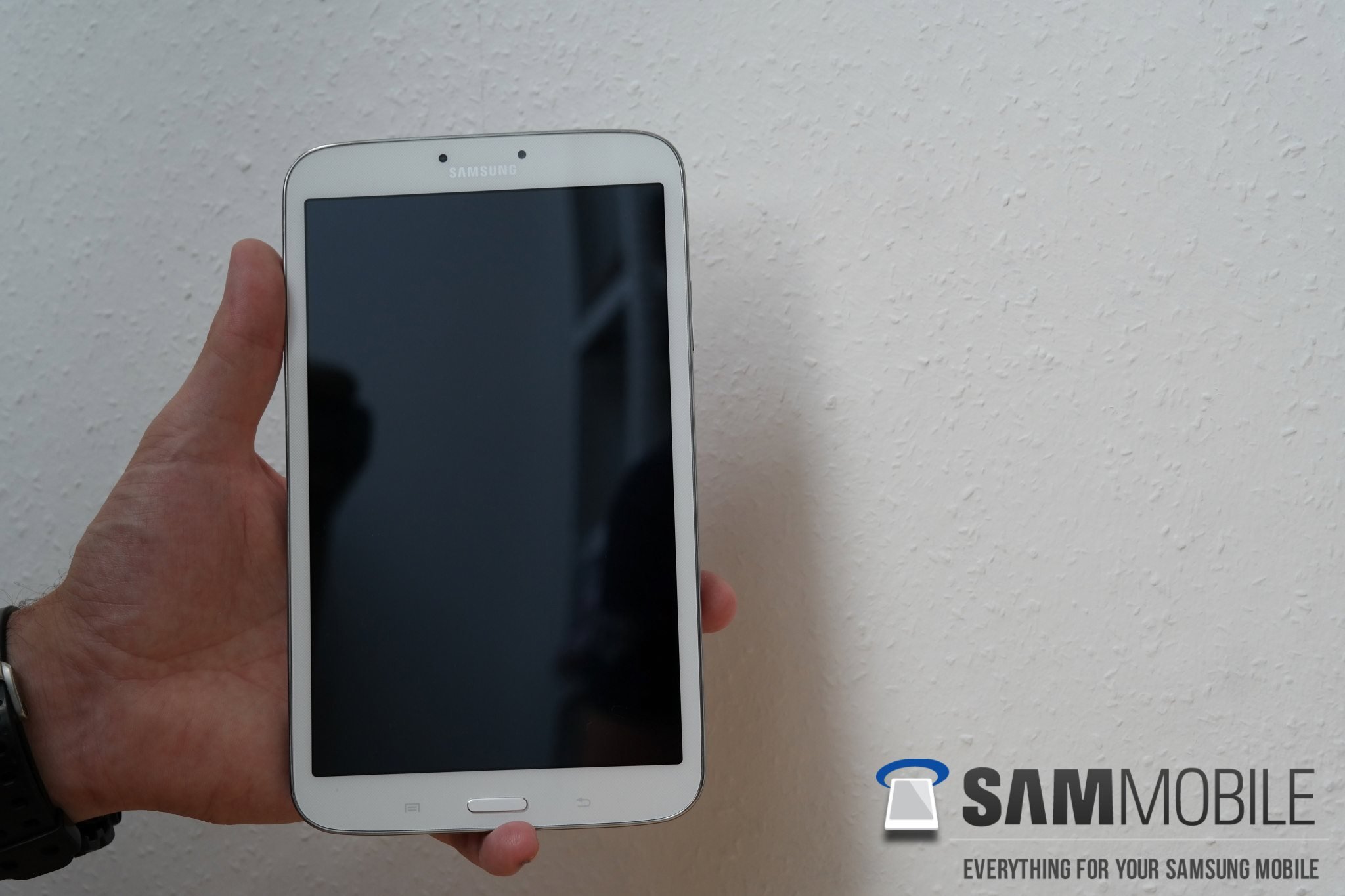 Interface
Samsung is shipping the Galaxy Tab 3 8.0 with Android 4.2.2. As usual, Samsung has added their own TouchWiz Nature UX layer on top of the operating system. This layer is pretty well-known from devices like the Galaxy S3 and the Galaxy S4. The S4 is actually packed with the exact same version of their TouchWiz Nature UX. TouchWiz is known be easy to work with, and it’s user-friendly too. This is exacly how we’ve experienced TouchWiz on this device. It’s easy to navigate through the complete interface of the device and all features look very organized. We expect this device to be upgraded to Android 4.3 later this year. Google has announced Android 4.3 at the end of July this year.

Most of the people here already know Samsungs TouchWiz Nature UX software pretty well, which is why we won’t discuss this feature more in-depth in this review. We however do recommend you to watch our video at the top of this review, where we will give you a quick glimpse of the Galaxy Tab 3 user interface. 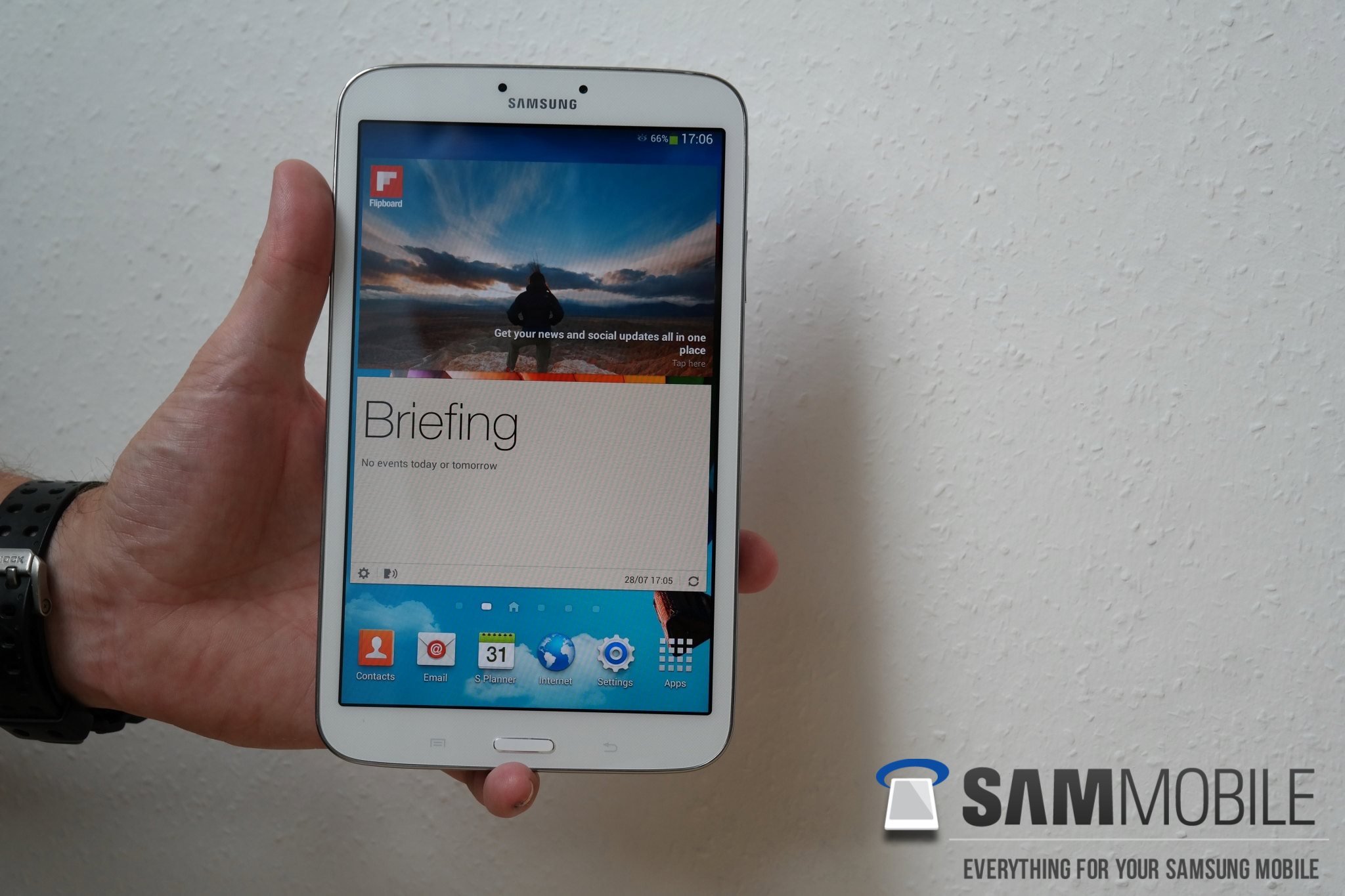 Multimedia
As mentioned before, the Galaxy Tab 3 8.0 does not come with all Samsungs smart functions. It does come packed with the so-called group play feature, which is also found on the 7 and 10.1-inch models in the same device range. Group play is a pleasant way to share photo’s, music and documents with your friends.
From our side we don’t have any complaints about the multimedia options the device has. Most of the multimedia formats people use nowadays can be played seamlessly. The device does not come with an FM radio. Starting with the Galaxy S4, Samsung has decided to remove the FM radio as, according to them, more and more people use streaming music services and that means less usage of the FM radio.
Regarding multimedia storage space, this was really decent on our tested device. From the 16GB internal storage our devices has, it had 11GB available as free storage and only 5GB was used for the operating system and Samsung applications. If needed, you can always expand the storage space by using a MicroSD card (with a maximum size of 64GB).
As the device comes packed with 1.5GB of RAM memory, the tablet is fast enough to actually do multiple things at once. When you unbox and start the device, it has around 675MB RAM in use, which means the remaining RAM is free to use for you and your applications.

Screen
Samsung has put the Galaxy Tab 3 8.0 on the market as a mid-range device, which means the price is a bit below the average (high-range) tablets Samsung usually releases. This means they had to cut some corners to get to that lower price, and in this case they have cut corners on the screen. They are using an 8 inch LCD screen on this device with a pixel density of 189ppi (pixels per inch). The resolution is only 1280×800, which could negatively impact the user experience. With 189ppi, the average human eye is able to see pixels in the screen.
On the other hand, the colors of the screen are still very good and living. The LCD screen technique makes the colors very close to real-life colors. Compared to AMOLED-screens, the black color is less dark but overall the screen is good. Not perfect but good enough for the price.

Camera
Samsung has equipped the Galaxy Tab 3 8.0 with an 5 megapixel back camera and an 1.3 megapixel front camera. We are glad that Samsung has decided to use the new camera interface on this device. This new interface is used a lot in the Galaxy smartphone range of Samsung. Thanks to the 5 megapixel back camera, the photo’s and video’s are of a reasonable quality. Recording 720p HD video is also possible with this camera. The maximum photo resolution is 2560×1920 pixels. Below you will find some pictures and video’s taken with the device:

Performance
This device comes with an 1.5GHz dual-core processor from Samsungs own Exynos range. Samsung Exynos is know for it’s powerful performance. One thing that caught our attention, was the fact that the software didn’t feel quite finished when we used the device. This made the tablet feel a bit slow sometimes. We expect Samsung to solve this in an upcoming software update. This should improve the processor performance then. Compared to the other Galaxy Tab 3-range tablets, the 8 inch model (with it’s 1.5gb RAM) is the fastest of the range based on raw performance.

Battery
During our testing period, we noticed that the tablet’s battery life was really decent. When playing on the tablet all day, including playing videos and surfing the internet, we could use the tablet for more than one day. We expect the casual user to last for about 3 days on one battery charge, the more hardcore user should probably charge the device after every day of usage. The battery capacity of the Tab 3 8.0 is 4450mAH which is pretty good for this device. In general, we think the battery is very good!

Summary
We’ve now come to the final part of this review, and to put our conclusion into one sentence, we can’t describe it otherwise than the best Galaxy Tab 3-variant in the mid-range pricerange. The screen is pretty much the only place where we could see where Samsung decided to cut corners to make it a mid-range device. Because of the thin bezels, the tablet has a great size to hold and the screen seems very large. As usual, Samsung gives the consumer the choice to pick their perfect size of the Galaxy Tab 3-range. We can tell them that in our experience, the 8 inch model is the perfect size. It’s also good to see that Samsung has packed this device with a perfect interface, as the only device in the Galaxy Tab 3-range. This is mainly due to the new camera interface and the decent smart functions. The tablet is running Android 4.2.2 which means the software is pretty much up to date with it’s Android version at the moment. We expect this size to be the best selling size in the Galaxy Tab 3-range and that Samsung will make it even faster with upcoming software updates.

We expect Samsung to announce a new series of high-range tablets in September! So keep your eyes on SamMobile around that time if you decide to wait a while for an more expensive, high-end tablet.