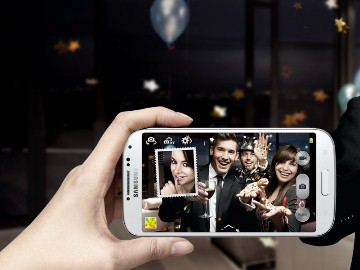 Samsung might bring Samsung Orb from the Android 5.0 update for the Galaxy S 4. Samsung Orb is a feature to make a panorama photo’s in 360 degrees. A couple of Google Nexus devices are using this feature under the name of “Photosphere”.

Samsung Orb has to be easily connected with the social media channels Twitter, Facebook and Google+ at the first place. The Samsung’s Orb feature is rumored before but didn’t make it for the Galaxy S 4 launch. The decision isn’t final yet but is expected says our insider. Samsung announced the Galaxy S 4 with a 13 megapixel back camera and a 2 megapixel front camera. Samsung added a couple of new camera features inside the Galaxy S 4. One of the features can be view below. This feature called dual-view the front and back camera are on one the same time.

Your country will get Exynos or Snapdragon variant of the Galaxy S 4, …

There are too many question about the processor of Samsung’s flagship model the Galaxy S 4. Samsung will …

Yesterday you could already saw a preview of the special Game Pad for Samsung Galaxy S4. Today game developer …

We have some bad new for all custom rom freaks out there! Famous custom rom maker CyanogenMod will not support …

Just last week Samsung announced the Galaxy S 4 and it has beaten every device on the market at the moment. Sa …