The Galaxy J5 and Galaxy J7 – and the Galaxy J3 in some markets – have had a pretty good run, so Samsung is naturally looking to further expand its budget lineup with new devices. The company’s plans of releasing multiple devices with new model numbers were revealed earlier this year, and the Galaxy J4 and Galaxy J6 were among the list. Both phones are now one step closer to launch, as they have received certification from the Wi-Fi Alliance.

Galaxy J4 and Galaxy J6 get their Wi-Fi certification

As one would expect, both devices were certified running Android 8.0 Oreo, though these won’t be the first budget phones from the company to launch with the latest version of the OS. The only other specs that are currently known for these phones are the processor and amount of RAM. The J4 was spotted with the Exynos 7570 quad-core processor clocked at 1.4GHz, while the Galaxy J6 was benchmarked with the Exynos 7870, the chip we’ve seen on both the Galaxy J and Galaxy A series phones before. Both phones have 2GB of RAM, which seems a tad too low but is probably a result of Samsung looking to put the Galaxy J4 and J6 in a segment that doesn’t clash with those occupied by the Galaxy J5 and Galaxy J7. 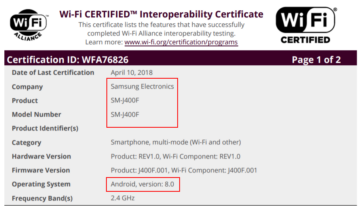 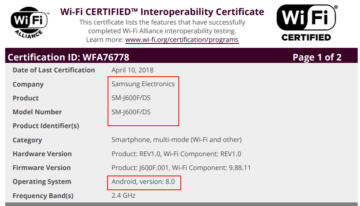