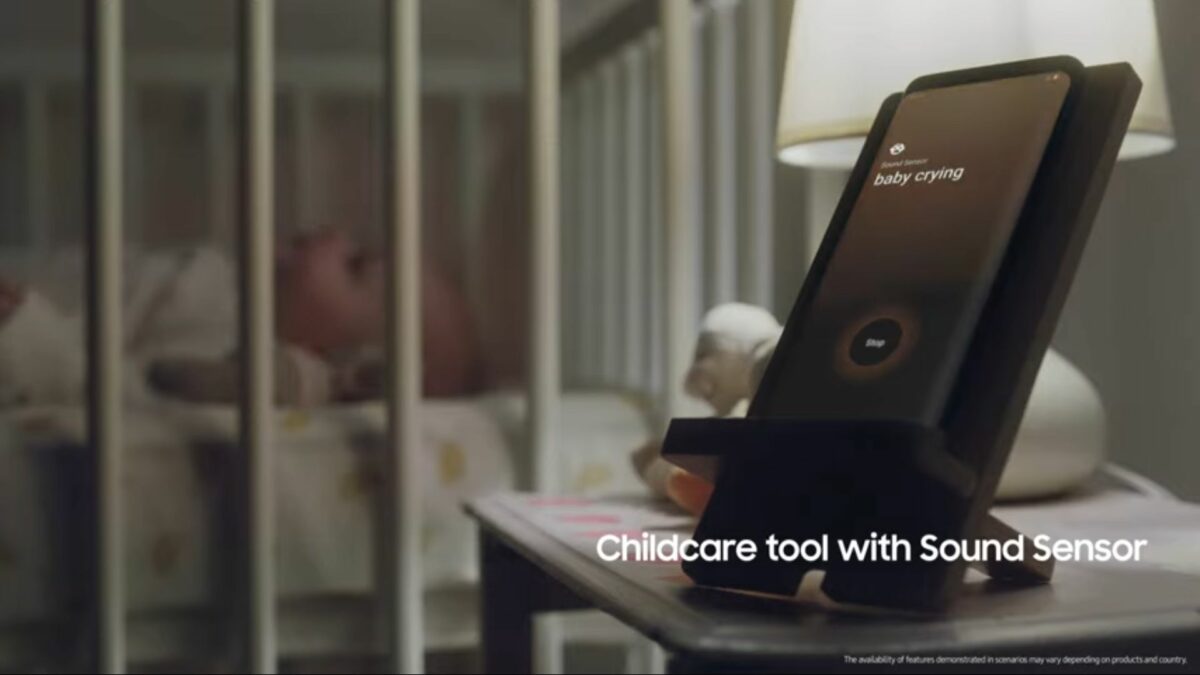 Samsung’s Galaxy Upcycling program that was introduced all the way back in 2017 is about to reach consumers in a whole different way. The program, which was created as a way to prolong the life of old Galaxy devices by repurposing them, will soon expand with a new update called Galaxy Upcycling at Home.

At CES 2021 Samsung revealed that it will be updating the software of older Galaxy phones later this year, and this will allow owners to repurpose them as new IoT devices. In an example shown by the company in the recent Upcycling presentation video for CES 2021, the company turns an old Galaxy phone into an IoT baby monitor. The repurposed phone picks up and monitors the audio, then it sends a notification whenever it senses a baby crying.

Up until now the Upcycling program hasn’t been fully available to the general public. It was more of a testing platform for the company to exemplify how old tech could be repurposed. Back in 2017 Samsung demonstrated the concept by turning a bunch of old Galaxy S5 units into a Bitcoin mining rig, and last year Samsung demonstrated a medical eye scanner that was powered by an older Galaxy phone.

The Upcycling at Home update will bring the program to the forefront like never before, as it will empower consumers with the necessary tools for repurposing their smartphone into IoT devices depending on their needs. And because most Galaxy phones benefit from the Knox security suite, these IoT home devices resulted from the Upcycling at Home program will be highly secure without requiring anything extra.

Most of us have a couple of old phones lying at the bottom of a cabinet we haven’t opened for quite some time. These relics now gather dust as they serve no purpose since we’ve moved on to newer devices. In its efforts to reduce waste, Samsung has launched a new initiative that lets you […]

Three and a half years in, the Galaxy Upcycling initiative is still going strong. In fact, it’s getting more fascinating by the day. Cue this week’s story from the Far East, where Samsung successfully repurposed a bunch of its old flagships with the express purpose of fighting blindness and other comparably severe ophthalmology diseases. The resulting […]

Samsung’s CES 2021 live-stream-slash-virtual-event set a new viewership record for the company, having amassed over 30 million views on YouTube within the first 24 hours. That’s a massive improvement over last year’s showing whose opening keynote and subsequent announcements generated some eight million views in total  – to date. In contrast, the “Better Normal for […]

CES is the place where consumer electronics companies can showcase less conventional products and demonstrate how their technologies could change our lives for the better. Samsung has done exactly that at CES 2021 when it unveiled a new household robot powered by artificial intelligence (AI). It’s called Samsung Bot Handy and despite the name, it […]

Samsung has showcased its next-generation Digital Cockpit for connected cars. Powered by Harman’s automotive technology, Digital Cockpit 2021 comes with multiple screens inside and outside the car. It also features 5G connectivity, enhanced safety, and a comfortable user experience. The company wants connected cars not to be limited to just transportation but to become comfortable […]