Galaxy A8 (2016) benchmark reveals its specifications

Samsung unveiled the Galaxy A8 back in July last year so it’s about time that this handset was refreshed for the current year, Samsung has already done that with the other Galaxy A series handsets so the Galaxy A8 is next in line. It does appear that the company is working on the Galaxy A8 (2016) because the handset has now been spotted on GFXBench where its specifications have been revealed.

If the benchmark result is anything to go by, the SM-A810 or the Galaxy A8 (2016) features a 5.1-inch full HD Display, a 2.1GHz Exynos 7420 processor with 3GB RAM and 32GB of internal storage. I should point out here that the original Galaxy A8 has a 5.7-inch display, it’s unlikely that the display size will be reduced as Zauba import logs for the SM-A810 also mention a 5.7-inch display. The benchmark also mentions a 16-megapixel rear and 5-megapixel front camera as well as Android 6.0.1 Marshmallow. There are no details available as yet about any design changes made to this handset but since we didn’t see Samsung make any major changes to the rest of the updated Galaxy A series, it’s unlikely that we’ll see a major change in the Galaxy A8 (2016)’s design. The Galaxy A8 is one of Samsung’s most feature-packed mid-range smartphones and it’s successor is likely going to stick to the script. It’s unclear at this point in time when Samsung is planning to launch the Galaxy A8 (2016). 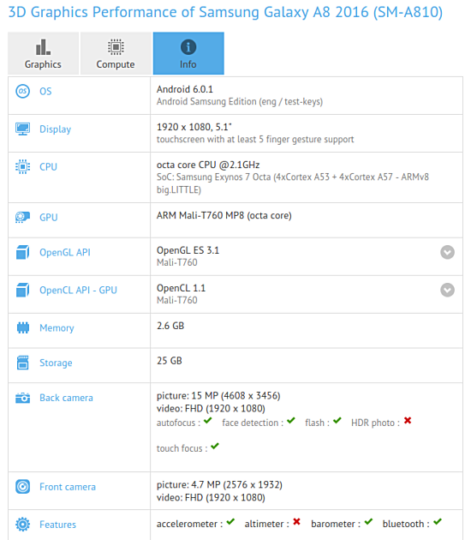