The Galaxy Note 7 is expected to break cover by early August. As we lead up to the big day, it’s only natural that we’ll encounter a handful of leaks pertaining to the device. While most recent leaks have been talking about the name of the handset (Galaxy Note 6, Galaxy Note 7, Galaxy Note 6 edge among a few others), we’ve sparingly heard about the hardware of the phablet. We exclusively broke the story about the Note 6/7 featuring an iris scanner, while also revealing that the device would be water resistant like the Galaxy S7 and the S7 edge.

We’re hearing about the iris scanner yet again, thanks to a couple of screenshots posted online. The screenshots are available in Korean and Chinese, which almost confirms its authenticity. The third onscreen option supposedly says “use iris”.

The screenshot reveals the settings page, where the option to use your fingerprint or PIN is also visible. Needless to say, these are pretty convincing screenshots and could be one of the highlight features of the upcoming Note flagship. Samsung recently released the iris scanner enabled Galaxy Tab Iris in India, so if these leaks are indeed true, the Galaxy Note 7 won’t be the company’s first device to utilize the sensor.

But with that in mind, we must be mindful that screenshots are not hard to doctor. So make sure you take this with a large dosage of salt. Do you think this is the real deal? 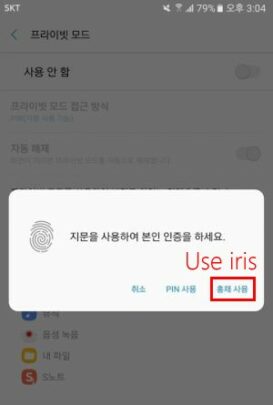 I sure hope the note 7 comes with the iris scanner. I did not know they had released one on a tablet already. This makes me even more excited since they have probably worked out a number of issues that can come with a first time release. I hope it is quick an accurate.

It would be nice, and a great surprise. The fact that they have a device just released with an iris scanner, makes it slightly more a possibility, but my feeling is it won’t be there. Samsung are always surprising us though….so maybe!!