The Samsung Galaxy M31s is the Korean company’s first smartphone in the Galaxy M series to feature a Super AMOLED Infinity-O display with a centered cutout for the selfie camera. It looks rather similar to the Galaxy A51 – a device that punches above its weight in terms of specs and pricing.

This appears to be a relatively common theme for the Galaxy M31s. It’s characterized by a few features that would normally be found on higher-end models, but it still retains amenities such as a 3.5mm headphone jack, all the while maintaining a relatively affordable price. Samsung’s Galaxy devices that bear the ‘s’ suffix are meant to be updated versions of existing phones. Therefore the Galaxy M31s is an updated version of the Galaxy M31, but there’s no denying that the newer model takes this philosophy to heart more so than other devices of its kind.

Once again, the Galaxy M31s looks quite familiar to anyone who has seen a Galaxy A51 before. The former device doesn’t have the bold prismatic pattern on the back panel, but it does have a similar Infinity-O display with fairly thin bezels, as well as an L-shaped quad camera on the back panel. 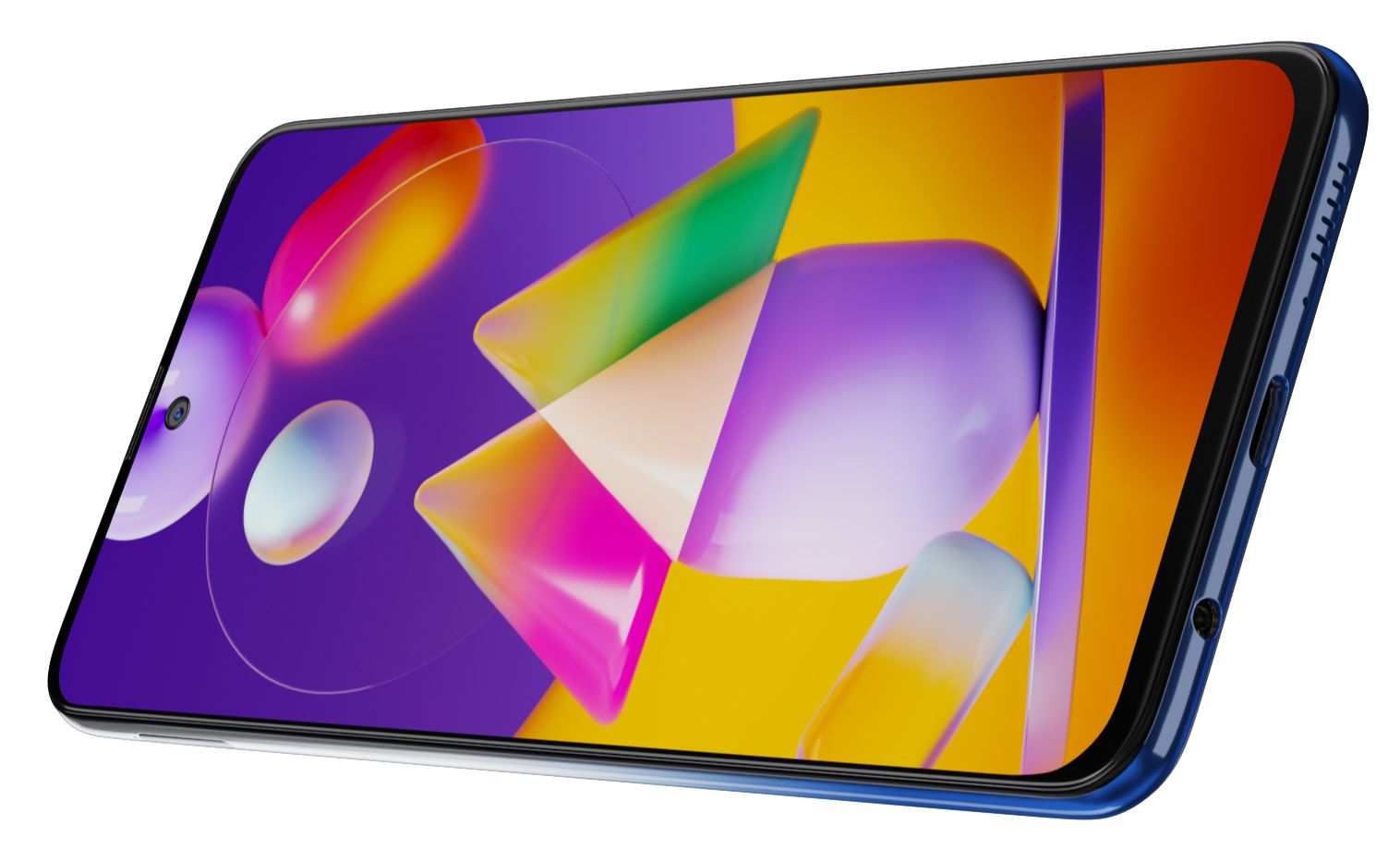 The phone has physical buttons on the right edge and has a clean back panel devoid of a fingerprint scanner, as the biometric sensor has been embedded in the side key/power button. The phone was announced in two color options called Mirage Black and Mirage Blue.

Amazon India had already confirmed some of the phone’s specifications ahead of its release, while other specs were confirmed by an early Google Play Console listing. The information that was revealed through these channels corroborated many previous leaks which turned out to be correct.

These components are driven by a 6,000mAh battery that not only supports 25W fast charging akin to Samsung’s flagship phones, but also boasts reverse charging. Samsung claims that the battery can be fully-recharged in only 97 minutes. This is a significant step up from other devices with 6,000mAh batteries and 15W charging, as they normally require around 2.5 hours to get to 100% charge.

25W fast charging is a fantastic addition for the price point and this strategy should help Samsung gain some market share. Other specs worth noting include dual-SIM capabilities, LTE, Bluetooth 5.0, LTE, NFC, USB-C, and a 3.5mm headphone jack.

Samsung has fitted the Galaxy M31s with a FHD+ display. As previously mentioned, this is a Super AMOLED panel and it follows the Infinity-O design language with a centered cutout.

Galaxy fans who have used smartphones featuring Super AMOLED panels before should know what to expect in regards to colors and contrast. It should be a top-notch experience, in short.

The selfie camera residing inside the Infinity-O display cutout has a resolution of 32-megapixels and an f/2.2 aperture. The Galaxy M31s is capable of 4K video recording with both the front and rear cameras.

This makes the Galaxy M31s a very competent device in terms of mobile photography, at least for its class, but what’s even more special about this device is that it boasts the Single Take camera mode. This is a very convenient feature that debuted with the Galaxy S20 lineup and it’s now making its way onto the budget-oriented Galaxy M series thanks to the Galaxy M31s.

The Galaxy M31s ships with Android 10 and One UI 2.1 out of the box. Once again, some high-end features like Single Take camera mode have snuck into this budget phone, so the device provides a more complete One UI 2.1 experience than other smartphones in the Galaxy M series.

Samsung hasn’t made any comments on compatibility with DeX and/or Samsung Pay, as these features seem to be missing. Not a surprise given that they are usually reserved for higher-end phones.

The Galaxy M31s was scheduled to hit the Indian market on August 6 through Samsung’s retail partners including Amazon.in.

Samsung has set a starting price of INR 19,499 for the model with 6GB of RAM, whereas customers who may want to buy the 8GB variant are looking at an INR 21,499 price tag. The phone ships with a 25W fast charger in the box.

We offer various Samsung resources to our readers, such as Samsung firmware, APKs, and wallpapers, all of which can be downloaded for free. SamMobile’s premium plans provide extra benefits such as faster firmware downloads, ad-free browsing, the ability to participate in giveaways and more.