The Galaxy M31s will be unveiled later this month and go on sale sometime in August. Ahead of the official announcement, Samsung teased some features of the upcoming mid-range smartphone, including an Infinity-O display, a 64MP quad-camera setup, and a 6,000mAh battery. Now, the phone’s processor has been confirmed via its Google Play Console listing.

Going by the information revealed via the Galaxy M31s’ Google Play Console listing, the smartphone will be equipped with the 10nm Exynos 9611 processor, 6GB RAM, and Android 10. It also reveals the phone’s screen resolution: 2400 x 1080 pixels. Given that there’s no rear-facing fingerprint reader on the phone, it could come with an in-display optical fingerprint reader.

The Galaxy M31s is expected to be priced around the INR 20,000 (around $267) mark. It will feature a Super AMOLED screen with a center-aligned punch-hole cutout for the 32MP selfie camera. It has a quad-camera setup at the rear, consisting of a 64MP wide-angle camera, an 8MP ultrawide camera, a 5MP depth sensor, and a 5MP macro camera. It is also the first Galaxy M series device to feature the Single Take camera mode.

We had exclusively revealed two months ago that the smartphone will come with 128GB internal storage. However, there could also be a variant with 64GB internal storage, given its mid-range positioning. The phone has a 6,000mAh battery with 25W fast charging and reverse charging. Other features could include dual-SIM card slot, microSD card slot, LTE, Wi-Fi 5, Bluetooth 5.0, NFC, USB Type-C port, and a headphone jack. 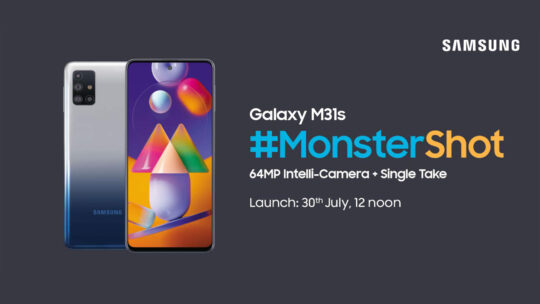