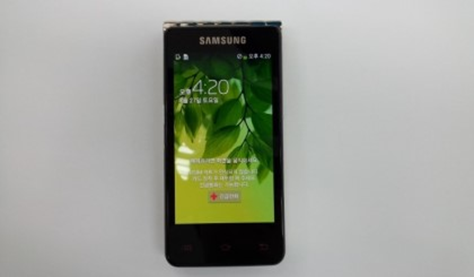 That clamshell flip phone Samsung is working on is something we had hoped would turn out to be just a fantasy concocted in an alternate universe, but it has now shown up in the clearest pictures yet, confirming that Samsung will be going forward with this blast from the past. There’s also word that instead of Galaxy Folder, Samsung may market it as Galaxy Golden.

The specs have already been revealed thanks to the leaked user manual. We’re looking at dual WVGA screens of AMOLED type, a 1.7GHz quad-core Snapdragon 400 processor, 2GB of RAM, two cameras, Wi-Fi, Bluetooth, GPS, NFC, and LTE support, FM radio, a 1,820mAh battery, and Android 4.1.2 Jelly Bean. The specs are quite respectable (though I doubt we’ll see 2GB of RAM, 1.5GB RAM seems more likely, if not just 1GB), but again, a keypad-toting phone isn’t exactly something people were asking for.

But hey, choice is good, right? The Galaxy Golden aka Folder is expected to arrive in Korea this month for carriers SKT and KT and possibly in China for China Mobile, and we’ll be waiting to see whether Samsung brings it to other markets (don’t keep your hopes pinned on that happening).

We first found out about two months ago that Samsung has a new Android-powered clamshell smartphone in the pipeline. It’s the successor to Samsung’s Galaxy Folder handset – predictably called the Galaxy Folder 2 – and it looks like the handset is going to be unveiled soon. After making its customary FCC pit stop and […]

Samsung isn’t done with flip phones, as the company is testing a new smartphone with the classic (and outdated) form factor. A Samsung SM-G1600 can be seen on the import tracking site Zauba, with a screen size of 3.8 inches. That’s the same as the Galaxy Folder’s display, making it a surefire hint that we’re […]

Latest data released by SK Telecom shows that in South Korea’s smartphone market the 64GB iPhone 6S is the top pick in the premium segment with the 16GB version of this very handset in second place. Only the 64GB Galaxy Note 5 came in third place with a 13.8% market share. It’s a similar story […]

A new Samsung announcement brings us an exciting successor to last year’s Galaxy Folder and a worthy competitor to LG’s recently announced G Gentle. There are many notable changes this year and it’s going to be very affordable when it’s released in South Korea next month. Samsung never quite gave up on flip phones. Every […]