The Galaxy Note 9 is reportedly going to be offered in five different colors at launch and we’ve seen almost all of them in leaked renders. The Coral Blue/Deepsea Blue Galaxy Note 9 render appeared online just yesterday. Today, we get to see a new leaked render which shows what the handset will look like in Teddy Brown.

Teddy Brown is a new color option for the upcoming flagship. The color option was previously revealed by model codes for the Galaxy Note 9’s new S Pen. This is the first such render that we’re seeing of this hue.

The leaked render appears to have originated from an online retailer’s website as it also features the Gear IconX earbuds, DeX Station and the Gear S3 smartwatch. These accessories may be offered as promotional items with the new flagship smartphone by the retailer.

Perhaps the upcoming Galaxy Watch may not be offered with the Galaxy Note 9 as part of a promotional deal. Samsung’s upcoming smartwatch is reportedly going to be announced alongside the Galaxy Note 9 on August 9. Not only that, Samsung is even expected to release it alongside its new flagship smartphone on August 24.

The S Pen’s color will not necessarily be matched to the body. It appears to be the case for the Midnight Black and Teddy Brown Galaxy Note 9 but not the blue handset which has a two-tone blue and gold S Pen. This two-tone finish for the S Pen has been seen in leaked Galaxy Note 9 promotional material as well.

The other color options for the Galaxy Note 9 include gray and Lilac Purple. Only the gray hasn’t surfaced in a leaked render as yet. The Midnight Black we have already seen in leaked live images of the Galaxy Note 9.

You can expect such leaks to keep coming in. We’re only a couple of weeks away from the official launch of the Galaxy Note 9 at a special event in New York City on August 9. 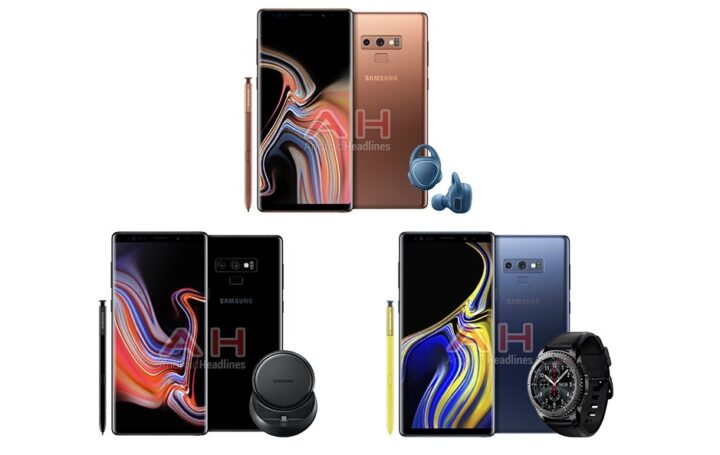